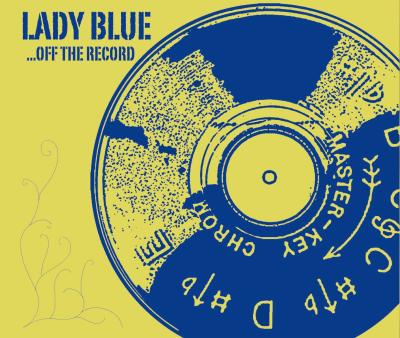 Duke University's Lady Blue has a solid female sound on Off the Record. Sultry altos, mellow sopranos, and vocal percussion that is above average for female groups helps bring them into an area of relevance for most listeners. How relevant might be a question open for discussion.

Lady Blue is certainly above average in a few categories (Soloists, Tuning) and very average in a few others (Innovation/Creativity, Sound/Production). Tatianna Mott and Stephanie Oh really kick off the recording with convincing leads on How to Save a Life and Unfaithful. Lady Blue actually made me resist the natural temptation to skip How to Save a Life mid-listen. Their take on The Fray was their own, which made the lyrics relatable instead of drab, the way most groups cover this song. Suddenly the words had meaning instead of just taking up space on the recording. My favorite track was Like a Boy originally by Ciara. Lady Blue really finds its groove here, reminding me of University of Oregon's Divisi for a moment.

The recording holds its own for the first four tracks and then falls flat with a pedestrian version of Blind Melon's No Rain, exchanging the contemporary arrangements heard earlier for a predictable and simple arrangement that's just not up to the task of hanging with their best sounds. From there we get tracks that feel more like filler than impressive. Anika Dittmar's overly affected Joss Stone is a put off, as if she's trying too hard to be stylistically correct, and Signed, Sealed, Delivered I'm Yours is so deliberate it has zero style. "Beer, beer, beer, beer" is probably not the best opening a listener could hope to discover in a Stevie Wonder song.

Off the Record is a like a single with a hip A side that the masses will surely enjoy, and an okay-but-not-great B side that only a fan could really love and treasure. This leaves Off the Record slightly above average overall. If you're a fan of Lady Blue or of female a cappella, it might be worth checking out.

Take note of this event: A Tar Heel is about to say some nice things about something Duke-related.

Lady Blue's Off the Record achieves a refreshing balance of natural a cappella sound and appropriate post-production techniques. While many groups have a tough time straddling the line between bland, vanilla performances and ear-shattering overproduction, this all-female Duke group achieved a nice compromise. Hats off to 'Dio and his team at diovoce for a job well done on this project.

That's not to say that the group itself isn't talented in its own right. The well-engineered tracks are enlivened by strong soloists and thoughtful arrangements. Although the set list could have been a bit more varied (two Blind Melon songs in a ten-track record?), most every song is widely appreciated and well known. Some are done justice and then some, including the energetic Like a Boy (featured on Voices Only 2009) and the surprisingly tight No Rain. Like a Boy has a great groove and sounds smooth as butter. No Rain is extremely well composed and full of energy. And I have to mention Super Duper Love, which features powerhouse soloist Anika Dittmar and a wonderful multi-layered arrangement. Most of the tracks have elements personalized by Lady Blue to help them feel fresh. Even the overdone songs, such as How to Save a Life, sound like new. In general, the songs are well performed through and through.

Some, however, fall a bit flat. Man in the Mirror feels a bit rushed, and the lack of solo harmonies is a bit disappointing. Similarly unremarkable is Signed, Sealed, Delivered I'm Yours, which suffers from a confusing lack of energy and an average soloist. Then, of course, there's the live track at the end, which was a real misstep. Throwing a less-than-stellar concert recording at the end of a polished album not only makes it sound worse by comparison, but also unfortunately makes the listener wonder what exactly it was he was listening to before. I have faith that this group is genuinely talented, but they sure didn't show it in their grand finale.

Overall, though, Off the Record is a solid CD with a few stellar tracks and a few misfires. If you can easily part with $15 (plus $3 for shipping), I'd say give this one a go. It's definitely a better use of your time than, say, watching the Duke basketball team. Kidding. Sort of.

With Duke's Lady Blue, the emphasis is on the word "Lady": The ten arrangements on Off the Record are all very sweet and very ladylike. That's not to say that they're prim or stuffy, but these ladies definitely put a pure, pleasant sheen on pop/rock numbers like How to Save a Life and Man in the Mirror. That can be either good or bad, depending on your preference. Either way, there is an admirable consistency to the polished spin that this group gives to these tunes.

How to Save a Life, especially, is so gentle it shimmers, and No Rain bounces cheerfully along with its backing "bop-bop-bop"s. Even angstier numbers like Ciara's Like a Boy have an air of sweetness under Lady Blue's touch.

But there is a fine line between sweet and saccharine, and Lady Blue's tender sound sometimes belies the original meaning of a song. Bless the Broken Road is so soothing you just don't believe that there could be anything broken about the road the narrator has traveled. The arrangement itself is fine (other than its awkward transitional "jim-jo-doe-aww" syllable choice); the group's performance of it just lacks the sorrow and the soul implied by the song's lyrics. Similarly, singing of cocaine in Hotel Song just sounds awkward: while these ladies can capture Regina Spektor's purity, they don't quite convey her pointedness, and so the song lacks emotion.

On the right song, though, Lady Blue's approach is quite enjoyable; their take on Rihanna's Unfaithful is both haunting and a different spin on the original. In short, if you prefer your all-female a cappella with a feisty edge, then look elsewhere. If you like it sweet and pretty, then Lady Blue is for you.