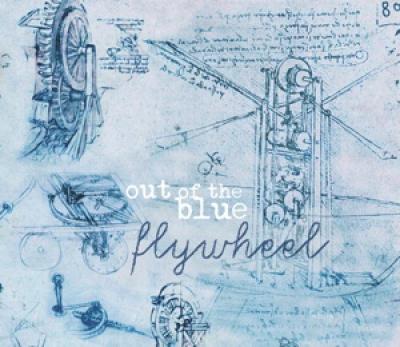 Let me begin with an apology to the editors: I submitted this review late. It was due on the 31st of January, but I just had to wait until midnight on the first of February to see if Flywheel would score any CARA nominations. It did — quite a few. I'm not surprised. The latest album from the ladies of Out of the Blue is full of sweet musical moments and fun, creative arranging choices. It's some of the most ear-catching work I've heard lately.

Georgia Hoyler scored not one but two arranging nominations for this album, and they are well deserved. One of the first things that grabbed me about this album was the creative use of textures (both sung and spoken) to compensate for the inevitable thinness that can be a barrier for a group of all female voices. When the low end and full spectrum of natural tuning possibilities aren't available, other sounds and techniques need to step in to fill the void. It's something the best recorded groups have mastered, and it's a real strength of Flywheel. Shouts, grunts, whispers, and neat vocal effects abound and keep the listener engaged.

A good word to sum up this album would be sultry. Lots of hot and heavy R&B (Keeps Getting Better), mixed with some gritty country (Last Name), and even some mysterious Middle Eastern sounds (Desert Rose) leave a seductive taste in your mouth. It's a generally engaging sound, but one that honestly grows a little tired over the course of the whole album.

Running a little long at 13 tracks, the whole experience might have been a bit more fun with a little more lighthearted material. It doesn't help that two of the best uptempo tunes are back to back, and hidden in the middle of the album (Ain't Nothing Wrong With That and I Don't Feel Like Dancing). Next time around, I would suggest either cutting a track or two, or having a better pacing of the happy and heavy songs.

Pacing aside, this is a really excellent album, and one worth owning. By the time this is published we'll likely know the fate of the 2010 CARA nominations, but I won't be at all surprised if Flywheel takes home one or two well-deserved awards. Grab yourself a copy and you'll see why.

Smooth. Slick. Polished. Duke's Out of the Blue has an album that bumps right out of the CD case. Production definitely brings some extra attention to its sound initially. As is the case with most collegiate albums, that initial push from production wears off by the third or fourth track. Fortunately for OOTB, the group has enough substance in its sound to draw in the listener and make them pay attention.

Flywheel is at its best when it showcases an R&B sound with its octavized altos, thumping vocal percussion, and its serviceable soloists. Keeps Getting Better, Bad Habit, and Are You That Somebody are prime examples of what OOTB does best. These women could probably corner the market on collegiate a cappella with their R&B sound the way Stanford's Everyday People did in the late '90s. It's that good.

That's not to say OOTB can't turn heads with a stripped-down acoustic sound. They produce admirable musical performances on Blue & White and Just for Now. Many groups would love to get near the level these ladies sing at in the less-is-more style. It's just that the change in sound from the one style to the other is so glaring and abrupt it takes a good while for the listener to adjust to what is good about each production style. This is probably why most artists release either a produced album or an acoustic album separate from each other.

Soloists are good at pinpointing the original artists' sound (Allie Theis on Last Name and Amanda Cummings on Cornflake Girl are good examples), but some miss the mark and try too hard to recreate a style. Seung Seo on Keeps Getting Better is often flat on initial attacks of phrases trying to mimic Aguilera's raspy R&B, and Hannah Hunt falls short of bringing us Sting as the melody sits too naturally in her voice, losing the energy Sting brings when he's reaching a bit for the same notes.

OOTB's arrangements aren't overly interesting when taken at face value, but the girls really make the most out of what they've been given and are very musical, crafting an artistic sound from start to finish.

At thirteen tracks, Flywheel might have been better served as two EPs of six or seven tracks each or maybe even a double CD that splits up the production values in the tracks into a more digestable album for the listener.

Out of the Blue is skilled at many styles, and while that's impressive, it might be even more impressive to take a specific style and just wow us in it from beginning to end. Flywheel is certainly an upper-tier collegiate album, and I think you'll enjoy it as it's on par with other top female groups in the country. As an album, though, it's really a mixed bag of sounds that don't really fit together from my point of view.

It feels completely sexist to describe Duke Out of the Blue's Flywheel as "so solid you won't even realize that it's by an all-female group". But historically, all-female a cappella groups have been less successful at achieving the diversity of sounds and arrangements than their coed or all-male counterparts.

On Flywheel, Out of the Blue puts those stereotypes to rest. This album is so precisely executed that we can drop the "all-female" qualifier: this is a great all-around a cappella album.

Out of the Blue's repertoire is all over the place: from the loungey soul of Corinne Bailey Rae (whose name is mis-spelled in the album credits) to the '90s R&B of Aaliyah to the disco-dance of Scissor Sisters to the modern alterna-rock of Radiohead. But Flywheel remarkably sounds more like a cohesive album than a mixtape.

And speaking of song choice, kudos to OOTB for traveling down the less-worn path. Some of the best songs here are tunes that many listeners might find obscure (Beth Waters's Blue & White), and even for more well-known artists, OOTB picks less-frequently covered tunes. Tori Amos's Cornflake Girl, which typically bombs a cappella (YouTube will back me up on that!) is carried out beautifully here; OOTB really focuses on the stretchy dynamics of each phrase to capture the sway of the original.

There is plenty of studio trickery here (such as the opening of Keeps Getting Better and the percussion throughout the album, which sounds tremendously like an actual drum kit). But in the case of Flywheel, these studio augmentations serve more to enhance OOTB's overall sound than to mask any deficiencies within the group; diovoce/VocalSource did a fantastic job with the production and recording of this album.

But most of the credit really should go to the ladies of OOTB themselves: 10 of the 13 songs on Flywheel were arranged by current members or alums of the group (the other three were arranged by members/alums of the Duke Pitchforks). Nancy Cheng did a great job with Imogen Heap's Just for Now, and the subtle panting/sighing in the background adds a beautifully subtle effect. Furthermore, the advantage of unusual song choices is that the group has truly selected songs that show off its members' solo voices, rather than trying to adapt its voices to songs that are popular in the moment. Monica Villar captures the somber fragility of Radiohead's Nude exquisitely, and Allie Thies takes on Last Name without sounding like a Carrie Underwood imitator (and, more importantly, without drowning out the interesting backing arrangement). I could go on and on, since there are so many other standout moments on this album (Bad Habit, Are You That Somebody?, and so on), but I'll let you discover those gems for yourself.