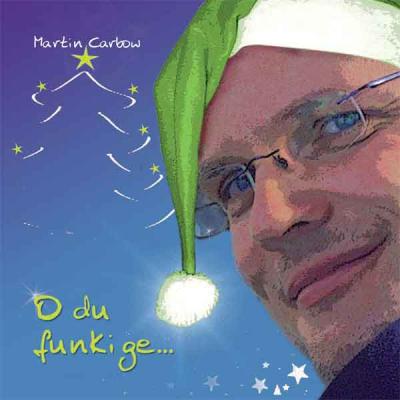 The candy cane sweetness of Christmas music is an acquired taste. But once the mood is struck (perhaps the day after Halloween in the United States ... ), all bets are off on coolness. Cheesiness — nay, shmaltz — may be freely utilized. Perhaps mixed with funky beats. But perhaps merely crooned. And, of course, for jazz arrangers, Christmas time is truly a license to lush. No chord has too much color, no arrangement too many tritone substitutions. No cadence is extended too long. Despite the singular nomenclature, Martin Carbow is a mixed ensemble in the style of Ward Swingle and Gene Puerling: dense chords, swinging beats. Their sound isn't new, but for Christmas it's just what Santa ordered.

And while this release is unmistakably focused on its lush vocals, it is by no means strictly a cappella. Bells, drums, harmonica and electric piano find their way into these arrangements. Yet these instrumental guest appearances are never more than window dressing to the vocal harmony. Yes, purists have their technical warning, but they'd be well advised to ignore it: this is actually a purist pleaser if ever there was one.

Why? Because, the voices themselves sound like voices! A cappella has been pursuing instrumental imitative realism — with varying degrees of success- for some 30 years. And whether effected with studio technology, gifted imitative skills or strange syllables, voices are frequently made to sound like something other than voices. It's a skill to be sure. But Martin Carbow's ensemble is a refreshing reminder of what the pursuit of phrasing, blend and arranging yields.

O du funkige does not rock. It is not dark and brooding. It does not create stunning new vocal textures. It is instead harmonically lush, rhythmically light and emotionally uplifting -the best of traditional vocal jazz. These ten Christmas classics swinging along in jazzy, blendy, pitch-perfection would actually make the perfect score to a new Christmas musical. (Think about it, Martin). Perhaps this isn't for everyone, but for fans of uplifting vocal jazz, O du funkige makes a worthy addition to the Christmas mix.

Martin Carbow once again presents me with something of a challenge in evaluating his work.

Last time, it was a two-disc set, only one of which was a cappella, and which sounded a whole lot like vocal tracks recorded with instrumental accompaniment and then lifted and presented as a cappella. Unlike my fellow RARBers at the time, other than the first-rate singing and "no auto-tune" blend, it really didn't work for me

This time around it's just one disc of mostly German Christmas carols, jazzily harmonized in a style reminiscent of The Real Group or Manhattan Transfer. Sounds pretty straightforward, no? OK, so never mind that my Orthodox Jewish upbringing leaves me with only basic knowledge of the Christmas classics popular here in the United States. This album has virtually no English in the liner notes and no credits or attributions for the individual songs, leaving me very little to work with in trying to gain a better understanding of what I am hearing.

What's more, there's a fair amount of percussion instruments sprinkled throughout his work. Track one is entirely bells (no voices). Track eight is a harmonica reprise of the prior song. About half of The Christmas Song (Chestnuts...) is accompanied by a 1980s circa Whitney Houston Rhodes syntheziser sound. So there's a fair amount that isn't a cappella at all. What to do, what to do, how to judge?

Well, stripping away all the trimmings, what O du funkige ("Oh how funky", a play on the Christmas carol, O du fröhliche or O how joyfully) has in spades are some very creatively reharmonized and experty sung treatments of traditional Christmas carols. Jazzy/funky chord substitutions abound. Stodgy old rhythms are stretched and syncopated, scatted and slurred to provide a refreshingly imaginative take on material, only some of which was familiar to me, but which is likely very familiar in particular to Mr. Carbow's target audience, which I imagine is primarily German.

Indeed, I wish Mr. Carbow had a better familiarity with and handle on how far the current contemporary a cappella world has progressed, as this could be a truly magnificent album if only he had availed himself of some more tools of the trade. He hints at the knowledge of more traditional arranging techniques, with multiple layers and a bass line interacting with a background block of voices in tracks like O du fröhliche and Alle Jahre wieder, but how much more awesome would the former have been if only he had proper vp to help him bring the funk. In general, the tendency toward unison harmonic singing and/or solos and word echoes — as polished and snazzy as it sounds — ultimately becomes a bit monotonous no matter how much Carbow and his gaggle of gifted singers try to keep the listener engaged with shifting feels and tempo changes.

While there are plenty who do it just as well, and quite a few who do it even more intricately and interestingly, I still might recommend this if you're a vocal jazz fan. Or perhaps if you're looking for some non-traditional background music for the company Christmas party. Otherwise, we can only hope for a follow-up album where Mr. Carbow takes the harmonic sophistication of this album, couples it with some more "all-year-round" material, and expands his arranging style with some additional layers and perhaps more non-instrumental vp. That would surely be most funky AND most joyful.

Martin Carbow and his band of merry musicmakers are back with a holiday offering that is sure to please even the most Dickensian of Scrooges among the a cappella community. O du funkige is fun, funky, and full of holiday spirit. The album is great as background music at your next holiday party — slightly eclectic and full of international flair.

O du funkige opens with a literal ringing of the sleigh bell alarm before a choral interlude calls on all to pay attention and perk up for some good cheer. The album continues with the African-inspired Vom Himmel hoch. The rhythmic chants and driving beats sets the pulse racing like waking up with expectant fervor on Christmas morning. The scat on Santa Claus Is Coming to Town grooves just enough to pique your interest without overshadowing the rest of the track

None of the music is extremely challenging for the performer or the listener. And sometimes that's all you can ask for in a holiday album. It just needs to sound good and put you in a good mood. O du funkige does that with aplomb. I'm more attracted and entranced by the non-English songs. The group just seems to have a lot more fun with these than with the carols and standards most of us are familiar with.

And what a group of singers Carbow has assembled for this recording. I recognize the names of two members of maybebop, and recent CASA blogger Dylan Bell (oh yeah, and former Cadence member) making appearances. All of the other members seem to be on top of their game as well.

The choral work is amazing. Carbow believes in dynamic range from his performers and arrangements and I, for one, thank him profusely for this. Any pyrotechnics are from the singers and not just the studio.

Some of the tracks do have instrumental accompaniment in parts or total. In fact, Oh Tannenbaum Reprise is all harmonica. All harmonica; no singing whatsoever. So if that's not your bag, skip the tracks, but don't skip the album.