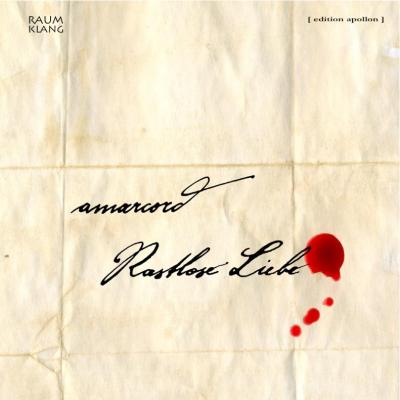 Rastlose Liebe positively glistens. amarcord's singers have outdone themselves with this latest album, a spectacular collection of German art songs written and arranged for a male choir.

Every note has a beginning, a middle, and an end, infusing all 27 tracks with a shimmering musicality that goes beyond amarcord's already accomplished technical skill. The group is in fine voice here, perfectly suited to this repertoire. Nineteenth-century German composers favored a style somewhere between Mozart and barbershop, encompassing elements of both. (If you're particularly interested in its development and evolution, read the extensive liner notes, which are fascinating to the point of overwhelming and helpfully offered in a suite of European languages.) This aesthetic leads to a lively mix of bouncy onomatopoeia, lush chords and smooth storytelling as the disc progresses.

The Mendelssohn is exquisite — Der Jäger Abschied grabs my attention every time and doesn't let go. Then again, it's hard pressed to outdo some of the Schumann. The opening track, Rastlose Liebe, launches the disc with attendant energy and Frühlingsglocken peals out with all the joy desired for a song of sweet spring. The spring song seems echoed in some of the Mendelssohn down the line, in Türkisches Schenkenlied's tavern anthem or the call of the gypsy song Zigeunerlied.

amarcord succeeds also with composers less well-known to me. Carl Steinacker's Die Hoffnung ("Hope"), carries an appropriate tune and melody for its subject matter: "Men speak and dream a lot of better days to come." I also enjoyed Heinrich August Marschner's Liebeslied eines Schneidergesellen. For all the music, I enjoyed hearing these singers linger over the words and chords and notes, just as the lengthy set list lingers over the Leipzig library of available compositions.

"Ah, Clara, what rapture it is writing for the voice,'' Robert Schumann wrote in 1840. The liner notes inform us of not only this enthusiasm, but also the relative paucity of performance opportunities for these choral songs. amarcord's triumph is to recreate the joy that prompted Schumann to declare "how beside myself and giddy I am" when they first emerged into existence. Thanks to that joyful spirit and an abundance of hard work and skill, Rastlose Liebe is a jewel of an album.

Rastlose Liebe means "Restless Love", but the title hardly describes the listener's experience. There's nothing restless about listening to one of the world's best vocal ensembles as they deliver a perfect concert of Romantic German lieder.

"Classical" is the term RARB readers would likely use to describe amarcord's style. Used generally, it's an expansive category with room enough for everything from madrigals to spirituals, 20th Century atonal works to film scores. Technically, "classical" refers only to a very particular musical period that actually predates the material on amarcord's latest release. Rastlose Liebe is a collection of the sweetly melodic, German Romantic works of Robert Schumann, Felix Mendelssohn Bartholdy, Heinrich Leberecht August Mühling, and Heinrich August Marschner. But regardless of the label, amarcord delivers nothing short of pure mastery.

amarcord's phrasing and dynamics are stunning, rich with emotion, evoking the stories and emotions behind the lieders' captivating melodies. amacord's intonation is excellent, and 100% natural — a rarity in today's recording environment. Their vowel match and diction are ideally aligned and their balance is like a beautiful tapestry in which the parts with exciting colors move briefly to the front and then fade back in, to be woven back in to the image as a whole. Rastlose Liebe is the product of countless hours of concentrated study and rehearsal, and it shows.

Few albums receive the moniker "must-have". Rastlose Liebe is one of them. This isn't merely for fans of the genre. This is for musicians of all kinds.

There is no reason why jazz, rock, or R&B music should be bereft of dynamics, phrasing, vowel matching, or overall precision, and yet so often they are. This is in part due to the tendency of a cappella groups to imitate popular, but flat performances that grab our attention only due to herculean efforts on the part of producers.

We can only do better by listening to better. Listen to amarcord. Become immersed in the music of subtlety. Rastlose Liebe belongs in the collection of every serious a cappella fan.

From the opening rousing notes of Robert Schumann's Rastlose Liebe to the concluding contemplative chord of Adolf Marschner's Ständchen, this album by Amarcord is a true masterpiece. In my two years and forty-plus albums reviewed for RARB, I've never given any album straight fives in the song ratings ... to break that trend now by giving straight fives to a 27-track album (!) should tell you something about this album's quality. In a word: wow.

The album is 74 minutes of near-perfect singing and amazing interpretations of classical songs of the romantic era composed by Schumann, Steinacker, Mendelssohn, Mühling, Zöllner, and Marschner. The songs, although in German, are very accessible: the shortest song is 1:13, the longest one only 4:26. The quality of the singing is truly amazing. The five group members blend effortlessly, with dynamics rising and falling together in unison. Without exception the individual voices are also fabulous, from the high soaring notes of the tenors to the solid foundation of the basses. Words cannot really do justice to the quality of the singing; you really need to hear this album yourself.

Some of my personal favorites are as follows. Frühlingsglocken: this was the runner up for the 2010 CARA for Best Classical Song. Among other things, the singers produce fun bell-like effects with their voices at strategic places throughout the song. Türkisches Schenkenlied: this is one that I myself sang in a choir about five years ago. I was impressed at how easy they make this "tavern song" sound, and how much expression they are able to put into their voices. Wanderlied: the beautiful high A's by the top tenor give me goose bumps. Liebeslied eines Schneidergesellen: again, it's the high tenor that gets me, singing a high B in what seems to be full voice. Overall an outstanding job by the tenor in bringing real passion to his solo.

All aspects of this album scream "professionalism". This includes not only the voices, but also the recording quality and the liner notes. About the notes: the album package features an eighty page (!) booklet. That includes about twenty pages in German about the composers and songs (translated into English and French, at about twenty pages each), and twenty pages for the lyrics to all the songs with both the German original and a side-by-side English translation.

To order this album, visit Qualiton (USA) or the group's website (Europe).