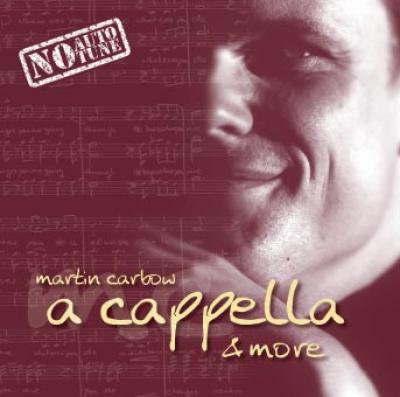 Martin Carbow has, through methods unknown, rounded up a posse of incredibly talented "friends" to create the accurately but unimaginatively titled two disc release, A Cappella & More . As you might imagine, disc one is a cappella, while disc two, is ... uh ... "more". In large part, disc two takes the disc one vocal tracks and, with some slight alterations, pastes them in wholesale as the vocal parts for fully instrumentalized arrangements. (Disc two also has some material previously unreleased on disc one.) The results are surprisingly good in most ways musical and surprising bad in most ways lyrical.

Lest readers think me unduly harsh, behold the clumsy wordsmithery, nay tripe, that you'll be fed on this two disc release:

"Lift Your Head Up High
If it's one of those days when you know you can't win seems like you're caught in a maze no matter where you begin There's no reason to fret
There's no use in a frown
Try to take a deep breath instead (yeah!) Don't let this life get you down
Come on and lift your head up high
Try to smile; I know that you can
You better lift your head up high so you can face the sun and then It'll shine down on you once again"

If nothing about these lyrics bothers you, you should run out and buy this release now. You are lactose-tolerant. All other aspects of MC and Friends are high grade: production, blend, arranging, rhythm, dynamics, intonation — even instrumental (cough! hack! holds up garlic to keep spirits away) performances. So what's to stop you? Nothing. Cheese-lover. That might not be fair of me. Judging from the accents of the singers, I would guess a good percentage of their listeners don't speak English as a first language and may therefore find these lyrics less objectionable.

For the rest of us, there are still a few standout tracks. You Make Me Feel Like Dancing isn't deep but has the comparative virtue of not preaching Crayola® philosophy. Journey To Brazil is a bit of a commercial, but fits so neatly in the loungey vocal jazz idiom that it's a simple pleasure to relax in this bubble bath of a track. Finally, the sugar-shockingly titled A Heart In New York (A Cappella) has some terrific twists in the lyrics, which artfully wrest the sycophantic tone of an ode and force it to stare directly at its subject matter. My favorite:

"New York, you got money on your mind
and my words won't make a dime worth of difference so here's to you, New York"

I graded nearly every track to be between 88 and 90 on a 100 point scale. That made for some really tough choices in the 5 point scale. So I'm giving fair warning that the tracks marks could easily have gone the other way.

There's no doubt that Martin Carbow and Friends can sing and play their butts off. I just had a hard time buying what they were selling. Skip the lyrics and you never know, you just might fall in love with these pros.

There are those who would suggest that Martin Carbow's A Cappella & More has no business being reviewed by RARB, and they are approximately half right. "A Cappella" and "More" are actually the titles of the first and second discs in this 2-disc set, but the first disc is not entirely a cappella (use of occasional percussion instruments) and the second disc is really not "more" of anything except instruments.

Taken on its own, the best I can say about the a cappella work on the first disc is that it is polished. The cover of the CD proudly proclaims "No Auto Tune" and if that is indeed true, then the singers featured on the album — a variety of different folks on different tracks — have a nice, professional sound, well-tuned, with a solid blend. Unfortunately, the other words that come to mind are overly simplistic, repetitive, unsophisticated, and generally boring.

Perhaps the clearest way to illustrate the style of a cappella featured on this album is as follows: imagine, if you will, arranging a basic, gospel-inspired melody (think perhaps Change in My Life without quite as catchy a melody), writing out the solo and the block background as one straight-ahead, harmonized, unison rhythm but leaving out the bass line and leaving out any significant VP. Presto — that's most of the first disc. Highway To Hell got a higher mark because it shows some degree of complexity, though it's about as vanilla an AC/DC cover as you're likely to hear. The rest of the disc is below the difficulty level of many high school groups these days, albeit performed with a professionalism that saves it from being thoroughly uninteresting. Yet it is not sufficiently interesting so as to rank it "average" in comparison with the modern a cappella world today.

Taken as an overall album, the first disc becomes a little more absurd when considered in light of the second disc, which features five instrumental versions of songs that were rendered a cappella on the first disc as well as a few more uninspired covers and a couple of unremarkable accompanied originals. The sheer basic-ness of the arrangements on the first disc becomes even more pronounced when compared to the instrumental versions; what you thought were a cappella "arrangements" on the first disc sound remarkably like the vocal tracks that are fully accompanied on the second disc! So now imagine a pop/rock group with a nice vocal ensemble sound — say, Chicago or even a Destiny's Child — releasing a CD where the first disc was essentially the vocal tracks from their hit songs with perhaps a modicum of percussion thrown in for good measure.

One other nugget: if you put the first disc in your CD player, it will show nine tracks and 70 minutes of music. Blissfully, this is not actually the case. The final track inexplicably (and inexcusably) is 40 minutes long with a 2-minute harmonica solo at the very, very end. Get it? Me neither, but the solo was actually one of my favorite parts of the album.

Who is Martin Carbow, by the way? He's the album's producer, arranger, co-engineer/mixer and composer of some of the tracks, and my guess is that he's pretty good (or even quite good) at some of those jobs in the non-a cappella world. But a cappella is just not his bag, and this album won't be yours.

"That's getting up in the morning music," — my friend Dan as I first played the album for him.

And that's exactly how I would describe the first part of this two disc album entitled "Martin Carbow A Capella & More". It opens with a very energetic and spirited Free Your Soul and then startling shifts into the slightly less angelic Highway To Hell. Yeah, Highway To Hell. After that blip, the rest of the first disc is more in line with the campfire singing of Carole King, Girl Scouts and Up With People than aligned with AC/DC and Led Zeppelin.

This is a good album. Well, the part that is actually a cappella. The accompanied work is actually fairly standard pop music, no harm in that at all, quite enjoyable in fact. But unless you are one of those eternally optimistic people, it's just going to piss you off. I can only be "up" for so long until it's tiring, and I get irritated. And I get bitchy when I get irritated. Mama needs a nap.

The "group" of singers is technically proficient (the roster seems to change with each track, so I'm not sure who's in the group or if it's even a group that's represented). Pronunciation is amazing at times considering that none of the performers are native English speakers, and the album is sung entirely in English. Intonation is spot on. The group paid careful attention to balanced voices. Since "no auto-tuning" is plastered on the front of the CD jacket, I have to assume the album is pure and give props to the performers for their abilities.

There are a few original tracks on the album, most notably Journey To Brazil, which in style and choral nature is reminiscent of The Beachfront Property (Who? Find them! FIND THEIR RECORDINGS AND DEVOUR!). They want to be jazzy like The Real Group, The Manhattan Transfer, and The Swingle Singers but can only dip their toes into the shallow end of the jazz pool.

The Up With People cheesy energy of the album really does bother me, but that doesn't make it a bad album, just one that I won't listen to all that often. So buy it if you need a pick-me-up in the morning (or whenever). If nothing else, pair it with The Princeton Singers' latest release, and you'll have a great soundtrack for your nighttime slumber and your morning coffee.

To order the CD, or to listen to samples of some tracks, visit Martin Carbow's website. You may also email martin@carbow.net.