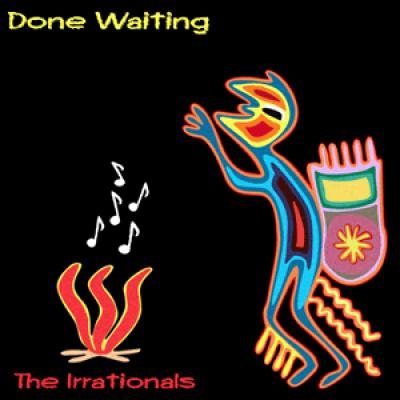 From the opening chords of The Irrationals' recording Done Waiting you can hear it — "it" being the influence of such stalwart artists as Street Sounds, Sweet Honey In The Rock, and SoVoSo. The quintet is deeply rooted in a R&B/soul/folk/gospel fusion of styles. The Irrationals are your parents' a cappella, caring much more about getting together in fellowship to perform the heart of a song instead of relying on the latest in a cappella innovations and recording techniques to make a dazzlingly produced album. And all with a touch of whimsy that can put a smile on your face when given a chance.

Their approach to making music works for the most part. The gritty earthiness can be very endearing, especially on the standout cover Love Me Still. But more about that song later. Done Waiting is a very representational album. You get the strong feeling that what you hear on each track is exactly how it sounds listening to the group on stage. The arrangements are fairly simple, allowing the soloist to do most of the work. Rhythm has a free-flowing response to the particular moment in the song. A sense of impromptu and spontaneity suffuses the recording, almost as if the group is making up the songs just for you in that particular moment. And all of this adds up to a lot of fun.

When this more organic recording technique doesn't work, the album can be a bit of a pain to listen to. It is crunchy in a not so good way. The tuning is an acquired taste as the members' voices don't so much blend as they complement each other. The production values are basic at best which affects some of their other musicality issues. Balance tends toward the female side. The trio of female voices (either on lead or background parts) are too far in front of the mix; you could forget completely that this is a co-ed quintet. The bass often doesn't provide a strong enough foundation because it can barely be heard. Chords come across as really heavy for lack of a better word, like the group members are trying too hard to make music.

What I do love is Sam Rogers' voice. He is an effortless tenor giving strong bottom support to the upper voices. His tonal quality and style of delivery is superb. He lays it all out there on both of his solos, the original he wrote called Done Waiting and the sublime duet with Gwen McElwee. McElwee is also a force to be reckoned with, blasting through the opening track Train in Vain with the bravura of a world-class performer. She's also a strong songwriter, penning and performing the other original on the disc Everything and Nothing.

I don't usually comment on the racial makeup of a performing group, but it seems most pertinent here. Made up of three African-American women and two white men, the group is a living representation of music building bridges. Rogers and McElwee's duet on Love Me Still is a prime example. The original Bruce Hornsby/Chaka Khan collaboration is as much about melding two genres of music to create better art as it is about relationships surviving all obstacles. That's a lesson to learn from and to live by.

Done Waiting is an average album from an average group with high potential. Future albums should focus on better recording techniques to offer a stronger professional representation of their sound.

The Irrationals, an adult quintet of "whimsical, soulful a cappella", will probably put a smile on your face with their album Done Waiting ... and that's about it. It's full of charming little ditties and earnest performances. Unfortunately, there isn't anything on this record that particularly stands out, and this, coupled with some problems with blend and intonation, renders this album largely another "face in the crowd".

The group consists of two men and three women, with the women providing the vast majority of solo performances. The leads are usually nice to listen to: they have a calm, relaxed aura that makes them hard not to like. The group has a similar understated charm, but sometimes this can affect the blend or balance of the singers. Often, the voices stick out a bit too much, even for a small five-person group. On several occasions, the backups are panned hard left and right, making the song very difficult to listen to as a "group sound" and not as a few individuals singing their voice part. This factor significantly detracted from my experience — with small groups, it is even more imperative to focus on blend and balance!

The group clearly didn't use too much in the way of after-effects, which I happen to like. The whole album sounds very natural, imperfections and all. Rhythmically, the group is dead-on. Pitch-wise, they're less than perfect. It's not enough of a problem to have you switch to another track, but it's noticeable. It has a feel similar to a pretty good live performance. Take that for what it's worth.

The song choices are odd. I actually didn't recognize many of them (Living on the Edge is not, to my disappointment, the Aerosmith version). One of them is about the symbolic nature of a microwave. Not that this is a bad thing, but a few more standards may have helped the album feel a bit more "familiar" and give the listener something relatable to latch onto.

The Irrationals have an endearing charm that some may love, but ultimately I feel they fail to break through the clutter. Done Waiting just doesn't have enough on it, in terms of content or performance. With so many other a cappella album choices out there, I say skip this one and look for some stronger quintets.

The Irrationals have a long history that precedes this album. This is their first album in their many years of existence, and judging by the title, it's been something the group has been trying to bring to life for a while now.

Done Waiting is a collection of covers and originals written by the group and its members. It simply doesn't live up to expectations. The production and quality control is years behind the curve simply doesn't stack up to most of what's out there. I found myself thinking, "These arrangements could sound really good with a little clean-up and some editing."

Unfortunately the album sounds as if it was tracked live on individual microphones, ruling out even minor pitch correction. The vp is overdubbed and, while occasionally interesting, is engineered to sound as if the percussionist is on the other side of a blanket. The vocals, both backing and lead, are often washy and a little woofy, and occasionally overload in unpleasant ways.

Done Waiting isn't without its high points. Train in Vain features a lip buzz bass that is excellently executed and sounds like it could be really impressive, but again the engineering takes away from it. Mighty Long Way is the other standout track, where all of the Irrationals are clearly in their element, singing soulful church music accompanied by snapping. Their blend and stylistic unity is better here than on any other track, and is a good starting point for the Irrationals' development.

A little more unification of musical ideas and a far better engineer would do the Irrationals wonders. They all have good voices, and can do interesting and often very impressive things with them. Stylistic unity is the biggest thing missing on their end. Combined with a little more production assistance, it could do them wonders.