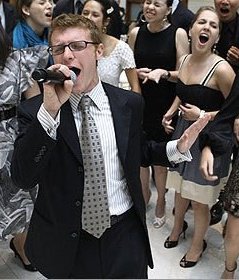 Alex Green is a graduate of Tufts University with a dual degree in Music and Archaeology, where he was a member of the Tufts Amalgamates for all 4 years of his college career, and served as Music Director for the 2009 calendar year. Post-graduation, Alex finished out his role as the Mates' album producer along with Alex Rodman and John Clark, finishing the Mates' Hands Off The Mannequin in January 2011. He is now a regular workshop leader and masterclinician at CASA festivals, and is one of the founders of and producers for the BOSton Sings [BOSS] A Cappella Festival.

After a stint singing with Overboard, he now lives in Somerville, MA with Eric Morrissey and Alex Koutzoukis, both formerly of the Bubs. The Alexes run Plaid Productions, an a cappella production company, and are the originators of the now-ubiquitous Collaborative Recording program which debuted unofficially at SMACC 2010 in Syracuse, NY. The program has now been adopted by almost all of CASA's wide range of regional and national a cappella festivals, and has produced tracks featuring the voices of Pentatonix, Naturally 7, The Boxettes, Duwende, and others. Plaid Productions could always use more work. Just saying.