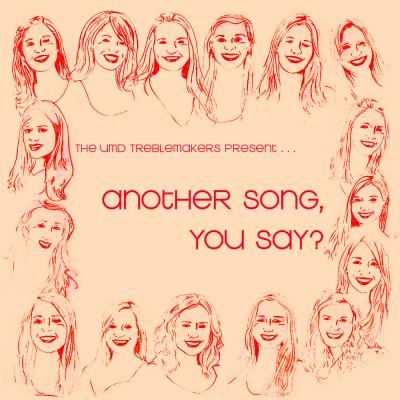 The Treblemakers are confident, tuneful and talented. That's the takeaway, after a couple of turns through Another Song, You Say? Yeah, sure. Another song — why not? I like what I've been hearing so far.

You Give Love a Bad Name sets the tone. It is a veritable post-'80s interpretation. Utterly without irony, utterly in style and yet — clearly not from the era. How can I tell? Because the soloist sounds like Belinda Carlisle trying to channel Pat Benatar. Neither of whom is exactly Jon Bon Jovi. Anyway, once you get your head around that it's pretty good, and the next song, originally performed by Taylor Swift, is actually supposed to be for people who can't remember the '80s. A pretty good first set builds into Live Your Life, the best track on the disc. The song has energy and also that extra edge that gives a pop song the kick it needs to thrive. It's preceded by Rock Your Soul, which grew on me with every listen.

I really like the soprano color in the Treblemakers' backgrounds. It's a great match of talent, arrangement and performance, and it made the disc for me. Many of the songs have this wonderful high accompaniment line, that moves around with the groove or offers an anchoring pattern. It's so precise, and without being thin or strident or unpleasant. For example, the chorus of For Once In My Life could have been dreadful. Instead it's charming, as is the vocal improv during the instrumental break. The rest of the song is solid, with a good beat, but the soprano line is what makes the track. Kudos to the treblemakers for singing and their recording crew for letting it sound so good.

This disc isn't going to be the breakthrough female a cappella album of the year. It's got a nice low end, good grooves and a solid sound, but I suspect it's still going to be tootly for folks who aren't inclined to like the basic sound. I think the Treblemakers get that, and aren't troubled by it. These singers know who they are and sound good being themselves.

The latest release from the UMD Treblemakers, Another Song, You Say?, ain't half bad; it's certainly a big improvement over the group's last release. Production is a big strength here, allowing the girls to craft a full yet nimble sound that's largely enjoyable. An added strength is that, at ten tracks, this album doesn't overstay its welcome. I wouldn't say that there's anything groundbreaking here, but I can really get behind an album that presents some fine material in a succinct and polished manner.

I really like Rock Your Soul. There's something about the balance and tone color of the voices that really grabbed me. The song has depth and passionate delivery. Cool stuff. Ditto for Love Story; a song I hate that's done pretty well here.

The Treblemakers have power in their bass lines. They're generally well arranged and all mixed well into the group's overall recorded sound. They add a ton of presence to songs that I suspect might have otherwise sounded half baked. Can the women replicate that sound live? I doubt it, but that shouldn't stop you from enjoying it here.

I can't shake the feeling that these gals owe a lot to their producers and engineers on this project. The raw singing is fine, and soloists are all above average, but there's something about this album that feels manufactured. Those deep bass lines that I like seem to be subbing for lack of full live arrangements; the fat percussion seems to be designed to add a feeling of broadness and ambiance to songs that weren't sung that way in studio.

Further evidence of this studio wizardry is inconsistency between tracks. There are two distinct levels of quality apparent. Most of the album is on the upper end of things, featuring the aforementioned production decisions that elevate this ensemble above average. The second, lower-quality level is exemplified by tracks such as For Once In My Life and Breathe, both of which sound meek and boring. Production credits aren't given for each track, so I can only speculate as to why those tracks come up noticeably short. Regardless, they're a tangible weak point, and they give me pause to question the rest of what I am hearing.

The good news is that many people probably won't ask these questions. They will listen and enjoy the many moments that are good on this album. The Treblemakers made some really good choices as far as who to work with and what material to present. My best advice for the future is to get even more creative arrangement-wise, and to sing with even more consistent energy. More innovation and less reliance on studio bells and whistles would make for a much more interesting album.

You know that one girl who's really pretty but wears a lot of makeup and you're not sure if she's just pretty because of the makeup or if she's actually pretty and just likes wearing makeup? No? Okay. Well, then, humor me here: I'm trying to draw some kind of parallel or something.

The all-female UMD Treblemakers provide some solid performances on their 10-track release, Another Song, You Say? But throughout my listens, I kept getting this feeling that underneath the shiny exterior is a group that may not be living up to the quality of the finished tracks.

What's that, now? That's not a valid assessment, you say? The album should only be judged based on the final product and not on speculation about what went into it? Well, I might normally be inclined to agree with this imaginary argument, but in this case, allow me to explain why I feel otherwise.

The tracks on Another Song, You Say? sound nice: they're polished, clean, and pretty well tuned. The rhythms loop, the deep female basses thump, and the effects shimmer. But they also provide little glimpses here and there about what may be underneath the surface. It may be a weak soloist. It may be a thin arrangement. It may be the inconsistent vibrato in the block. It may be the rampant wrong chords in You Give Love a Bad Name, Love Story, and That's What You Get. Whatever it is, these little nuances are jarring. They made me question the true musicality of the group, which detracted from my listening experience. Who exactly, I asked myself, am I listening to? The Treblemakers or Dio and the gang at Vocalsource?

I recognize that not everyone will feel this way when listening to a cappella albums; many fans don't let little clues like this penetrate their thought process. Many will listen to these tracks and think, "Wow! These sound badass!" And some of them do. Dream On, for example, is full of energy and has a rockin' soloist (Katie Friedgen). Say (All I Need) is also a nice ending choice, with Catherine Ho owning the ending on lead vocals. Love Story is also a pretty nice cover, despite the previously mentioned arranging errors.

In the end, I fell off the fence and landed on a "4" and not a "3" overall. There's enough here to feel satisfied with your a cappella listening experience, but it's a pretty low "4" for me. This album does very little to push the envelope and ultimately is nothing more than a collection of nice-sounding a cappella tunes.