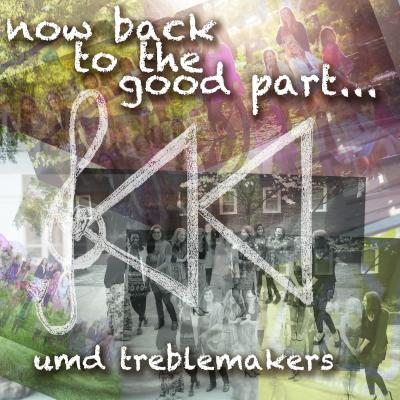 The Treblemakers from the University of Maryland is an all-female group, and the group's latest, Now Back to the Good Part..., definitely sounds like the work of female singers. Sweet-sounding, soprano-heavy arrangements are ubiquitous here, which is a good fit for the group's repertoire (the album skews heavily towards songs by female artists), and the track American Honey is a lovely performance that works really well with the group's aesthetic.

The problem with the group's overall sound, though, is that the album feels dated and a bit lackluster compared to the rest of contemporary a cappella. Songs here are pleasant enough, but there are some challenges: the syllables on Leave the Pieces ("zim-a-dim dim"), the restrained energy of Undo It (this song screams for more fire), and the awkward mash-up/medley on Goodbye/Chillin' all make for an average performance. Speaking of mash-ups, Apologize for a Bleeding Love Story  — which contains all the songs that its title suggests, and then some — is a jumbled mess, and even though all those songs basically work together, there's a distracting amount going on.

Other songs fare slightly better but still fall short of earth-shattering. Shark in the Water is polished, but listeners have heard this song before performed in the same way as the Treblemakers do here, and there's nothing to distinguish it from other all-female renditions of the same tune. The same could be said for the pleasant Hometown Glory; there are some great hints of dynamics here, and I would've liked to have heard these pushed even farther!

The real issue with Now Back to the Good Part..., though, is where the singers lack grit. They try on If You Could Only See, but the song just ends up sounding repetitive. The lack of low end is only part of the issue; it really sounds as though these singers are just going through the motions and not focusing their voices with passion or angst. It's the same problem that the Treblemakers face on all of Now Back to the Good Part...: these songs are pleasant and the singers are competent, but there's nothing to separate them from the works of other pleasant, competent groups.

The Treblemakers do a pretty good job with song credits. In addition to "OBP" credits, these ladies also mention most of the songwriters for the songs on this album. This is one thing that distinguishes them from other groups (thanks, ladies!), but I wish they had carried it across the finish line on every track. Carrie Underwood is the only songwriter credited for Undo It; her co-writers are summarized with "et al.", and that same abbreviation shows up on two other tracks here. Most of the other songs are credited fully, so this oversight is only a slight disappointment on otherwise above-average album credits.

As a reviewer, I am always hoping that sound production, careful arranging, and stellar solo voices are present on the albums I listen to. One element that surprises me when I hear it in a group's recording is style, and Now Back To The Good Part... has plenty of it. The ladies of the UMD Treblemakers have managed to develop a signature sound through their arranging and delivery, and have produced a solid album.

While this album may not include a vast amount of innovation, the Treblemakers know what their style is and utilize it well. Pop and rock tunes seem to be the group's niche, and very rhythmic backing parts fill out arrangements. Apologize for a Bleeding Love Story is one of the most impressive mash-ups I have heard in quite a while. I am still trying to decide which aspect amazes me more — the number of songs that were incorporated or the fact that all four soloists are really good. Either way, Kirsten Babin gets an A+ for arranging.

The Treblemakers also manage to have a few tricks up their sleeve. It's Raining Men shows the group's playful side, and unexpectedly comes across as more entertaining than cheesy. Stephanie Helwig delivers the solo in a way that really shows off a large range mixed with plenty of flair. And Hometown Glory is jam-packed with plenty of emotion that almost matches the tone of the original perfectly; the addition of this final song really contrasts everything else on the album and brings the entire project full circle.

While I really enjoy the production level of Now Back To The Good Part... it sometimes hides the low-end of the group's sound. On songs like Apologize for a Bleeding Love Story, and Goodbye/Chillin' the lower voices could stand to be more present to help carry the groove a little better. And also, with the exception of a few tracks, there is little complexity in the arrangements. This sometimes plays against the Treblemakers in that some songs sound alike in the grand scheme of things. But as I noted earlier, the group clearly has a style and I am glad that it is developed enough to hear.

The Treblemakers have something solid in Now Back To The Good Part... and definitely deserve a listen.

The tides are turning. There’s a change in the wind. No longer will poorly recorded, screechy albums be the standard for all-female a cappella. A well-known weakness of girl groups in the a cappella world is their lack of power on the low end. Now Back to the Good Part..., the latest release by the Treblemakers of the University of Maryland, is an example of how using technology to enhance albums has become the norm. Octave splits and strong vp bring life to an album that would otherwise be merely decent. This album screams of potential. The production value makes this an enjoyable listen throughout. However, the solos are hit and miss, and the arrangements are average.

Uncharted starts things off strong. The solo and bouncy syllables of this full arrangement makes it the best song on the album. On the other hand, the second song, Goodbye/Chillin', is disappointing.  The two songs aren’t handled well as a mash-up with very little cohesion between songs. Luckily, the soloists, especially the rap by Jenay McNeil, are quite good.

I respect these ladies for trying various syllables in their arrangements. Shark in the Water, American Honey, If You Could Only See and Leave the Pieces all feature this approach. Unfortunately, the effect is often more distracting than complementary. “Jin jo”s and “beer neer”s and “zimba”s keep jarring me out of the music. Though the performances are fantastic, I’d really like to have heard more creative musical moments. Add some interesting chords, ringing harmonies, rhythmic variations, or even use lyrics as backgrounds or play with genres. Keep me listening by being too cool to ignore. If You Could Only See, for example, though well-done, is just a straight cover.

Apologize for a Bleeding Love Story is a mixed bag. It has well-matched songs with smooth transitions; however, the backgrounds are boring, the solos are pretty but emotionless, and the kick drum is strangely distracting. More fun could have been had by twisting the songs together more or by telling a specific story in the process. I definitely love the title.

My favorite track on the album is It’s Raining Men. It’s not the strongest track, or as soulful as I’m used to, but the ladies had fun and it comes through. Undo It gives Uncharted a run for top track. It has a rockin’ energy throughout. Dani Dradger has an almost childlike voice, but her sassy edge is perfect for this song. While not my favorite song, if Adele sang Hometown Glory as well as Asya Hankin does, I might actually become a fan.

The future of all-female a cappella is exciting and the Treblemakers are on the right path. Talented musicians and great production make Now Back to the Good Part... absolutely worth the buy. A more personal and interesting approach to the arrangements could make the group's next album even better. I want to thank the ladies for crediting the original composers in the liners instead of just the performers. Each one of you is a gentleman and a scholar!

To order this album or purchase any of these arrangements please send an email inquiry to treblemakers@gmail.com