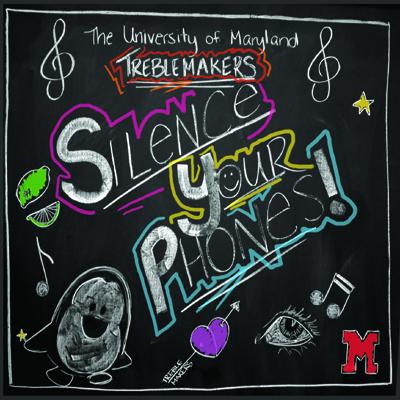 I love the bite of the Treblemakers, the aggression that comes through on Hollywood and Breathe In. It's a treat to hear a group of singers go all-out. It's an extra treat to hear college women who aren't overly concerned with sounding nice or cute or sweet. There's plenty of that to go around — it's the stuff that's different that stands out. And for the casual listener, the abrasive songs on this album are the only ones worth more than one listen.

Like the chalkboard cover art and girlish handwriting, much of Silence Your Phones seems full of youth, which is to say energetic and sincere and on the naive side. It's charming. It's also pretty out of tune. This kills the sweet songs, despite decent solo work and promising grooves. Baby Girl, the catchy Sugarland song about playing the bar scene and waiting to hit it big, is sadly too pitchy to sit through, and Starts With Goodbye needs an extra month of rehearsals before it's ready to leave the house. Likewise, Like a Prayer has a slow, engaging — and original — pulse that is, nonetheless, absolutely sunk by tuning problems.

Medleys are de rigeur for these sorts of do-it-yourself albums, and they're out here in force. The Madonna cover makes the predictable detour through Vogue, while What Goes Around includes a barrage of Timberlake and top 40 hiphop. Like most of Silence Your Phones, these songs have plenty of charisma and probably sound pretty good in an arch sing. That won't cut it on a recording.

What works is the hard stuff, the punk numbers. That's where sheer beauty trumps skill and obviates polish. When a sufficiently attractive young person looks you in the eye and snarls insouciantly, it trumps just about everything else. On this album, Catherine Ho seems to have the best ability to get the rest of the group in sync. She sings well, in her turn out front on I Won't. On Hollywood, she gets the Treblemakers to a higher level of energy than anywhere else on the album. The only two other songs that get close are the barrage that is Breathe In and the minimalist Such Great Heights. That song benefits from its less is less arrangement, as well as the aggressive autotune that hits like a bucket of cold water thrown hard on a hot day.

The Treblemakers sound best when they throw hard, secure in themselves and their spirit. We should all be so fabulous. In the meantime, we can't write them off.

At its best the latest album from the University of Maryland Treblemakers, Silence Your Phones, is a pretty average recording. When everything is in tune, the soloist is on, and the percussion is in the pocket, the sound is exactly what you might expect to hear from a decent female collegiate group. About a quarter of this album falls into that category. When things go south, however, the results are pretty disastrous. Several missteps and messy moments indicate that the Treblemakers have a lot of work to do if they want to make impressive albums.

Above all else, the Treblemakers are hindered by the quality of their arrangements. Almost every song sounds thin due to boring and repetitive arranging techniques. There is almost no interesting layering to hear. Most of the arrangements rely on big homophonic blocks to get the job done. Several songs introduce background parts early on that continue uninterrupted for nearly the entire tune, changing only harmonically to accommodate the chorus or bridge. This sort of easy, static arranging is the mark of an amateur ensemble. The Treblemakers need to challenge themselves to explore more creative arrangements, even if that means seeking help from outside the group.

Another major issue these girls need to watch out for is the vocal percussionist's groove with the rest of the group. The individual drum sounds on this album aren't too bad, but there are numerous moments where the percussion track doesn't quite sync up with the singers. This is something that can and should be corrected in the studio. If the raw takes aren't quite in time then they should be re-tracked or sequenced to match the groove of the song. Failing to do so contributes a lot to the amateur aesthetic of this album.

Speaking of the studio, the Treblemakers should really consider working with a producer or engineer who is more familiar with how to mix contemporary a cappella music. Some of the aforementioned arranging issues can also be blamed on the fact that much of what is present to add interest in each arrangement is mixed into oblivion, hidden behind inappropriate distortion and poor EQ choices.

What saves this album from being bottom of the barrel is the fact that the singing is actually decent. Backgrounds are pitchy, but acceptable. Many soloists are actually pretty good, which indicates that the Treblemakers have some talent in their ranks. Unfortunately they have a long way to go in order to properly showcase that talent. Much better arranging coupled with better production may give this group the opportunity to shine. Until then, I can't really recommend their work.

When I first popped Silence Your Phones into my computer, something didn't sound right. "Oh," I thought, "I must have accidentally turned the system's bass settings down and the treble all the way up." So I checked, but to my surprise, the settings hadn't been altered at all!

Okay, that didn't really happen. But the absence of thumping octavized basslines in an all-female recording was a bit jarring. I'd forgotten that women actually have a limit to their lower vocal registers, and the Treblemakers of the University of Maryland politely reminded me of this fact. They also reminded me that vocal percussion sounds vocal, chords don't always lock, and a cappella music notes actually have "words" attached to them.

Wait! Stop! Don't rush to the RARB forum and complain about my bias towards "natural" sounding recordings. I made no evaluation of this record's quality. I can just affirm that this type of sound was refreshing.

As it turns out, I find the actual material on this album nothing greater than mediocre. Remember when I said chords don't always lock in a cappella groups? Yeah, well, you'll be reminded of this reality quite a bit if you listen to Silence Your Phones. Tuning on this record is below average, but what's curious is that my ear also detects artifacts of autotune here and there. Sounds like some phrases were tuned to the core, while others were left alone. This is a bad mix. The perfectly tuned notes end up accentuating the non-tuned notes, because the singers are suddenly not tuning to each other. Some are tuning to absolute pitches. Others aren't. Sometimes this is really destructive to the track, but other times it merely sounds like you're listening to a live group.

In general, the songs on this album feel a lot slower than they should. Such Great Heights is a disappointment to me. The intro is so well executed, but it falls apart because the arrangement digresses to held block chords and one or two descant parts. All this is supported by a laid-back percussion track. This is a fatal error on a song that needs to be rhythmically driven to work well. Other songs would sound pretty nice if you weren't falling asleep to them (see Breathe In, and Like a Prayer).

By contrast, the songs on this album that are the most engaging are the ones that display energy, attitude, or enthusiasm. Baby Girl is fun because it's high-spirited, groovy, and well sung. I Won't has a great attitude, as does Monster, and these are the songs that you'll come back to. These girls need to find their edge and stop sounding so pretty. If this album were more in-your-face, I think I might be more engaged.

This is one of those albums that I wish I could assign a better score. Frankly, most of the soloists are pretty strong. And the percussion on this album is also decent, and in some cases, quite good, considering it seems to be unsampled. I really like these girls; they seem to have great fun singing, and that can go a long way in a performance. But too much of this record sounds thin or unfinished (thanks to overly simple arrangements). And of course, the tuning is an issue. I'll be the first to acknowledge the group's earnest, sincere sounding production choices and its merits, but in the end, the material simply doesn't compete with the overwhelmingly large amount of competition out there.