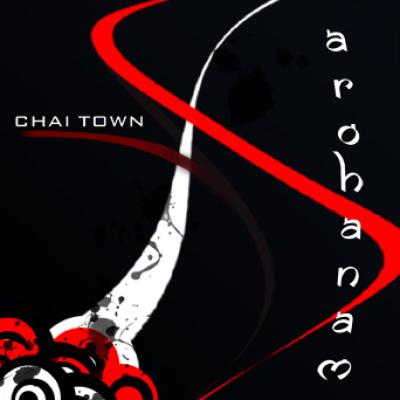 Arohanam, released by Chai Town (out of Illinois), kicks off with a Middle Eastern-sounding drone that's both an entrancing and mysterious opening to the album. It definitely sets the mood for Arohanam, and Teri Deewani continues the feeling with a solo that twists, turns, and builds to the entrance of the backing voices that brings back a similar drone from the opening track.

Chai Town is certainly musical and understands the balance between soloists and the group as it relates to their style of singing and music.

Pachchai Nirame introduces a bass groove with some simple vocal percussion, changing the mood of the music slightly. This song really showcases the group's ability to ring open 5th chords in the block, adding to the mystery of their sound.

Chai Town continues on this trend for most of the album, but does provide a few surprises as they incorporate some American top-40 tunes into their sound (Because Of You/Kya Mujhe Pyaar He and Sexyback/Jumma Chumma De De), which will draw in listeners not familiar with this genre. Sexyback in particular is a track that succeeds and proves Chai Town could do more with the incorporation of US top-40 tunes to make the group more accessible to a mass audience.

If you enjoy groups like Penn Masala, then I think you will enjoy and appreciate what Chai Town has brought to the table here on Arohanam.

Chai Town is an all-male a cappella group from the University of Illinois Urbana/Champaign. As can likely be surmised from perusing the track list, they sing partially in English and partially in Hindi. Regardless of language, the singing style (harmonies, soloists, etc.) is very Indian.

In many ways that last fact makes this one of the hardest reviews I've ever had to write for RARB. To wit: I very much dislike this style of music. I readily admit that my negative reaction is due to my own cultural conditioning rather than any inherent flaws in the music. And I've tried to be unbiased in my review (scores and comments). Nevertheless, I decided I should put that prejudice out there so you can take this review with a grain of salt.

This may be an artifact of the singing style, but the soloists all seem raspy to me. None of them are especially impressive. In one case (Teri Deewani), the soloist has some intonation problems which detract from the rest of the music.

Speaking of the music, with few exceptions, I feel the songs on the album are all kind of "blah". There's not much dynamic or stylistic contrast. That causes all the tracks to blur together and sound the same; in many cases it was hard for me to tell where one song ended and the next began. (If I understood the Hindi, this might have been less of an issue.)

One thing that is fairly clever throughout the album is mixing English and Hindi words (and tunes) within a given track. Sexyback/Jumma Chumma De De is the best example of this, and is a very impressive bit of arranging. The track begins with a contemporary a cappella arrangement of Justin Timberlake's Sexyback. After thirty-forty seconds of this, an Indian tune comes in (Jumma Chumma De De), without changing the bass/background vocals hardly at all. The two tunes switch back and forth, then, two minutes in, a soloist goes off on an Indian-style wordless wail, while others simultaneous switch to a pattern based on Right Said Fred's I'm Too Sexy (in English). It works very well, with a seamless flow to the whole piece. After another thirty seconds, it's back to Jumma Chumma De De for the rest of the song.

In the end, the album just didn't speak to me and I likely won't be listening to any of the tracks again, with the possible exception of Sexyback. But, as the saying goes, your mileage may vary. If you like Indian music, by all means check this album out.

There are so many a cappella groups out there with poorly-executed identities — groups in general, but mostly collegiate — that it is welcome and refreshing to come across a group with an obvious, well-defined goal. Chai Town, as it says on its web site, specializes "in mixing Indian and American songs together". There are other groups on other campuses that have the same (or a similar) mission, but that makes Chai Town's consistency no less commendable. I'm sure you all know what I'm talking about: the Hebrew group that performs random US Top 40 songs, or the contemporary pop/rock group that throws an incongruous Broadway song into its repertoire. Those groups may consider such unusual song choices as falling under the "songs we like to sing" umbrella, but an audience usually just hears that hodgepodge as jumbled, inconsistent repertoire.

Rather than condemning other groups, though, I should be praising Chai Town: they find ways of blending contemporary pop American songs into Indian music to create charming and fluid mash-ups. Note: these are one step more complex than a simple medley. Almost all of them work; I found Sexyback/Jumma Chumma De De a little repetitive, but the transition into Sexyback from Nachangeh Sari Raath/Tempted To Touch is so smooth and seamless that the two could easily have been combined into one giant mash-up medley (perhaps shortening the Sexyback portion at the same time).

Chai Town has commendable arrangements. Arjun Venkataswamy and Ravi Jain have their names next to the lion's share of the tracks on Arohanam, and that consistency makes for a cohesive album.

Musically, these guys are definitely better than average. There are a few shaky moments (especially on Arohanam) and a few weird arrangement choices (there's something on Maaeri that sounds like bubbling water; it's a cool effect, but it's also distracting). But on many of their Indian pieces, they create a haunting, chilling atmosphere; the opening of Pachchai Nirame is a highlight, although I did wish for more swelling dynamics to convey a story within the song (since many listeners — myself included — don't know what the song is about!). Still, that song and Mohabbatein Medley are definitely standout tracks on the album.

All in all, Arohanam isn't perfect, but it is cohesive: the group delivers exactly what it promises. That, combined with some clever mash-ups of American and Indian songs, makes for an enjoyable listen.