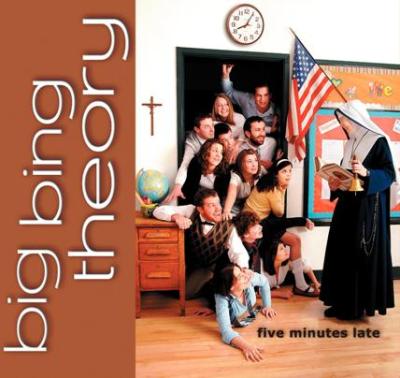 The Big Bing Theory has come of age without growing old. Five Minutes Late is energetic, charming and easy on the ears. The Spokane gang have learned how to tune and how to record, hitting the mark for a college album that prompts smiles instead of winces. At the same time, the group retains its youthful sound and ever-cheerful vibe.

Wannabe opens this disc with great energy, hey-hey-hey bouncy and utterly irony free. There isn't much funk either, which pretty much sets the tone for the rest of the album. BBT is by turns sweet and goofy, never sultry or angry. I'd say they were throwbacks, except that when I sang a cappella Annie Lennox and Ace of Base in the early 1990s we had angst and attitude in spades.

The sweet moments are the nicest, which should be no surprise. Fever features a lovely arrangement by Nicole Lewis, and the whole group sounds terrific for the minute and ten seconds it takes to sing the Middle Earth theme. No lyrics, no mistakes, just a technically and artistically pleasing interlude. Worth a listen for all, not just the yearbook crowd.

Where is the Love charms me in a post-Beastie Boys sort of way. At the other end of the artistic spectrum, the live and classical setting of Be Thou My Vision has some beautiful moments that more than justifies its presence on the disc. I also enjoy Amy Jon Ryan's solo intro to Shelter Your Name, leading into a sweet and affecting performance by the group as a whole.

Yearbook types will be the only audience for the three hidden tracks, which are are all over the map in fine collegiate tradition. VP Skit is too long and not quite funny enough, but I'm willing to give it a pass. The bagpipe bit is just terrible — and group, if you're listening, none of those are the right key. But at least the disc ends with the adorably silly Squirrel Song, which is not cool, not a cappella, and not without its charms.

Charming is a common theme for The Big Bing Theory, right up there with sweet and perky. With Five Minutes Late, this group can add proficient to that list of character traits.

The Big Bing Theory is a Gonzaga University co-ed group that has been around since 1998. Their basketball team has often surprised some great teams in the NCAA tourney. Can The Big Bing Theory do the same in the a cappella world? Not yet, but they have the potential to do some very nice things on their next album.

In a nutshell, The Big Bing Theory has put together a below-average collegiate album in many respects: very average arranging, production that does nothing to aid their sound, and musicality that is hidden in the contemporary songs they've chosen.

Are there good singers on this recording? Yes. Can you tell most of the time? No. I have a sneaking suspicion that they wanted to create a contemporary recording, but didn't quite have the budget to do so. Clue #1: Bill Hare is credited as contributing the mixing and mastering. I'm sure he did the best with what he was given, but the result is a recording that is mostly muffled to the point that you can't hear the inner voices (much less the soloists), and it comes out as a very frustrating recording to listen to. It sounds like a recording still in its early stages and not ready for mass consumption at all.

That said, The Big Bing Theory doesn't do much to help overcome this obstacle on the contemporary tracks. Tempos are locked in at speeds too slow to recreate the energy of the original track (Where is the Love, and Walkin' on Broken Glass). I've found that a cappella renditions of songs should (usually) be five-ten ticks quicker on the metronome to capture natural energy when a sound consists of voices only.

Soloists are lukewarm. Soloists aren't everything, but if you don't have someone who really knocks the song out of the park, drop the song. It sounds like the soloist choices were an afterthought on Five Minutes Late. One thing to try when thinking about repertoire is to compile a list of songs you're interested in doing and audition soloists before learning (or best case scenario, before spending time arranging) the songs. That way you'll know you have one major aspect of the track locked down as being great.

There are some rays of hope on this recording. The Big Bing Theory sounds very nice on the less contemporary songs (Hold Your Hand, Be Thou My Vision, and Shelter Your Name). Hold Your Hand is a nice flowing arrangement (Katrina A. Bishop) and the first time on the album you hear the group's natural abilities come through the recording. I hear dynamics, a musical line, and can actually hear the inner voices. When listening to these tracks, you can hear some good singers in this group. More of this please!

The bottom line is that The Big Bing Theory is way behind the curve on arranging, contemporary recording techniques, and solo choice to have Five Minutes Late come across as anything better than below average. The few redeeming tracks aren't enough to lift the disc up, but can be something to build upon in the future. Oh, and leave the hidden tracks off the next album.

The first thing I heard on this album was not what I expected — it was not a note. It was actually the footsteps of group members shuffling into the studio. This is never a very good first impression. I prepared myself for an unprofessional and mediocre album. In some cases, I was pleasantly surprised, but for the most part my first impression was spot on.

Full of basic and predictable arrangements, lackluster soloists, and so-so production, The Big Bing Theory's latest release, Five Minutes Late, doesn't positively impress. While all of those are factors, the number one issue at hand is production. This album is a prime example of why the phrase "fix it in the mix" should be banned from all of our vocabularies. Most groups underestimate the importance of the actual recording process, but the engineer on the other side of the glass during recording sessions can make or break an album. Five Minutes Late could have (and would have) been miles ahead of where it is now if they were able to get it right in the studio.

While there isn't any one track on the album that I consider awesome, there are a few that give me hope that this group has potential. Their rendition of Peggy Lee's Fever is spot on. The arrangement and solo, both done by Nicole Lewis, shows that BBT knows their stuff. My only qualm with this track is the backing vocals. The basses are super aggressive and percussive with their syllables, which takes away from the steamy sultriness of the song. Fever is not the only semi-successful track on the album. There are a few others scattered in the mix, Middle Earth and Dare you to Move being among my favorites.

On the track listing, the last song is Stay, but there are actually three more tracks waiting to be heard and they all take more away from the album than they give. BBT would have benefited from editing down the album to perhaps ten or eleven tracks total. Just because you have sixteen songs in your repertoire doesn't mean that all of them have to be on your album. What's better: a less-than-average sixteen-track album or an average ten-track album?