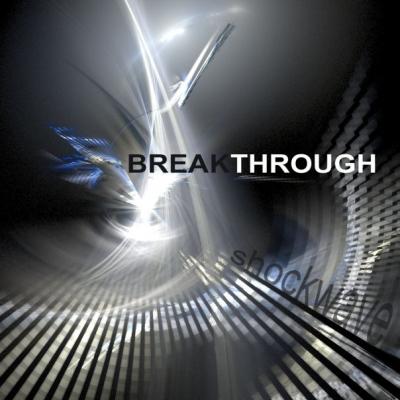 Breakthrough opens with a bang: a gritty, powerful punch of music that lets you know these women mean business. This is the most aggressive all-female collegiate album I've ever heard, and that in and of itself is a cool accomplishment. Think of a more polished OTB, or a less R&B influenced Chordials, and you'll have an idea of what the ladies of Shockwave are after. It's definitely an accomplishment.

The key to Shockwave's approach (as it is with all groups that chase this sound) is the energy. Crawling in the Dark never lets up, and it flows perfectly into Bleed American, Face Down. Everyone sounds 100% committed all the time, from soloists, to backs, to VP. The biggest letdown is Mercy (the arrangement is a little thin, and the groove never quite locks), but I have to give props to soloist Daphne Clark for doing her damnedest to keep the energy rolling. Personally I would have preferred a smoother delivery, but her performance was anything buy wimpy, and I respect that.

The track list here is excellent. I can't award many points for song originality, but I will award major points for two excellent mashups (tracks 2 and 6), both executed so well that I barely registered the change of song. Really, Just Dance Into the Groove works on so many levels (thematically, harmonically, lyrically), it's everything a mashup should be.

At 10 tracks Breakthrough doesn't overstay its welcome, and moves along at a quick clip (only 2 of 10 are slow, a very good ratio). This stuff might matter less in the age of digital downloads, but I still care, dammit!

So why no straight 5s? Soloists miss the mark occasionally, sometimes going a little "karaoke bar" with their delivery in an effort to capture energy. Arrangements are really good, but lack some of the creativity exhibited by the best, relying instead on the good old "jen joh" plus distortion pad formula.

At the end of the day, those are small issues. Just because this album isn't perfect doesn't mean it's not great. With a clear sound in mind, Breakthrough is Shockwave's claim to fame as the gutsiest girls on the recorded a cappella scene. Prepare to be blown away.

First things first: Breakthrough has just about the coolest cover art that I think I've ever seen on an a cappella album. Love it!

Shockwave is an all-female a cappella group from Rutgers University, with about 14 members (judging from the photo in the liner notes). Most of their songs lie closest to the "Rock" segment of the a cappella spectrum. Some of their songs come across a bit too shouty for my taste, but fans of harder rock might like them. The album is a solid but not spectacular effort.

The album begins with two loud numbers, Crawling in the Dark and Bleed American/Face Down. They are both nice arrangements, with lots going on to keep the ear interested: passionate soloists, driving vocal percussion, an octavized bass, and various other background parts. Next comes Mercy, where unfortunately the shoutiness of the soloist really doesn't work for me. I Can't Make You Love Me slows the album down a bit ... but perhaps too much. It's a little sleepy for me, and sounds a little out of place on the album. Soloist Jamie Bunce does have a pretty voice, though. The first half of the album is rounded off with the album's weakest track, Lying is the Most Fun a Girl Can Have Without Taking Her Clothes Off. Two soloists trade the melody back and forth, which works OK, but they also have several unison sections which really don't work well. They sound like they are both slightly out of tune with each other and with the background chords, and don't hit the rhythms in perfect synchronization.

The second half of the album begins with covers of well-known songs by Madonna (apb Lady Gaga), Pat Benatar, and Destiny's Child. Shockwave continues the pattern set by the first two songs, with lots of energy, driving beats, and almost shouting soloists. The first two of this triplet aren't anything special, but Survivor is one of the strongest songs on the album, and one that I would add to my "work out play list", if I had such a thing. The next song, Almost Lover, is another slow one, which like I Can't Make You Love Me leaves me feeling a little too sleepy. The slowness also unfortunately emphasizes the flaws in the soloist's voice, which simply doesn't have the "I could listen to her all day" quality that the best collegiate (and pro) soloists possess. The final track, Going Under, had some nice moments with electric guitars, but left me feeling a little unfulfilled for some reason.

In summary, there weren't any "gotta have it" performances on this album. However, fans of the group, and of rock-style a cappella in general, will likely find it enjoyable.

Rutgers Shockwave has selected an ambitious songlist here: most of the songs on Breakthrough are energetic pop/rock songs, and it can be difficult for a group to convey that energy on a recording.

Shockwave is, for the most part, successful in capturing the energy and power of these songs. Survivor just oozes with sass and attitude: it's a song that might not initially sound like it would lend itself to a cappella, but Candice Leigh Helfand has concocted a wonderfully rich, full arrangement here. There's a ton going on behind the soloists here, but the listener is aware only of the fullness, not of the individual details. Similarly, the Lady Gaga / Madonna mash-up Just Dance Into the Groove works really well; arranger Danielle Belsky has meshed these songs together seamlessly.

Unfortunately, though, while the backing voices almost always nail these arrangements in pitch, tone, blend, and energy, the soloists are less successful. Crawling in the Dark is an outstanding arrangement (and flawlessly executed), but the song is pitched too low for the soloist: we're used to Hoobastank just wailing in the choruses, and the song doesn't sit in the right part of her range for her to achieve the same effect. Similarly, the Face Down portion of Bleed American/Face Down isn't in the right key for the soloist fully to capture the urgency of the original. (As a side note: this medley doesn't really work, as there's no good connection or transition between the two songs.) Something about Heartbreaker has a muddled, underwater sound, which doesn't fit with the crispness of the rest of the album.

One of Breakthrough's biggest issues, though, is cohesion. These ladies sound absolutely angelic on I Can't Make You Love Me; they bring a fresh sound to a song that has been covered a billion times before. The only problem with the song is that it just doesn't fit with the rest of the album. Even following Duffy's Mercy (which is a slower tune itself), the song just brings the album's good momentum to a screeching halt. Almost Lover has the same effect later in the album.

There's a lot that Shockwave does well, and the group is significantly stronger than most other groups out there (and, OK, I'll say it: these ladies are also significantly stronger than most other all-female groups out there). But in order for these singers to make the leap from a solid album to a phenomenal album, they'll need to start thinking about their output as an album and not just a collection of really good songs.

Email rushockwave@gmail.com or visit digstation.com and order a copy today!