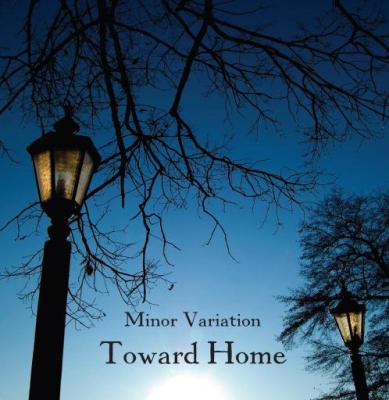 Toward Home is an album of great poise and grace that uses faith as the main theme to explore Minor Variation's bountiful musical ability. Based on that sentence alone, you can probably extrapolate whether or not this album is for you. Minor Variation's belief, musicality, and creative bent are clear. The question is, are they the group for you?

Do you enjoy a pure, unadulterated a cappella sound? If so, maybe this album is for you. The ladies of Minor Variation have a beautiful, simple tone with arrangements that play well to their strengths. Nothing too fancy, but each chart features textures that allow the warmth of the group's sound to come through. Percussion is well-sequenced, yet distinctly vocal. There are even some neat extra-musical moments like the voice/body percussion rain shower intro of Caelum Infinitum to impress the more experienced aca-heads.

Do you like rock or radio pop music? If so, this album is probably not for you. Graceful though it may be, and while the general level of energy is appropriate for the aesthetic of the album, Minor Variation never kicks it up much beyond the breeziness of Lovers in Japan, or the not-quite-arena pop of Unafraid (subdued a bit from the Joy Williams original). Basically, if you're waiting for intensity, don't hold your breath.

Are you on board with a distinctly Christian message? If not, you might still enjoy this album. Though the group thanks Jesus Christ very specifically in their liner notes, the message of the album is just that: one of thanks. Using faith as the anchor here contributes to the introspective nature of the group's music, but it never comes across as heavy-handed or exclusive. I appreciate the positivity and inherent joy of Minor Variation's belief as expressed in song.

I have quite a bit of respect for Toward Home as an album, yet as a reviewer I recognize that it may not be for everyone. Minor Variation presents a strong identity and tells a clear story with their music, which is extremely commendable. If you're looking for pure, pretty, graceful singing, I can recommend few collegiate albums better than this. If you're turned off by the set list, consider giving it a shot anyway. These ladies might just surprise you.

I wasn't familiar with Minor Variation prior to receiving this album to review, but after listening to Toward Home several times over the last week or two I have to say they will be on my radar screen in the future. They are a large (about 16 person) all-female group from Wake Forest University with a religious bent. The religious nature is quite evident from the liner notes, where for example they give "thanks and praise to our Lord, Jesus Christ" and mention that "proceeds from this purchase support our ministry". It comes across much more subtly in the song selection, though, where only a few of their choices seem overtly religious ... though after thinking about it, songs such as Sarah McLachlan's Angel make perfect sense.

Their subtlety extends from the song choices to permeate the music on the album itself. In many ways Minor Variation's subdued sound reminds me of the soft-rock style of Sixpence None the Richer. They have a very natural a cappella style, with minimal vocal percussion, no electric guitar effects, hardly any octavization of the bass line, and so forth. In contrast to most of the other a cappella albums I've reviewed recently, I couldn't detect any auto-tuning at all ... and they didn't need any! There could be some that I don't detect, of course, but the hand of producer Derek West is far from the forefront. I quite like this: he lets the vocals take center stage.

And the vocals deserve to be front & center! There are some very, very lovely soloists on this album. I thought about listing them specifically, but there are just too many. I normally listen to albums on my computer as I work on other things, but during my first few times through the album there were several moments where I stopped what I was doing so that I could simply listen to the sound of the soloists' voices. I take my hat off to you, ladies.

Despite all of my praise, the album is not perfect. The weakest moments are in the slowest two songs: Angel and Holy, Holy, Holy. For a group whose style already tends towards the light and airy, these songs seem to drift a little too purposelessly.

But that's really a minor quibble: if you like natural-sounding female a cappella and don't mind a slightly religious take, this album is for you.

The women in Minor Variation of Wake Forest should be proud of their effort on Toward Home, a collection of Christian songs laden with genuine spirituality and heartfelt performances. It's always a little extra special when a group is able to combine solid musicality with a deeper sense of purpose. In many ways, Minor Variation is the all-female equivalent of their school's Chi Rho, in that they share the same polished and thoughtful sound. These gals not only want to sing about their religion, they want to sing about it well.

I'm not a religious person, but that didn't stop me from enjoying what Minor Variation has to offer on Toward Home. The group blends extremely well — you almost never hear a voice sticking out where it shouldn't or a conflict of tone. Most of the tracks are smooth as butter, from the beautifully sung Angel, to the fun, upbeat Breathe Your Name. The songs all sound very pleasant, although some of the material is a bit more engaging than others. It's not the most energetic or exciting album you'll ever hear, but it's still a great listen end to end with no duds to be found.

The group's arrangements are pretty strong throughout the record, and as an added bonus, a cool little rain effect is employed through the use of finger snapping at the outset of the expertly executed Caelum Infinitum. Soloists are consistently solid, although no one blew my mind. But that's okay — this group functions as a strong cohesive unit where no one person carries the weight.

Call me old-fashioned, but I did take issue with the octavized bass used throughout the album. I'm never a fan of this tactic for all-female groups, because it makes the final product sound like a co-ed group without a tenor section. But it's especially disappointing on an album like this, where everything else sounds so genuine. If you're a group that's going to use fingers to simulate a rainstorm on an album, why use machines to fabricate a bass section? Keeping it natural always adds a nice level of sincerity.

Similar to Chi Rho's Pardon, Love, this album is a "high 4" — very strong overall with minor shortcomings. If you're a fan of Christian a cappella, it's definitely worth your money. And even for non-Christian or non-religious people, Toward Home is likely to please with its solid musicianship and passionate singing.