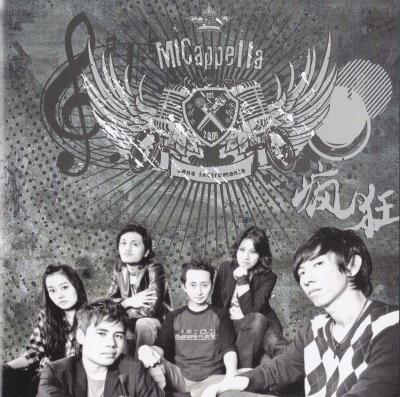 MICapella's four-song album is best appreciated as a demo, not a finished product. It displays the group as an energetic, hip and beautiful collection of young performers; music and content are reduced to a supporting role.

On the plus side, the group is attractive and sounds like they put on a fun show. The songs have good narrative structure, usually paired with a dance beat and a fair amount of energy. The soloist on track three, Yang Cong, turns in a very good performance, and the group's periodic unisons and performance-oriented breaks have a wonderful energy about them.

On the minus side, everything is out of tune. Really a lot out of tune. The songs are the sort of bland Asian pop that seems written expressly as background music, and Please Don't Stop the Music is sadly imitative of that special kind of pastiche techno where the bass line is required to be out of tune with the other elements. As interpreted here, it's fun to dance to and practically brings the club to you. But really, I wish it were reversed — in the club, all dark and lights flashing with fluorescent cocktails in hand, is the only place I'd ever want to hear it.

Also, the liner notes are crammed with text that is nearly impossible to read and skimps on information about the songs. Faded, faux-handwritten text on a mottled green-grey background. Yep, looks cool. Looks hip. Not so useful in my living room.

Based on this sampler, if I lived in Singapore and was planning somebody's high-school graduation party, I would totally hire these guys. Buy their album? Not so much.

MICappella's debut EP MICappella Feng Kuang is kind of a hot mess — a collection of good singers produced poorly. Individual soloists fare well enough, but as a group these guys have a lot of trouble holding the basics together. Tuning, blend, and balance are all abrasively absent to different degrees. It's unfortunate considering the talent one can hear just below the surface of this poor production.

I have no doubt that under live conditions the men and women of MICappella can perform well enough to hold a crowd. Unfortunately, with the visual aspect of their show missing, the remaining recorded sound proves that their tuning needs a lot of work to stand up to scrutiny. The group's close harmony arranging style on tracks such as the opener Zhiming and Chunjiao doesn't do them any favors. Once somebody falls slightly flat, the whole thing starts to unravel.

These tuning slips might have been easily avoided, or at least disguised, with some very basic studio love. The whole album sounds very rough and cold. It sounds live, but without the spontaneity or fun of a live performance. The bass and vp sound ok (the bass has a nice low presence), but generally threaten to envelop the rest of the group's sound. Add a touch of pitch correction, better EQ, and some more appropriate reverb, and we'd be listening to a much fuller, smooth-sounding album.

This is not to say that MICappella has completely eschewed the capabilities of the studio. Unfortunately, the attempts that are made at post-production effects are pretty uniformly bad. Case in point: the kazoo-guitar effect on track three, Yang Cong. Not only does such an effect sound really dated (this is pre-Five O' Clock Shadow-style guitar distortion we're talking about), but it's also so out of tune with the rest of the background (and mixed so far forward!) that it's downright grating.

The saving graces of this album are the soloists, who, though they have occasional tuning slips as well, do manage to hit some pretty impressive, expressive notes. The tenor soloist's sound probably isn't for everybody, but I give him (unfortunately not credited) kudos for some nice moments on Yang Cong up there in the stratosphere. Everyone sings with pretty decent energy as well, which is certainly a good place to start.

This group has the talent to make an impressive album, but unfortunately MICappella Feng Kuang isn't it. It's a debut though, so there's room to grow. I want to hear what MICappella can do with some more a cappella-savvy producers at the helm. Someone needs to help them let their voices shine.

MICappella is a six-person, co-ed, Singaporean group, and MICappella Feng Kuang is its first EP. The fact that the EP is so short (only four songs) is both good and bad: it's great for a new group to focus on just a few songs for its first recording, but a listener will barely get a sense of what this group is all about before the album's fifteen minutes are up.

First, repertoire: one song is in English (a cover of Rihanna's <song>Don't Stop the Music</song>, listed here as Please Don't Stop the Music), and three are not. Of those three, two (Zhiming and Chunjiao and Yang Cong) are by Mayday (which, I believe, is a Taiwanese band), and one (Wei Ni Feng Kuang) is credited to Journey to the West (Xi You Ji), which appears to be a recent theatrical adaptation of a 16th-century Chinese novel.

Not being an expert in Far Eastern music, I can't discern the exact source of these three non-English songs. It may not matter, but MICappella makes a point in its liner notes to refer to itself as "a true vocal band", and so I was curious if it was covering local contemporary pop/rock songs or not.

Either way, this recording is a competent first step. It's not perfect, by any stretch: the percussion is mixed way too loudly and becomes a bit distracting throughout. In addition, there are some blend issues where background singers don't appear to be singing consistent syllables/vowels, and so different voices stick out, especially in the second half (and quieter moments) of Zhiming and Chunjiao. The blend issues are better on Wei Ni Feng Kuang but the voicing isn't balanced and the song could use a lot more bass to balance out the higher ladies' voices. Yang Cong starts out like a lullaby, and yet the backing voices overpower the soloist (which make blend issues all the more apparent).

Please Don't Stop the Music has a ton of energy, and it's a cool arrangement choice to feature the "mama-say, mama-sa" part so prominently. But ultimately, this song showcases the group's biggest challenge: sounding like a six-person group. Here and throughout MICappella Feng Kuang, these songs do not sound like five singers backing one soloist. Instead, the arrangements and recordings sound a bit thin. MICappella can get around this with more intricate arrangements to help fill out their sound; six people should be able to create a thunderous resonance — even with one soloist and one percussionist. MICappella certainly has the energy for a fuller sound; now it's just up to the singers to figure out how to produce it in the studio.

To order this album, email the group with your mailing address, and they will contact you with payment procedures.