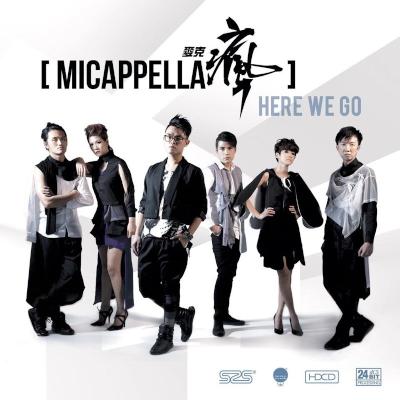 Here We Go is the fabled unicorn of a cappella: can something so unique and beautiful really exist?

If you're an a cappella purist, Here We Go sure ain't for you, but it's required listening anyway because nothing that's passed through RARB sounds quite like it. We often point to our friends in the nordic region as the trailblazers of a cappella, the ones who are boldly sculpting out new styles to sing and new soundscapes to explore in our genre, but we're adding Singapore to the Hot Spot list. Building on the success of the group's previous release, the self-titled EP MICappella, Here We Go is really our new standard of excellence and demonstrates an unmatched triple threat of vocal performance, arranging, and audio engineering.

Fusing cultures and genres effortlessly, the album starts with a two-pack of works that set the tone for a decidedly club-slant of an album. This is a release for dancers and party socialites; all you a cappella nerds out there will seem cooler by association with these flashy tunes rolling, so pop your collar and grab top-shelf bottles for this experience. MICappella's group anthem Here We Go is the headliner, and note for note, it might be the best a cappella track ever recorded. Arrangers will want to study Tom Anderson's continuous transitions and style shifts that create the form and structure of this piece, because it's all so very novel, and coupled with perfect audio enhancements from Ed Boyer to boot. It's almost silly that there's a remix at the end of the album, because any reinvention is simply unnecessary. A cappella unicorns are real, and this is the proof.

And for your example of pristine vocal performance, I direct you to Zhiming and Chunjiao for the delicious honey and cream harmonies. It's all style and skill for MICappella, with a genuine unified exuberance to tie it all together.

Where our American a cappella scene typically has a standard line-up for recordings that includes arrangers, mixers, a mastering service, and an album producer, MICappella is operating at a level that also includes distributors, marketers, managers, stylists, make-up artists, video and photography directors, plus album and logo designers. It's all rather Hollywood, and the very expensive-looking and wildly shiny album booklet (far beyond liners) probably had a larger budget than most collegiate groups operate on for the year. It'd have been nice to find translations in the booklet, but I understand that we're the secondary audience. Anyway, all of this is to say that your cash is supporting the most professional and ambitious of a cappella endeavors, and it's all worth every cent.

The time is now to buy Here We Go. Have fun prancing on your unicorn!

Here We Go is not an a cappella album. Ok, relax, the music is all voices, despite all the lasers, beeps and blips, plucked strings, and swirling sounds. What I mean is that MICappella has put together what is first and foremost a pop album, one which happens to feature all voices. It's a pop album for multiple sensibilities, featuring everything from ballads to club remixes, originals to covers. Despite this ambitious reach, the songs have a few unifying factors.

It would be difficult to start with anything other than production because, frankly, the production is impressive, to say the very least. Group member and producer Peter Huang deserves plenty of credit for shepherding, as with the group's last album, an impressive collection of talent behind the scenes including top names such as Boyer, Sperandio, Feldman, and Hare. Perhaps most critical, however, was the role played by Tat Tong, whose substantial pop music sensibilities are on full display here. Tong co-wrote Here We Go, a shiny and sparkly bit of radio pop, and mixed the club-ready remix. He also mixed the deliciously entertaining Circus, which crackles alternately with jazzy puff, swirling keyboards and synths, and grumbly, juicy bass and drums. He also co-wrote and mixed Forget It, a sweet, natural, and entirely addictive pop ballad.

Other moments of mixing brilliance include Sperandio's screaming electric guitars and plucked strings in Wang Fei (Princess) and Boyer's smooth, shiny gloss on Zhiming and Chunjiao.

Underneath all of this studio wizardry are songs which are expertly-arranged (Tom Anderson arranged or edited most of the charts), and are most importantly well-sung. The rhythm section grooves without being distracting, and the backs are engaged and invested. Solos are strong, though I still don't feel like any of them have the kind of earth-shaking or soul-wrenching delivery which could take this album from being a polished and complete package to a landmark production. This is not to disparage or reduce the beautiful and tender solos on songs like Forget It, Those Bygone Years, or Final Embrace (San Chang De Yong Bao), but rather to acknowledge the hard truth that there are very few folks who can rip like Scott Hoying, Hannah Juliano, Alfredo Austin, and Austin Willacy, for example.

Regardless, Here We Go is one of the best a cappella albums of the year, perhaps of the past several years, and one which any RARB reader should own. MICappella may not have the kind of mesmerizing soloists that you can't ignore, but they do have everything else you could hope for in an a cappella album and in a pop album. Bouncy beats and slick sounds? Check. (Here We Go - original and Club Mix). Face-melting rock? Check. (Wang Fei (Princess)). Compelling ballads? Yep. (Zhiming and Chunjiao, Forget It). The ability to mix it up within a song? See Moves Like Jagger. Great singing, stellar arrangements, and brilliant production? Check, check, and check. If you haven't jumped on the MICappella bandwagon yet, this album's your golden ticket.

When you listen to an album and the first words that come to mind are vastly inappropriate, you've experienced one of two things. If unlucky, a horribly painful album whose creator should be dragged out into the street and forced to listen to it. If you're lucky, you have the experience I did with this album. Here We Go, by Singapore's MICappella, is a wonderful, sexy, energetic release from the rigors of daily life. MICappella has recently reached international recognition as first runners-up in the first season of The Sing Off China. They've used that momentum and gone into the studio to record this album.

Here We Go primarily features songs in Mandarin-Chinese, but there are two largely English songs and one Taiwanese track as well. The sense of play in the arrangements is evident, making the shift between languages just a nice quirk in a very cohesive soundscape. The CD production is top-notch with excellent mixing, blend, and spot-on choices for studio effects. It's effortless to listen to.

What's really special about this album is that from soprano to bass, and even the vocal percussion, the shifts from instrumental to vocal are seamless.

Getting nit-picky, the only critique I would give is that the club remix version of the title track is not different enough to warrant its inclusion in the track list. However, it's a nice treat for fans to geek out over.

I'd like to talk about some notables in the track list. One Night In Beijing has a very entertaining Chinese opera in falsetto. Wang Fei (Princess) and Oh Yeah have fantastic rock grooves. Oh Yeah also includes some non-traditional chords to add a new flavor to the mix. I particularly love the style changes in the Moves Like Jagger arrangement. Here We Go is the perfect title track and bookends the album nicely. Props should also be given to Zhiming and Chunjiao, the sole Taiwanese track from the film of the same name. I love the tight harmonies and its sweet reverent quality.

Here We Go is a terrific album. MICappella is definitely a group you will be hearing more from. I absolutely recommend this album to anyone.