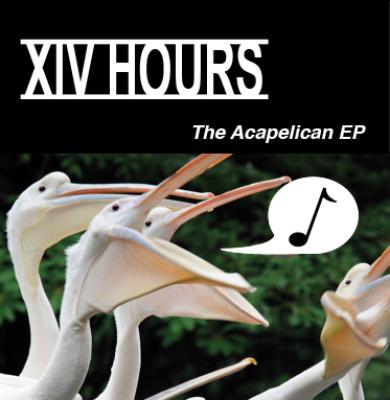 According to the liner notes, when I received this album, the Durham Academy XIV Hours had not yet been in existence for an entire year. They've also been rehearsing just once a week. That's remarkable, given the level of talent and depth on display. Much of the credit goes to Michael Meyer — faculty arranger, director, and vocal percussionist — who seems to be the driving force behind the group and the production of the album. Meyer is an alumnus of the UNC Tar Heel Voices, and is clearly comfortable with collegiate-style arrangements that take advantage of the large number of voices at his disposal. Kudos to Carl Taylor of Liquid 5th as well, who gives a level of sheen and pop to the tracks that we only dreamed of when I sang in a high school group. But none of this should take away from the high school students who make up XIV Hours, who also brought their A-game to the table.

The opening track is a Mika mashup. While Ring Ring, the primary song, feels a bit harsh at points, We Are Golden crashes in like a statement of purpose for the group — "We are not what you think we are, we are golden .... No giving up when you're young and you want some." The mashup is followed by Earth, the standout track of the album. While the original by Imogen Heap has a lot of vocal textures, Meyer's arrangement expands on the original. He broadens and deepens the song through the number and range of voices at XIV Hours' disposal, giving it additional weight without feeling overstuffed. It's a vocal tapestry, creating a world-beat sort of effect from the interplay between the low backs and the percussion.

My Heart With You left me feeling let down after the complexity of Earth. It reminds me of the obligatory ballad in the middle of a competition set to show that a group can do nice pretty choral ballads as well as the uptempo pop stuff. The arrangement is basically block chords, which are done well, but it comes off as a dud in the context of the album.

The most interesting choice on the album is an original rap verse in All The Above. The first verse is straight from the original, and comes off a bit cheesy in the delivery, but makes the later rap even more compelling. The lyrics, filled with references unfamiliar to someone outside of the Durham Academy community, seem to be taken from the personal experience of the soloist, Dan Browning. The second verse of Maino's original is recast in high school terms. The soloist comes from people "stealing my locker" and "making me cry" to becoming the Student Body President and name-checking teachers who have inspired him. The fact that the rap was written by faculty member Meyer rather than the rapper himself causes a bit of cognitive dissonance, but Browning clearly connects to the lyrics in a personal way and sells them. The verse ends with "take a look and you'll see the class of 2010", providing a nice bookend to the sentiments of We Are Golden.

There are moments that indicate that this is still a high school group. At points in both Ring Ring and All The Above, the female backing voices sound very young, contrasting with the more mature quality of the rest of the song. Meyer also seems fond of sticking the artist's name in the backing vocals, with "Mika" and "Maino" putting in appearances; such a gimmick doesn't really bear repeating twice in four tracks. But ultimately, this is a high school debut album better than some of the college albums out there. If this is what XIV Hours sounds like after a year, I can't wait to see where they are a year or two from now.

I find it both disheartening and encouraging that XIV Hours, a high school group that is barely a year old and rehearses once a week during lunch, can produce something that sounds better than half the collegiate recordings out there. The Acapelican EP is far from perfect, but it is symbolic of the amazing strides that high school a cappella has made over the years. It is not just good for high school; it is good, period. To borrow a line from Earth: "Look who's all grown up."

Speaking of which, I have listened to Earth more times than I can count, and it floors me every time. The arrangement is kinetic, and the mixing is beautifully lush. Soloist Emma Kimmel, class of 2011, sings with such maturity that she gives Imogen Heap a run for her money. This track definitely deserves its spot on Sing 7.

I wish I could say the same for the rest of the album. The main problem is that the singers don't really seem to understand the words they are singing, which alienates the listener to varying degrees. My Heart With You is the best of the rest, a choral affair that is pleasant enough but lacks the emotional depth and dynamic variation to go with the poignant lyrics. Ring Ring Mashup has a nice groove and a fun arrangement with some great sounds and syllables happening in the background, but the titular mashup with We Are Golden kills the momentum halfway through. All The Above is also somewhat of a let-down: the empowerment themes in the lyrics are undermined by a distinct lack of passion in the soloist and backing vocals alike. Finally, the unlisted outtake track is just unnecessary; put an MP3 on your website if you must, but this type of thing has no place on a professionally produced album.

Yet when I listen to The Acapelican EP, I prefer to ignore these flaws and focus on the fact that these sixteen students have an enormous head start into the world of a cappella. They have made some mistakes here, but won't waste time making them in their collegiate groups. They will understand the importance of blend, intensity, and musicality from minute one. They may even become superstars. Whatever happens, we certainly haven't heard the last of these kids.

XIV Hours' debut recording, The Acapelican EP, is a focused and spirited effort. Right out of the gate, these kids deliver an energetic and musical album that would shame many college groups. The director/arranger/vocal percussionist, Michael L. Meyer, deserves credit for bringing a very progressive musical influence to the group. These students are a long, long way from singing four-part arrangements of The Longest Time.

The production on this album is nothing short of fantastic. Carl Taylor, of Liquid 5th Productions, has created an album that sounds contemporary without being robotic. The bass is clear, without a trace of muddiness. The background vocals are well-mixed, never interfering with the soloists, who sound authentic and crisp.

The standout song, both musically and production-wise, is a solid cover of Imogen Heap's Earth. The original is performed a cappella, which is always awkward from an arranging standpoint. However, the arrangement captures the spirit of the original, while adding a few vocal bells and whistles that round out the performance. Earth is produced in a way that makes it feel warm and breezy, a refreshing change from the more standard hard-hitting sound that permeates contemporary a cappella. The soloist, Emma Kimmel, sounds absolutely fantastic. The group dynamic is solid, with great tuning, timing, and blend.

The album is not without its drawbacks. The soloist on Ring Ring Mashup sounds a little strained; Mika's vocal stylings are difficult to attempt. All The Above lacks the energy and drive that the first two tracks posses. The cover of The Rescues' My Heart With You, though a beautiful arrangement, drags in several spots. It's difficult to present an a cappella ballad on an album, as dynamics play such a vital role in the development of the song. Without a large dynamic range, the song feels stuck on one level, with no real movement. The original benefited from a raw, personal delivery, something the slickness of the cover prevents.

Recording an EP is a smart idea for a beginning group. Rather than spreading yourselves too thin, you're free to focus on a handful of songs and have the end result be more polished. These four songs left me wondering what this group could achieve on a full-length album, with the confidence of a successful first EP behind them. I'll be waiting.

To order this album, please send $6 and your shipping address to: