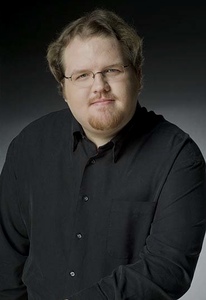 My name is Adam Johnson, everyone calls me "AJ", and I'm a theatrical sound guy and longtime a cappella aficionado.

In high school, my life revolved around the performing arts. I was a drummer, a singer, and a radio host. I did three summers of SPEBSQSA's Harmony Explosion camp, and I sang in two different high school groups. One was the still extant and dubiously named 13 Fish Named Jennifer. The other, an octet called Omnivocal, I co-founded as a summer project going into senior year. I wound up co-directing the group through graduation and being amazed as it survived for a few more years.

I went off to the University of Virginia, where I auditioned for five groups and got into none. This may have ultimately been a blessing in disguise, as I found myself the Assistant Sound Designer for a student production of A Funny Thing Happened on the Way to the Forum. A year later I had decided to become a Drama major, and declared just as the department hired its first Sound professor. I spent two and a half years doing sound design and engineering on shows ranging from Metamorphoses to The Call of the Wild: The Musical. On the side, I performed with the African Drum and Dance Ensemble and for a semester with the Virginia Glee Club (directed by Chanticleer alumnus Frank Albinder) until the schedule conflict became too difficult.

My early sound experience came almost entirely out of my a cappella background. I first learned about EQ when teaching myself vocal percussion and reading online about how to punch up my snare sounds. My first mixing experience was in a short-lived collegiate/high-school concert series my father and I cohosted at our church. And the first time I used Pro Tools was in my summer as Mainely A Cappella's intern, making part-learning tracks for the CASA songbooks in Don Gooding's home studio.

I now freelance in theatrical audio up and down the east coast. My résumé includes running shows at the American Repertory Theatre, Trinity Repertory Company, and Berkshire Theatre Festival and designing productions such as The Wedding Singer and Always... Patsy Cline. My spare time is spent taking in various kinds of performing arts, including poetry slams and storytelling series, and frequenting a plethora of local libraries. My a cappella involvement these days consists of buying albums, going to the occasional concert, and being that guy at ICCAs who complains to his friends about how the show is mixed.