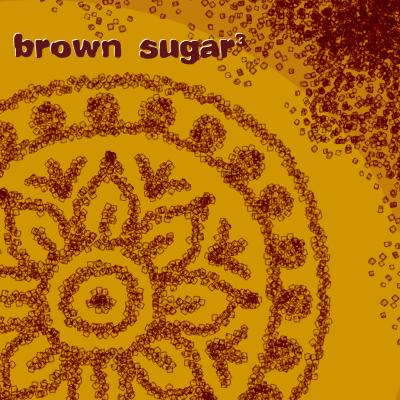 A musical friend of mine likes to end every show with "Be good. And if you can't be good, be interesting."

I feel much the same way about a cappella groups and so-called "niche" groups like those that were formed to specialize in a non-Western style of music. Having reviewed Penn Masala previously and having heard Stanford Raagapella, I'm familiar with this sort of group in its Western-meets-Indian incarnation, though Northwestern University's Brown Sugar was new to me. Regrettably, based on their third album Cubed, I can't really say they are either good or interesting.

It's a bad sign when the few tracks that are exclusively Western or Indian (English vs. what I believe is generally Hindi) are entirely unimaginatively arranged. This then spells doom for the vast majority of the album which features pairings of one Western and one Indian song which share roughly the same chordal structure. If only the second song in each medley would feature a unique arrangement of any kind, even if it were similarly plain, but more often than not, the same arrangement continues underneath the second song so really there is nothing new for the listener except the lyrics. And when those lyrics are in Hindi — unless you speak Hindi — you're going to be lost because there are no translations in the liner notes, and the website to which the group directs you to view translations does not actually seem to feature them anywhere.

Truth be told, on arranging alone, most of this album would have warranted a 2 or occasionally even a 1, as its block chord / word echo / ooh-ahh doo-bah backgrounds are just painfully simple and uninspired. When a more complex syllable pattern does grace your ear — say, the "jank-jank k-jank k-jank" of Taking Over Me" — it sticks out like a sore thumb, repeats ad nauseum and never combines with the surrounding background sounds to form a unified musical texture of any kind.

And while we're on the topic of sticking out, I should note that this group of what appears to be sixteen sounds like no more than a group of eight-ten. And within that, they consistently sound like four voice parts + vp and never like a cohesive ensemble. Shame on whoever recorded, edited, and/or mixed this for giving such attention to the sampling and sequencing of the vp and for caring far less about the overall sound of the group as a whole. I would call them out by name, but once again, the liner notes don't tell me who they are. Apparently, this was the "immaculate production".

All of this leads me to the question of "what's the point?" If you want to specialize in Indian music, then do it. But do it really well. Yes, it's a bit inaccessible for some of us, but tell that to Talisman from Stanford and other groups that embrace their uniqueness and excel at it. If you want to sing Western music, join the masses that already do. But again, do it really well. But by trying to do two things at a mediocre level or worse, it's all the more disappointing. I'm all for celebrating multiculturalism but no-better-than-average music making is rarely a cause for celebration.

How best to begin a review of an album that, no matter how hard you try, you cannot remember listening to most of? Cubed, the newest release from South Asian fusion mixed group Brown Sugar, falls in the middle of the road in almost all respects. From the get-go, the listener is greeted with a good if one-dimensional-sounding group, with few standout good moments and an equal number of glaring errors.

Brown Sugar's singing is not terrible by any means, nor is it particularly interesting. Most of the backs sound as if they're just going through the motions but thankfully find some appropriate emotion at the high points of most of the tracks. Equally flat is the percussion: the snare and kick sound pleasantly vocal but still punchy, but the hi-hat is completely unweighted and may as well be a click track.

Most confusing about this album is the thin sound coming from the backing parts. Brown Sugar is a relatively large mixed group, but much of their album sounds like there are perhaps six voices singing at any given time. This is particularly evident on Taking Over Me, where instead of hitting hard to support a lead worthy of an Evanescence cover, the track actually loses fullness as it moves from verse to chorus.

Perhaps the reason that Brown Sugar's album didn't move me was that for the most part, I've head it all before, done better. Penn Masala was arguably the first on the scene to do American/South Asian pop mashups, and is by my estimation the best in the business. Brown Sugar is borrowing that idea, and not quite executing it as well. Many of the group's songs sound like collections of musical ideas that abut each other, as opposed to flowing from one to the next.

I assume this comes from trying to mimic an aesthetic that may not be the best fit for them. Brown Sugar clearly has some talented vocalists who sing in traditional South Asian styles. Perhaps for their next release, they should develop further in this direction since they clearly have the talent and the understanding of the style.

Brown Sugar presents us with an interesting album with their latest installment, Cubed. While I feel like I can't quite give an educated review on the ethnic music presented here, I can certainly present you with my observations on the album as a whole.

Cubed is an album that meets the standards of an average album, but doesn't do too terribly much to surpass it. There are a few moments on the album where Brown Sugar really shows off its musical chops, but those moments are scattered throughout the album with a very light hand.

Eight of the eleven tracks are songs that any listener would recognize from the radio — at least, part of the tracks. Brown Sugar mixes all of their covers with Indian influence and lyrics. Most of these tracks rise to meet the bar, but there are a couple that rise a little bit higher. The R&B/hip-hop covers meld with Brown Sugar's Indian roots significantly better than the pop/rock genre. Like I said before, I'm not very familiar with this genre of music so I can't quite put my finger on why, but what I do know is that my ears were significantly more pleased when tracks seven and eleven rolled around.

From a production standpoint, Cubed lets me down a little bit. I find the overall balance of the album to be a bit off. Bass presence is lacking throughout, not to mention that I at times have to struggle to hear the soloist.

I would really like to hear an album from Brown Sugar that is full of tracks that are dedicated to their Indian roots, not another pop/rock cover album that has hints of it. The best track on Cubed by far is Khuda Jaane, which is one of only three Indian tracks. Cubed did the job, don't get me wrong, but maybe next time Brown Sugar will use Khuda Jaane as an example for success.

To download this album, visit iTunes. To order a physical copy, email the group's booking manager.