Christmas A Cappella Music, Volume One (1999) 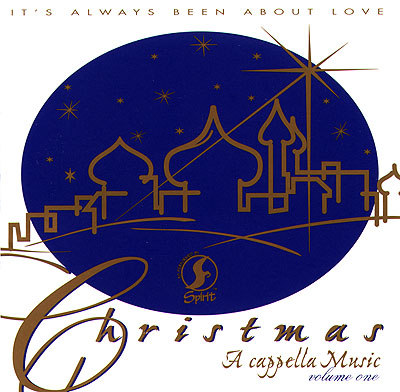 Christmas A Cappella Music, Volume One, Spirit's "first collection of sacred a cappella songs", steers clear of the traditional carols to bring the listener an album of largely unfamiliar Christmas music. The tracks range from John Rutter at his most schmaltzy, traditional English and American folksongs and spirituals, 20th century composers, and contemporary Christian songs. Such a wide range of musical sources makes it hard to please all of the people all of the time, so this CD may not be for everyone. Anyone who has a serious problem with overtly Christian music will probably not want to pick up this disc — the vast majority of the texts are in English (with a little Latin for good measure), and you can't miss the message.

I found myself drawn to the folk songs (Jesus Rest Your Head, To Him We Sing) and tracks by 20th century composers (Keating's Ave Maria and Young's There Is No Rose Of Such Virtue), and I realized it was because they were the songs I could see myself having the most fun singing. Many of the other songs on the album veered too close to the sappy end of the spectrum for my tastes — I wouldn't enjoy singing them as much, and I'm less likely to listen to them repeatedly. While the album as a whole demands more attention than Spirit's holiday children's album, it's because of the unfamiliarity of the songs; the majority of the songs still (for me) fall into the "background music" category, and only a few really challenge the listener to pay attention to what's going on musically.

As far as the quality of the singing, the album as a whole falls into the pretty good category: tuning is pretty good, blend is pretty good. Spirit creates a nice, full sound for the size of the group (10 members). While some nice dynamic contrasts do make an appearance here (To Him We Sing is well-executed), I'm still most familiar with Spirit's mezzo-forte, and I'd like to see some more variety. I was somewhat annoyed by the occasional diphthong (especially in an "ay" vowel) in some of the Latin texts — not always, but sometimes, even on the same word in different places, and it just seemed sloppy.

Christmas A Cappella Music, Volume One isn't going to surprise anyone with any ground-breaking qualities, but if you want a pleasant album of less obvious sacred Christmas music, this CD may be for you. If you want less pleasant and more challenging, or if Christmas for you is more about Santa Claus and Rudolph than Jesus, then you'll probably want to look elsewhere.

OK, let's not beat around the bush. Are you looking for some good sacred Christmas music performed by a choral ensemble? Look no further than Spirit. Christmas A Cappella Music, Volume One is a fine collection of songs performed by the talented mixed ensemble from Kansas. On this album you will find very good versions of sacred Christmas music ranging from Traditional American and English songs to modern compositions to a Negro Spiritual. They even have the ubiquitous John Rutter arrangement in the mix like any good choral ensemble has.

Like I said, they are very good, well performed and well produced. This is exactly what you'd expect from a well-trained professional group of this caliber. I am especially fond of the opening song One Small Child.

I love reviewing good, solid albums because it generally appeals to my lazy side. I usually don't have to bother talking too much about it because it is exactly what one expects, and does not disappoint. I certainly don't need to say anything more about this album. It is very good, and would be a fine addition to your Christmas music collection, without a doubt. That is all.

Another Christmas album by Spirit, and overall there's nothing spectacular here. The soprano section is a bit warbly for my tastes - like your friendly neighborhood aging church choir — and it is frequently an issue, on Candlelight Carol, ...New Born King (which was also a tad square for a spiritual), To Him We Sing, Ave Maria, What Can I Give Him, and others... Group tuning is good but hampered by a few extreme vibratos.

There is something about the recording quality of this CD that bugged me, and I can't quite put my finger on it — maybe someone else will address this in more detail. At times the sound of either the group or specific soloists was less than stellar — perhaps due to the recording process itself, perhaps a reverb issue. I'm not sure, but I did notice it a few times...

Don Baker's solo on One Small Child is reminiscent of GLAD — bright, contemporary, and sung with feeling. It's perhaps the one moment that stands out from traditional renditions of traditional songs sung by a traditional group. Still, Still, Still is one of my favorite Christmas tunes, and this rendition didn't really do it for me. I felt it was a little stilted and could've used a more gentle touch. The same feeling struck me with the Ave Maria and a couple other tracks. Not bad renditions, just not extremely touching or strikingly beautiful.

This album is an OK one as background holiday music while you carve fruit cake or spray your tree with fake snow or spike the family egg nog, but don't expect anything ground breaking or especially memorable. Go to church Christmas eve and make your own music instead.

Christmas music may be the only genre that Spirit knows, and their tastes range from ballads to upbeat children's songs. However, Christmas A Cappella Music, Volume One narrows it down even further, actually focusing on a cappella singing. The first track on yet another Spirit Christmas album was uplifting and hopeful. It had much more emotion, passion, and was completely a cappella in comparison to their other CDs. The second and third song are strong as well, and this is the kind of CD one would pop in the player with snow gently falling outside as you cuddle up by the fire. It really is soothing, pleasant Christmas music that is sung with a powerful delicacy. By the time I reached the fourth track, (even after listening to the album several times) I found myself a bit tired of the same overall sound on each track, yet was still very calm and content from the music. By the time you reach Still, Still, Still the group peaks again, with a song that has great dynamics, diction, and flowing, well-crafted phrasing.

I'm able to narrow down more specifically what I don't like about Spirit. When the women have solo-like vibrato singing amidst a choral arrangement, it starts to lose the pure, ethereal sound that they want to capture. The vibrato also is NOT controlled, and 80% of the pitch problems in their music come from the vibrato of the women (or perhaps there is only one person). If Spirit can figure out who does this, please tell them to stop! (Another minor criticism: all of the albums have the same booklet layout with the SAME photo of the group, one that could've been taken yesterday or 15 years ago.)

Finally an album that is completely a cappella by Spirit, one that has much more enthusiasm and drive. Although the album is much stronger in the beginning and drops off a bit towards the end, this is a beautiful Christmas album to add to an existing collection of holiday music.

Spirit has produced a very fine, very smooth collection of Christmas music on Christmas A Cappella Music, Volume One. The group shows great evidence of having spent and sung much time together, especially in their fantastic blend which scarcely falters from track to track. As part of that long experience, the group shows as well great comfort with their song selections.

As for the selections themselves, they favor mellow, traditional pieces against more jazzy, upbeat tunes. Combined with the superb blend, this produces a sort of bland conformity from one track to the next. If anything on an album such as this could be improved, it would be the variety of songs sung. As it stands, it sounds fine, but only in limited doses, and preferably spiced with other sorts of Christmas songs from other albums or groups.

As it turns out, Spirit is as prolific as they are proficient, with numerous other albums available. In combination with those, this album would let the group shine, showcasing their marvelous blend while letting the listener enjoy a range of musical styles. In general, Spirit has produced an album fine for background listening or mellow get-togethers, but which demands some more exciting company for extended listening.