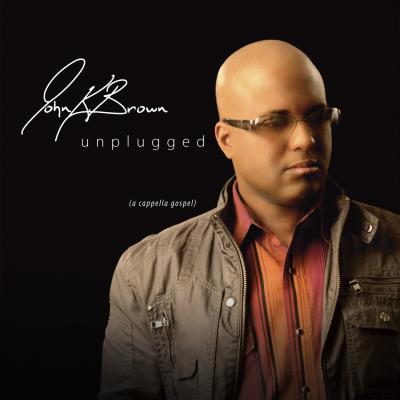 Rockapella's "other" supertenor, John K. Brown, cuts loose on Unplugged with ten tracks of soulful, danceable, riff-tastic R&B-gospel. If you're looking to praise Jesus while simultaneously shaking what your momma gave you, then bust out that credit card and say amen; this purchase is a must.

Eight out of the ten tracks are original tunes; ten of ten are original arrangements. That's a mighty impressive showing in a genre known for cover tunes. With a singular artist crafting so much of the material, the tracks sound like they belong together, like members of a family. That clear, signature sound makes for an extremely cohesive listen. And for fans, if you like one track, you'll like them all.

The songs don't push boundaries melodically or harmonically, but rhythmically they show a pop sensibility and sophistication that, along with JKB's soaring, agile tenor, takes the scores over the top. Slick production choices and radio-ready beats just seal the deal.

The word "unplugged" gained wide acceptance through MTV's long running series featuring artists performing in an acoustic, stripped-down, minimal, natural and unaffected style. JKB's Unplugged begs the question, but bears no resemblance to any of these descriptions. His tracks are great, but they are heavily effected. In fact, few effects sound less natural than the robototune effect (a la "Auto-Tune the News") and JKB uses this sound generously.

Brown lays down all the leads, much of the rapping and spoken accompaniment, and the overwhelming majority of the background harmonies. He's a fantastically talented performer, but one wouldn't typically call that kind of one-man multi-layering "unplugged".

If the album title is meant to refer to this project's separation or unplugging from Rockapella, that also seems somewhat dubious, as Rockapella's Jeff Thacher performed and recorded the earthshaking vocal percussion for the entire album, and Scott Leonard, lead singer for Rockapella, is specially thanked for his mentorship.

So, from what is JKB unplugged? That remains a mystery, but thankfully, it's one that won't detract from enjoying these songs.

Speaking of credit, JKB does it right, making sure to credit S. Perry/J. Cain (and not the often used, but wholly insufficient "OBP Journey") for Open Arms. Like the simple, excellent images in his liner notes, it's one more mark of the artist's class and professionalism.

Minor criticism: John is unquestionably a spectacular tenor soloist, but as is commonly the case with tenors, his speaking voice is a shade closer to munchkin than the average man's. On some of the rapping/spoken sections, John's swagger is slightly undercut by the boyish quality that very high tenors naturally possess. This is a quickly forgotten distraction once John begins to sing.

Unplugged takes the precious, rough stones of JKB's last release and polishes every one of them to a brilliant shine. If the genre of R&B gospel appeals to you, if you love groups like Naturally 7 and Rockapella, then it's time to add John K. Brown's Unplugged to your collection.

What a difference a year makes.

Where Rockapella tenor John Brown's debut solo work bOObOOm was a well-intentioned, polished if somewhat unsatisfying effort, his follow up Unplugged is a fully realized, terrific collection of gospel music that should leave people of any and all religions — or no religion — inspired musically if not also spiritually.

There is perhaps some (unintended?) irony in the album's title, given that Brown's signature sound is probably most rooted in hip-hop and funk, with generous sprinklings of rap and R&B and even the occasional dose of dance hall, and his and vp Jeff Thacher's means of creating that sound is heavily rooted in all sorts of electronic studio trickery.

But possible misnomers aside, Unplugged has a consistency of style and a sophistication of arrangements that was sorely lacking before. Gone are mere musical "ideas", replaced by true songs — many of them wholly original. If there is a repetitive quality to a number of these compositions, it's not out of place given that Brown clearly labels the album "a cappella gospel" and that hypnotic, theme-and-variation quality is consistent with that musical tradition.

Where the album falters only slightly is in its unwillingness to stray too far from the tried-and-true. Not every single track needed a spoken word, preaching-like ornamentation — Open Arms in particular, where the unusual groove offered up a chance to break out of the mold established by the preceding songs. There is also a constant inventiveness in the background blocks of the first few songs, both harmonically and rhythmically, that fades gradually and becomes a little more basic and streamlined in later songs. That same level of creativity is of course not easy to sustain but it would have helped elevate some of the 4s to 5s.

I should also note that I have chosen to assess this work on its own terms, and as such it's quite wonderful. To be clear, though, it's very much a hit-you-over-the-head, Jesus-saves, Bible-thumping, scripture-quoting Sunday morning sermon of an album. For many of you, one or two samples — I would recommend the first two — would be sufficient to give you the gist. But to me, it's less the message and more the a cappella. And the a cappella is first rate and a most enjoyable listen.

John K. Brown is an unreal talent. Incredible vocal power, seemingly limitless range, and bountiful joy and energy — it's enough to make us lesser mortals tremble in fear when he sings. Unplugged, a solo project (Brown is currently singing with Rockapella), is the perfect showcase for Brown's unique abilities, boundless energy and spiritual fervor.

First off: the voice. That voice. It's sweet when it needs to be sweet, soft when it needs to be soft, powerful when it is required to be powerful. His falsetto is light and almost ethereal, floating comfortably above the din. His playfulness recalls Cee-Lo Green, especially when he interacts with his daughter on the charming track Lil'D's Prayer Song. His commitment to whatever he's singing is so total, so filled with energy and fervor, that every background part is as exciting as the lead vocals.

Gospel and a cappella have always shared a loving relationship, and Unplugged shows exactly why that is. What instrument but the human voice can accurately convey the deep inner emotions that are paramount in a spiritual relationship? And though the vocals are sometimes processed (particularly low-end vocals, which are distorted and warped into all manner of beeps and boops), the beauty and power of the human voice never once disappears from view.

The only faults I find on the album lie in the individual tracks — the overall presentation, performance, and conception of the album is flawless, in my view. Some of the tracks (Break Through Lord, Let's Do It Right, and Jesus Is Real) seem flatter and less dynamic. Energy runs through them like a current, but they don't jump off the record like Worship Now or Open Arms. I'm also not sold on Joy/I Love You Lord as the album closer; the song may have a wonderful build, but it doesn't reach the dizzying heights of some of the other songs on the album.

If you have an interest in gospel, and even if you don't, you would benefit from checking out Unplugged. The album is soaring, lush and gorgeous.

This album is available at the iTunes Store, CD Baby and www.projectjkb.com.