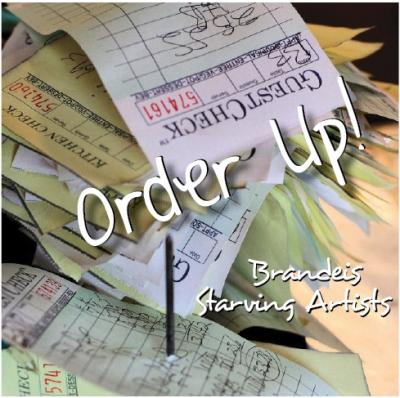 You'll want to go ahead and read the RARB reviews for previous releases offered by Starving Artists. Not so hot, huh? Lots of stinging observations about mediocre singing. Order Up! isn't a masterpiece, but it's a solid disc earning lots of style points. And the singing is definitely not mediocre. Indeed, the Starving Artists' second consecutive release with a food title (Oh, those hungry college kids!) is a mainstream-sounding collegiate album that satisfies the ears and the appetite.

The Starving Artists have a deep lineup of respectable soloists to call upon. The first four leads opening Order Up! are bam-bam-bam-bam great. In particular, the funky-fresh jazz spin Andrew Litwin gives Geek in the Pink is just right. The gentle delivery Rachel Wolfman sings on Angels might not be intense enough for some, but I find it crazy effective, especially with the blossoming arrangement (also by Wolfman) underfoot. It makes you hold your breath, be still, really listen. Further into the album, Abby Armstrong is a knock-out on Misery Business, channeling just the right kind of aggression. Conversely, a few soloists on Order Up! do seem ill-fitted to their roles and bring the songs down (Her Diamonds, I Turn to You).

Now about those style points. Everybody's Fool is genuinely believable raging rock, a genre many groups struggle with since it requires great testosterone, fiery females, and crafty production (provided here by Liquid 5th). Wanted is a fabulous catchy opener and a lot of fun. And My Life Would Suck Without You has a ton of power and flair behind it. There are a lot of special touches and engaging arrangements on Order Up!. Sometimes the arrangers get a little crazy stuffing songs with mouthfuls of syllables, but given that the Starving Artists really needed to bring strong creativity to this release, it's forgivable.

Obviously, I like Order Up!: a marked improvement, largely good singing, and largely good song choices. There's some real depth here, and it sounds like the Starving Artists have finally got a hold of things.

"What was that, High School Musical 4?" — My roommate after overhearing Order Up!.

It's a pretty fair and succinct critique, actually. Order Up! is certainly exuberant; these guys and gals have a lot of energy, but also sound pretty rough around the edges. Most of the solos (with a few noteworthy exceptions) sound pretty karaoke, and tuning across the board tends to be a little grating. All might be forgiven if these errors were stumbling blocks on the road to something new and different. Alas, this album is business as usual — and uneven business at that!

For the most part these songs are all transcriptions, so there's not really a lot of opportunity for the Starving Artists to do anything really ear-catching. Moments come and go; I liked the cascades in Angels, and the choruses of My Life Would Suck Without You are pleasantly in-your-face and fun, but in general this album plays like a mixtape without a theme. To that end, Order Up! lives and dies by its soloists.

I dig the male lead on This Time Around, whose tone cuts nicely in his upper register. Other folks have nice moments here and there, but generally sound a bit stilted in their phrasing. Most of the ladies ride a little low on the rock tunes so that the effect of their belting is overridden by the discomfort of the friction between them and the backgrounds.

Pitch problems aside, I think I like this group more when they're rocking out than when they're attempting to be smooth. Their exuberant, earnest energy is a much better fit for bouncy rock (Misery Business) then pop-soul (Fallin'), if for no other reason than their in-your-faceness makes them sound totally committed (but not exactly cool).

The Starving Artists have some work to do to smooth over their sound. Whoever produces the group's next album needs to give the solos a little more love — try to get everyone to sing with more natural and stylistically appropriate phrasing. Leads could be edited a little more gracefully as well to make sure they don't ride so flat. The Starving Artists sound fun, but the group is still a bit shy of being artistic with its sound.

Order Up! is pretty good for a yearbook album. That might sound like damning with faint praise or a backhanded compliment, but yearbook albums actually serve a good purpose: they provide a valuable snapshot of what a group sounds like at a moment in time.

The challenge for the Starving Artists is to find songs at which this group can excel and, unfortunately, the song selection on Order Up! does not showcase the group's soloists. Christina Aguilera (I Turn to You) and Alicia Keys (Fallin') aren't the easiest singers to cover, and the Starving Artists' versions are sub-par. Evanescence presents a similar challenge, and the group solves it with a male soloist, but the song really calls for powerhouse wailing and the group just can't deliver.

Arrangements are similarly challenging. Misery Business begins with a choral "haa-haa" intro, when the song would've been much stronger starting from the "rawk" section. My Life Would Suck Without You features a grating "ooooh-la-la!" background part, then includes a clip of Pink's Who Knew. The medley is okay, but the subsequent mash-up layering of the two leads is a distracting mess.

All that said, what makes Order Up! better than average is the group's energy. Listening to the album, you believe these singers: they're having fun and they're enjoying being part of this recording. That might not seem like much, but there are plenty of a cappella albums now where the group doesn't sound at all invested or interested in what it's doing, and it's always nice to hear an album where that isn't the case. That's not enough to make Order Up! more than a yearbook album, but as a yearbook it works well. It won't have a wide audience beyond the group's fans, friends, and family, but it will be an enjoyable enough listen for that audience.

To order this album, visit the iTunes Store or the group's website.