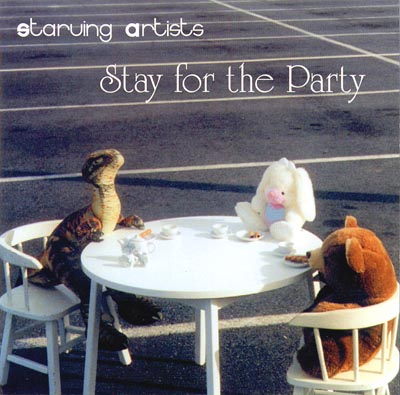 Starving Artists' Stay for the Party is pretty good. The Artists offer up a quirky variety of music with some innovation throughout, both to their credit. Some songs and a few singers shine. But lack of energy, uneven recording quality, and ineffective soloists take away from the total.

The album opens on a high note, an ambitious rendition of Carry on Wayward Son which the group does well. Their success here sets the tone for their success elsewhere; the singers do best on chord-driven tunes, if not outright homophony (Tonight and the Rest of My Life and to a lesser extent Don't Stop Believin' are good for the same reason). It also introduces a problem which becomes more apparent as the disc rolls on: mismatch between soloists and song (see below).

By contrast, the singers' performance is less convincing the more polyphonic the song: Bliss, All I Want and especially the hypermodern Bills, Bills, Bills all suffer.

Adding to this is a general absence of energy. Part of what allows the opening track to succeed is its melancholy; the group is far less at home in up-tempo tracks. The arrangements themselves seem to slow things down, but energy is missing above all from the soloists. The singers have almost uniformly gentle voices, and as soloists are often paired with a song written originally in a different octave or by someone with a bit more life experience...interpretation suffers.

All told, Stay for the Party could have used more party. Like the tea-drinkers on the cover, the listener is treated to something quirky but not entirely satisfying. Like the lone dinosaur on the reverse, he may need to seek something stronger after this pleasant but lackluster disc.

The album design of Stay for the Party is at best amateurish. I feel the need to comment on it because the look of the album does in fact count toward the quality of the overall project. I understand that you are still in college, but surely you could have come up with something a little more creative, or at least somewhat stylish. Imagine giving your son/daughter this album 15 years down the road to show them what you did in college. They are going to see a bear, a dinosaur, and a rabbit eating dinner in a parking lot at a kiddy table (not to mention the bottle of Smirnoff Vodka next to the dinosaur on the back cover). How can you expect them to take this project seriously? How can you expect ANYONE to take this project seriously?

The majority of arrangements on the album were of good quality (though some very simplistic); kudos to the various arrangers' hard-work and musical abilities. The leads on tracks varied from good (Sara Szafman on Carry On Wayward Son and Aliza Saivetz on Tonight and the Rest of My Life) to poor (Karina Gritsenko on Bills, Bills, Bills and Anthony Yu on All I Want). Vocal percussion was solid over the majority of the project, with the most interesting/creative work showing up in Bills, Bills, Bills.

I really enjoyed the end choruses of Stuck in a Moment with the multiple voices on lead. This was a good sound for this group in studio, one they should experiment with more in the future.

The basses in this group sing very melodic running lines that sound great, but eliminate a major bass presence in the overall sound of their studio tracks. My suggestion would be to split the bass parts in the arrangements (or record two separate ones in studio); that allows you to keep your melodic movement as well as adding a tonal bottom to your chords.

Faith was interesting. I applaud groups when they take a song and perform it in a totally different style than the original (see Random Association's Smells Like Teen Spirit off of their self-titled 2000 release). I'm not sure what the problem was with Faith, but it just missed the spot. I liked the idea, just not the execution. Perhaps re-vamping the arrangement, a different soloist, or even just more people buying into the overall sound you're looking to create would help.

This album and the group have a long way to go, but they do show potential and promise for the future. I'm hopeful that things will improve for Starving Artists, because this album won't be putting any food on their table anytime soon.

The Starving Artists Stay for the Party probably ranks just above average for collegiate a cappella.

Their arrangements are nicely structured with a bit of variety, they have a good grasp of tempo, and their voices are pleasant and generally in tune. I liked their song choices; there was a distinct lack of a cappella standards, with no Beatles or Boyz II Men in sight (yay!). Some more contemporary tracks from artists like Destiny's Child and Matchbox 20 made a nice change.

My main criticism of Starving Artists is that the bulk of their soloists are a bit weak. They seem to have fallen into the common trap of giving just about every member a turn at singing solo. I understand that it can be politically healthy within a group for everyone to get a turn, but there are lots of people out there who make enormous contributions to their a cappella groups by singing wonderful backing vocals and never approaching a lead mike. The Starving Artists might like to consider rethinking their current policy on this.

There were a couple of exceptions. Karina Gritsenko sings a wonderful, gutsy lead in Have Fun, Go Mad. Behind this voice, I sense even more power that will evolve with time. I also really enjoyed Matthew Cohen's very unusual, dark tone in Don't Stop Believin'.

Most of the arrangements on the album are fairly consistent with the original presentations. Thrown into this is a rather innovative, strong and sultry version of George Michael's Faith that really worked well, with Sara Szafman doing a very creditable job of carrying off a sometimes difficult lead line.

In sum, a very creditable second album that Starving Artists can be rightfully proud of.