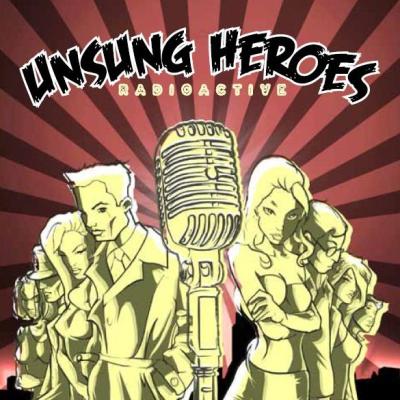 Radioactive is the debut album from the decade-old New York City coed (post-collegiate) group Unsung Heroes. These eight singers definitely have a defined aesthetic: easy-grooving R&B songs are their forte. The strongest moments here are when they settle into a boppin' groove, such as on the choruses of Thank You, the hazy opening verse of Chariot, the whole song Bleeding Love, and (most especially!) the climactic final chorus of I'm Outta Love.

The challenge for Unsung Heroes is to balance those extended grooves with sharper details. Sometimes, those grooves just sound cottony: the long drawn-out chords during the choruses on Chariot really drag down the song's energy, even though that arrangement style set a good mood during the verse. Similarly, Bleeding Love and Thank You both have a solid vibe, but they feel a little monotonous; a little variation in the arrangements and/or more dynamics would've done the trick to keep my attention during the entire song.

In The End really sticks out against the rest of the songs here; Linkin Park is just an odd choice for this group, and while they did try to give it their own spin (alternating between a male and female soloist), the song never really gels. There are a few stylistic choices — namely, the female soloist's vocal tone and her stretching of the word "end" to two syllables ("ay-end") — that become really grating after several repeats. Soloists in general seem to be a struggle for the group; the leads on With Or Without You and Mercy On Me are competent but never really deliver a captivating performance, and there's not a single lead here that's memorable beyond the span of the album.

Most of these issues, though, can be written off as "rookie mistakes". Sure, Unsung Heroes has been around since 2002, but this is the group's first recording, and any group learns a lot from its first time in the studio. Radioactive has some strengths and is a good first step for the group, but these singers would do well to spend time building on it by thinking about what makes for a truly compelling performance (solid leads, good dynamics/variation in arrangements, etc.).

Unsung Heroes, a post-collegiate group based in New York City which is celebrating its tenth year of existence (quite an accomplishment for a non-professional group), has generally kept a low profile outside of the greater metropolitan area. The group was, however, labeled one of the Best A Cappella Groups in NYC by Time Out magazine and apparently "recruited" for all three seasons of the TV series The Sing Off.

So, what does this group offer up in its debut album Radioactive? A little of everything, for better and for worse. The music is standard "jukebox" cover album fare, with erratic selections bouncing from Anastacia to Ben Folds Five, Boyz II Men to Linkin Park, etc. Few of the songs really innovate with the notable exception of the oft-covered Ain't No Sunshine. Chris Serico's arrangement here mashes up the original, the House Jacks cover, and the Lighthouse Family cover, resulting in a sultry, grooving version over which he offers a growling, gritty solo. Samrat Chakrabarti's arrangement of U2's With Or Without You builds and soars appropriately, but the solo doesn't quite hit it out of the park (hard to blame anyone for not matching Bono in the soaring vocals department). On the other hand, Juliana Tarris's committed and plaintive solo on Mercy On Me is some of the most passionate singing on the album.

Other songs, like the plodding Bleeding Love (a strange choice to open the album) and the jazzy, but somewhat boring Chariot are less inspiring. The naked sound on Underground feels a bit like a parody of the original, with a disappointingly safe and fluffy version replacing the fuzzy, pounding staple from Ben Folds Five's debut album.

Nevertheless, the album has a fairly consistent overall "bop" factor, meaning I couldn't help but nod my head along to the vast majority of tracks even if they weren't breaking new ground. Very little on the album, which was produced, recorded, and mixed by John Clark, sounds bad. This is particularly admirable considering that the album ranges from instrumental-sounding songs, processed in the studio to create jangly guitars, beeps and blips, mechanical percussion, and an octavized bass on some songs (In The End, With or Without You, No Substitute Love), to a more naked, organic sound on others (Underground, Ain't No Sunshine, Mercy On Me). The songs in the first category are clean and tightly produced but don't breathe a whole lot, suggesting that the sticky-sweet sound may have come at the expense of a more energetic and enthusiastic sound. The two best songs on the album, Ain't No Sunshine and Mercy On Me, come from the second category and feature swampy, soulful singing. If these singers can perhaps substitute some innovation and energy for studio enhancements and explore what it is about the style of these two songs that ignites them, they'll really be heroes.

After a decade-long career as a semi-pro group, Radioactive by Unsung Heroes is long overdue. While I would not necessarily play every song at my next a cappella get-together, they clearly prove why their existence is relevant.

Radioactive manages to avoid some common debut mistakes. The production quality is good. Song selection is not packed with only Top 40 hits. Arrangements are full and interesting. What the group really accomplishes well is the ability to get the listener up and moving with their upbeat selections. They have what I call the "groove factor".

I'm Outta Love is easily my favorite track. Samantha Cordon steals the show with an impressive lead, which is complemented by a well-produced bass sound and nicely layered backing vocals. I know the Anastacia dance pop tune is from the '90s, but the sound is very reminiscent of an '80s dance club track. The other standout track in my opinion is No Substitute Love, originally by Estelle. This group really thrives when they are driving the rhythm of a song. The layering of voices, especially during the second half of the song, as well as Whitney Wood's subtle yet affirming lead, really gives the song everything it needs.

Unsung Heroes also proves that the male talent is present in With Or Without You. Looking at all of the tracks, it is the most balanced in terms of having everything: full arranging, dynamic build-up, and the needed production to tie the sound together. Oliver Libby delivers a solo with conviction and emotion that makes us all remember why we are fans of U2.

But when all is said and done, Radioactive is an album with memorable moments but nothing truly groundbreaking.

Some of the tracks are tunes that most collegiate groups have covered one too many times; such is the case with Thank You and Ain't No Sunshine. Not only this, but the energy and dynamic contrast brought to some selections are not evenly spread across the board. In The End does not quite bring the rock intensity expected from the mainstream hit we have all come to love and enjoy.

What also holds the album back is that the female talent outshines its male counterpart. The album seems imbalanced as there are such strong female leads. With a few more standout performances by the male leads, this album could have been that much better. This could be in part to the song selection for the male leads. When it comes to co-ed ensembles, I have always been a fan of equally distributing emotionally driven leads between both genders. This shift could potentially help out in the future.

Unsung Heroes has hits and misses with Radioactive, and at the end of the day, it is a decent album. At the very least, there are a few tracks definitely worth listening to.

This album is available through the outlets below, Amazon, or the group's web site.