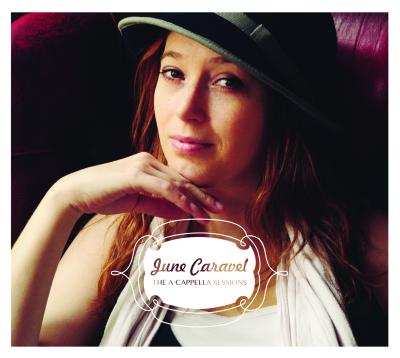 If June Caravel was serious about finding a wider audience, she'd have put out a six- or eight-song EP and let her husky voice, good looks, and chic packaging work for her. Instead she's put out a ragged fifteen-track basket of ideas ranging from folksy to Flasteresque.

The A Cappella Sessions starts off promisingly with London Song, which has a London-Portland-Brooklyn sort of rustic charm. It gives off the sensual vibe of a pretty girl in a white dress at a music festival who has gone a few days since her last shower. She probably has long hair and might well be wearing cowboy boots, and the pot-smoking guitar players understandably can't take their eyes off her. Summertime keeps up the festival vibe — she takes Gershwin for slow jam and I can almost hear the campfire crackling as it burns down. And in between is Primavera, which I love even though it's pretty out of tune, where June and her friend Lucia Barahona trade licks over a Zap Mama-meets-Vocal Sampling background. It oozes soul and the kind of international vibe that our squeaky-clean first world acappellaverse usually sorely lacks.

After these three tracks I'm in a good mood that carries me through the next three. Ceasefire is a pretty good song, maybe a little too long, but okay she wants to keep the slow jam going. Some May Go is a weaker composition, but okay it's got a nice rhythm with its groovy breaths and handclaps. I'm Not Forgiving You keeps up the handclaps, brings us some nice energy and an engaging you'll-be-sorry vibe. So far so good.

And then train wreck! Oh no! June, how could you? This Bach thing is terrible: badly arranged, badly performed, totally out of time and out of tune. I understand the creative impulse that led to its existence, and I don't begrudge her the idea. But for the love of little lemons, this track should never have seen the light of day. There's a sort of percussed back beat that clashes with the Jesu, Joy of Man's Desiring theme and also a wretched melodic overlay. There is no key. There is no time signature. There is no excuse for anyone to make this public unless maybe it's part of a comedy routine. As it is, it absolutely sinks the rest of the disk.

Non Voglio un Caffè could have actually been a funny track, a sort of mocking Paolo Conte sendup. It's only a minute and 45 seconds, why am I not giggling? Oh yeah, the Bach just sapped my will to live. No, I don't want a coffee! I want an aspirin. I can no longer get my groove back for Sunday Morning, which is out of tune but also sort of catchy and which I might have given the benefit of the doubt two tracks ago. I Can't Hold Inside reminds me of Paul Simon's The Capeman compositions. It is nicely written and has block chords, which would be pretty if they were in tune, since Caravel has a nice voice that blends well with itself. As it is, my head hurts and I am still reeling, can't get my head back in the game. I'm giving it an okay score because I like it and she wrote it and we need more of that, but really I wish she'd rehearsed it more and made it into something to be really proud of instead of a performance with so many flaws to overlook. And then the French song is rough and I'm Gonna Put Some Make Up On is a populist attempt to go downmarket that just flops, completely. It should be a joke, but it's not, and it's awful.

And then — are we done yet? — oh no, remixes. London Song (Unsungwarrior Remix) should have stayed unsung; it strips out most of what was charming about the original take and replaces it with most of what can go wrong in house music. The beats don't line up, with each other or the original vocals. None of the elements are in tune with anything else. I've been dancing recently enough to know that this is typical, so maybe these tracks will find some sort of audience, but this musically oriented corner of the web is not it. Such flagrant absence of tuning flares up on the other remixes as well, although I'm Not Forgiving You mostly holds up and I'm Gonna Put Some Make Up On can't get any worse and is therefore slightly improved by the goofy synth tracks.

If you're curious about June Caravel, see if she puts her better tracks up for streaming somewhere and maybe donate some money through some sort of hipster/indie fundraising campaign. But don't buy this record. Sorry.

One of the best things about a cappella music is the diversity it allows; the human voice is unparalleled in its range and flexibility among instruments, allowing for unmatched stylistic and creative potential. The Recorded A Cappella Review Board, being an institution working mostly within the contemporary world, does not always get the opportunity to revel in a wide variety of styles. So it's nice that The A Cappella Sessions, by singer-songwriter June Caravel, was submitted for review; this is a side of the human voice that is not always on display in our world.

The album itself is a showcase for June Caravel. Besides a few guests, the entire album is her voice multitracked into layered arrangements (think Petra Haden's a cappella projects). The backgrounds are fairly simple: pads, the occasional counter-melody, scratchy vocal percussion, and a bouncy bass that evokes memories of 1990s all-female collegiate groups. It's fun and relatively well performed, but the album seems mired in novelty-record territory. Some more ambitious numbers (a wickedly crafty version of J.S. Bach's Cantata No. 147, the saucy original I Can't Hold Inside) hint at what the album could have been; but when the songs amount to little more than a stacking of unremarkable background parts, it's easy to wonder if they wouldn't have worked better with instrumental backing.

That being said, June Caravel has a distinct and wonderful voice, rough around the edges but still capable of conveying real emotion. At her best, her comfortable feel and scratchy delivery evokes memories of jazz great Nancy King. Too often, though, the lackluster feel and blend of her backing tracks saps the energy right out of her lead lines.

The A Cappella Sessions is an ambitious effort, and it stands out enough from the contemporary a cappella crowd to be worth checking out. A cappella aficionados, however, may find themselves craving a little more than it provides.

According to her website, June Caravel is a multilingual "vocal explorer" who was inspired to give up her career with "traditional" songwriting to experiment with a cappella music after seeing Bobby McFerrin and Richard Bonna live in concert. I think this information is the key to understanding what to expect and what to take from The A Cappella Sessions. Without it, one might think that the album is sporadic, questionably tuned, and entirely too live-sounding (or under-produced). After knowing that Bobby McFerrin served as inspiration, the lack of stringent auto-tuning and notable dearth of compression and other common production tools are less troubling. This point of reference also allows Ms. Caravel to avoid comparisons to other solo multi-trackers like Peter Hollens and Mike Tompkins and focus more on the natural sound of a single person's voice layered upon itself — for better and for worse.

While Ms. Caravel does have a nice voice, there are many flaws with this natural sound. In fact, a solo voice layered on top of itself without any processing or tuning is an inherently unnatural sound, often sounding exposed, shaky, and tonally incongruent. A person's voice is also necessarily limited by range; on songs like Summertime and Sunday Morning, much of the low notes sag in pitch as they are clearly low (too low) in Caravel's range.

This album is not especially easy on the ears. As an album, it is not something that invites repeat listening, but there are some nice things happening here. Specifically, most of the album is original music, one of the biggest holes in the contemporary a cappella catalog. Even better, some of these originals are or could be good songs. You can hear how they would work as instrumentals, with a keyboard or guitar and sparse percussion, for example. The fatal flaw is one which strikes many newcomers to all-vocal music: arrangements. Many of the original tracks sound like they were composed on a keyboard or guitar and then hastily arranged for simplistic vocals. The more Ms. Caravel immerses herself in contemporary a cappella, however, the more likely she is to discover the importance and possibilities of smart, creative arranging. I would very much like to hear some of these songs re-arranged and re-recorded with other voices in the proper ranges, or, if Ms. Caravel insists, with her own voice and some enhancements in tuning and production.

Anyone who has sung a cappella in the past fifteen years and owns a computer has thought about multitracking his singing, maybe even recording an entire album of it. I suspect that for the vast majority of us, like Ms. Caravel, such an album would be special and compelling to few outside our circle of family or friends. Unlike the rest of us, however, Ms. Caravel seems to have a spark for songwriting, showing real promise on songs like Ceasefire and Some May Go. While I respect her decision to make a vocally bare album, in the vein of a Bobby McFerrin rather than than a highly processed approach, respect does not always correlate directly with enjoyment. Where she goes from here is anyone's guess, and while I'll be keeping an eye out, I probably won't be keeping an ear on this album.

You can order your signed copy of the CD at http://junecaravel.free.fr/theacappellasessions.html.