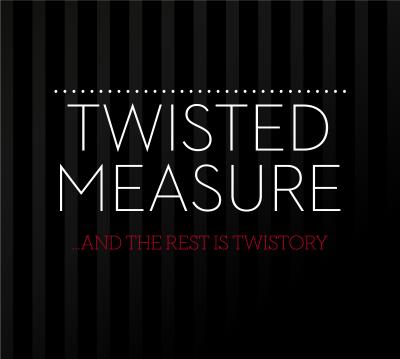 Twisted Measure's And the Rest is Twistory is easy to listen to; this Elon mixed group takes on contemporary pop songs with good tuning, blend, and soloists. But what separates this album from the best a cappella albums is that with Twistory, a listener will be acutely aware that this is an all-vocal album. Though often these arrangements sound like the group is trying to replicate the original too closely (Breakeven especially), where every note, phrasing, or dynamic turn of the original is carbon-copied onto the a cappella version.

Syllables are also a challenge here, with literal syllables ("doo", "dmm", "bah-dah", and so on) working to get the job done but often detracting from the soloist and from the overall flow of the song. In Just Haven't Met You Yet, there's an amazing amount of detail in the backing voices, but the different vocal lines sound as though they're competing with one another and with the soloist for the spotlight. The busy introduction of Secrets is equally distracting. Maybe that's just a mixing issue — taken a little bit lower in the mix, the detail of the backs wouldn't be quite as apparent — but sometimes it's difficult to figure out where to focus attention on these songs. Songs with a strong soloist fare a little better; on the first minute of What Turns You On, the sole focus is on Emily Mooney's stunning solo, leaving the syllables way in the background.

One awesome surprise on Twistory is the song Watch and See, written and soloed by group member Sam Gyllenhaal and arranged by group member Will Armour. It's a slow, smoldering ballad that fits in nicely with the rest of the group's repertoire. There are still some awkward syllables here ("shen", "shen-shen", "ahh"), but the song as a whole is a great addition to this album and to the collegiate a cappella canon.

As an aside, it's cool to note that every song on the album was arranged by a current or previous member of Twisted Measure; while these arrangements certainly aren't perfect, they do show a lot of promise for this group. These arrangers (and there are a lot of them!) are all able to write in a similar aesthetic, making the album sound cohesive despite having so many contributors. That's definitely something that many groups can't achieve, so it's a good foundation for Twisted Measure to start with as it works to fine-tune the nuances of its songs going forward.

And the Rest is Twistory by Twisted Measure has some hits and some misses. Hate on Me and What Turns You On are worth checking out for their awesome solos. Secrets really jams out in the choruses. Watch and See is an interesting original song. And Mean is a lot of fun to listen to. But several of the other songs have been covered many times, and often a lot better than this; Twisted Measure doesn't bring much that's new to these songs.

There are a lot of careless sounds on this album. The very first track Use Somebody opens with the sound of highly processed girls in the backs which return every chorus. And the guitar solo is on a nasal "neh". I don't understand why sounding like a guitar was prioritized over a sound that is pleasant; it is out of place because the rest of the arrangement is so warm and tastefully executed. The arpeggios in Secrets are highly auto-tuned to the point of discomfort. The original trumpet solo in Just Haven't Met You Yet is transcribed and given to the sopranos in the original octave on "ah" with no timbral alterations. It's an awkward line to sing, especially in that octave. The opening and after every chorus of Just Haven't Met You Yet features a weirdly stylized scoopy "bah dah dap". I don't know what it's trying to be, but it just sounds lazy. None of these sounds should have passed quality control; these are easy fixes with a little extra attention.

The first verse of Breakeven features a two bar hocket between two men that is looped through most of the song. Devastatingly, this loop is a little off rhythmically. Not by much, but when you loop it for three minutes, it makes the whole song feel a little unsettling. This part is the foundation for the entire song — except for the chorus, it loops continuously. So getting an excellent take of these two bars should have been a priority for recording this song. If this was the cleanest they could sing it, the part should have been rewritten. It's a very simple idea but is made needlessly complicated by breaking the line up into two voices. It would be easy for one person to sing cleanly, and it would have dramatically improved the track.

Just Haven't Met You Yet is not enjoyable to listen to because the soloist and arrangement are square and hokey.

Next is Watch and See, a song written and soloed by one member of Twisted Measure and arranged by another. The melody and soloist are really great, but the lyrics are weak. The song is about a man eager to reassure his overwhelmed friend with clichés and vague metaphors. The arrangement is built around three beautiful open chords. This is a great starting point, but the entire arrangement is homophonic. There is no texture and no contrast. Pretty melody and pretty chords, but I wish the song had more musical and lyrical substance.

I really want to love Secrets, but the sad truth is that while the chorus is awesome, I can't get over the tasteless "veh neh"s that dominate the track. They are abrasive and prevent me from really enjoying the track. Honestly I would probably love this track if the "veh neh"s were light "doo"s. Or if it was just the chorus like five times.

Inconsistent backs are not a deal breaker because of above average leads, but I can't help feeling disappointed that these talented soloists didn't end up with a better finished product.

Sufferin' Succotash! Such a smorgasbord of syllables. Captured so cleanly and crafted so carefully, it's easy to get caught up in the charisma of Twisted Measure. When you get a spread like And the Rest is Twistory, it can be fruitful to inspect the ingredients for what exactly it is that strikes or doesn't strike your fancy. Shall we?

"VE NE NE, VE NE NE, VE NE!" I was not terribly excited to hear the umpteenth a cappella cover of Use Somebody open this album. Fortunately the mellow "gong gong" verses balance out the harshness of the "VE NE" choruses, and the performance and production are tight enough to make this one of the better covers out there. Strangely, arranger Armour chose to use the same aggressive "VE NE VE NE" to imitate the ominous strings in Secrets that Fiander used for whiny electric guitar in Use Somebody. Except that with all the giddy syllable play, Secrets is anything but ominous. Suffice to say that after these two songs it will be a while before I try another "VE NE" in my soup.

"Ohhhhhh GENT!" The soft "g" (or hard "j") is exquisite in What Turns You On. Sharp enough to accentuate the melody, yet seductive enough to glide along with the powerful performance of soloist Emily Mooney. The same sound makes a more rambunctious appearance in the "jen"s of Mean. "Jen" is by no means a twangy syllable, especially when you try to slide up the "nnnnn", and as a result the song loses its country charm. Instead, Whitaker opts for what Twisted Measure does best and delivers a polyrhythmic pop crowd-pleaser. Smooth or snappy, a serving of "jen" can fit in any number of dishes.

"Ba da ba, da na na": the meat and potatoes of a cappella. It's featured prominently in Breakeven, Just Haven't Met You Yet, and All These Things That I've Done, and stirred in throughout the bass lines of every other track on the album. Usually safe, but applied too thickly (as in Just Haven't Met You Yet) can sound incredibly corny. For these reasons I was glad to hear Armour try out "shen" in his original composition Watch and See. "Ba da"s and "da na"s will probably always find their way into arrangements, but something spicy is necessary to make the arrangement stand out.

I applaud the syllabic experimentation Twisted Measure brings to the table. The group has talented soloists, knows how to use rhythmic complexity, and collaborates well with the producers at Liquid 5th. What Twisted Measure needs is some diversity in its repertoire. Spunky syllables lend some personality to arrangements that have been overplayed on the radio and pasteurized into peppy pop on this album. But take away the creative syllables, as in The Chain and Hate on Me, and all you have are vanilla chord changes. This may not be fine dining, but if you just want something vibrant and nicely packaged to snack on, check out And the Rest is Twistory. Bon appetit!

To order this album, visit iTunes or the group's web site.