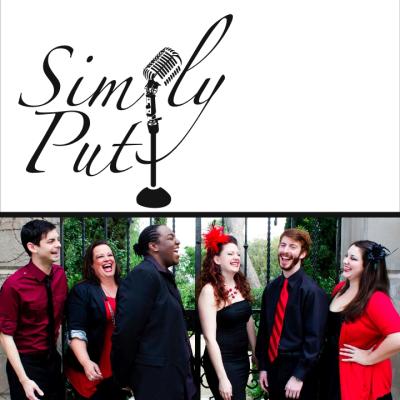 A cappella fans who are used to hearing the rich, full sound of most contemporary a cappella (whether achieved in-studio by multitracking or via the sheer size of many groups) will find the sound on Simply Put's debut album Simply Put to be a little thin. But these six singers have a strong showing here of jazz-influenced arrangements of contemporary songs.

Simply Put's size certainly puts an interesting spin on these arrangements: Killing Me Softly has an intriguing jazzy flair that keeps the spotlight on soloist Marisa Esposito. It's a memorable arrangement, although I don't like the instrumental "whoa"s and "la-la"s that close out the song's final minute.

Ultimately, the group shines best on its jazziest numbers; Sir Duke and Neon are two of the most memorable songs on the album. Neon in particular alternates between choruses with fast-paced backing voices and verses with a sparser, more haunting arrangement. The group does such a great job with Love Song, capturing the energy of the original without being a literal transcription. More repetitive arrangements, such as Rocksteady, don't fare as well, and I find that Somewhere Over The Rainbow doesn't really fit in with the rest of the songs on this album (the backs do a great job with it, but I'm not a huge fan of switching soloists in different sections). Zero to Hero ends the album with a bit of a whimper when the group showed itself capable of a bang. Still, for a debut album, Simply Put shows off the strength of the group's voices and arrangements; all ten songs here were arranged either by bass Loren Smith or by baritone/vocal percussionist David Stal. Finally, the group does a great job of crediting songwriters in its liner notes; it's refreshing to see a group give credit to the composers who wrote the songs covered here.

Note: As of this writing, Simply Put has a message on its web site stating that the group's members have parted ways. I wish these singers luck in their new endeavors going forward!

The soloists sometimes falter. There are awkward moments in a few of the arrangements. Overall, though, I don't want to stop coming back to Simply Put. The singers' vocal homages to classic tunes and jazzy re-workings of popular songs sound so natural that each listen feels organic. Any vocal shortcomings take a backseat to confidence, and it makes all the difference. If you sing with the belief that you're a great vocalist, your argument just got that much more convincing — and Simply Put has me convinced.

In an a cappella landscape littered with collegiate albums made of "jin" and "jodo", it's refreshing to hear something different. Simply Put mostly nails it, but the group's interpretation of Imogen Heap's Hide and Seek is a bit of a head-scratcher. Former RARB coordinator Benjamin Stevens once made the point that song covers should serve to showcase something that the original did not; to make something that even the original artist would agree was better. I'm not sure that is achieved with Simply Put's interesting take on Hide and Seek. Different is preferable, but not when it's just for the sake of being different.

Fortunately, that's not enough to take away from this overall win. Simply Put won't soon be winning any awards for pioneering a new style of arranging or discovering a groundbreaking recording technique. But if you want to hear fun a cappella covers sung well, you should pick up a copy of this album. It's sure to be a smile-inducing addition to your collection.

The vast majority of a cappella albums released today are marked by a common style which can best be described as: tuned to the hilt, produced to the max, and sang with little character and enthusiasm.

Simply Put's eponymous album turns this paradigm on its head, offering instead a very live, au naturale collection of good old fashioned sangin'. Simply Put exhibits a group of stylish, jazzy arrangements of various pop tunes and standards, performed with excitement and nuance, viewed through a lens of minimalist production.

Sounds great, right? Well, not exactly, because the problem is, while the singing is great, the record doesn't exactly sound great. Perhaps the problem is one of relativism, with albums from professional down through high school now sounding tight, slick, and radio-ready (from a production standpoint, if not a talent standpoint). Reverb, compression, and EQ are not just words that engineers like to throw around to sound important — they are crucial tools which were underutilized or mismanaged on this album.

All that being said, I really like this album a lot, especially considering the sonic deficiencies. It may well be that Simply Put intentionally avoided a heavy production hand to demonstrate its commitment to great singing. The members might well be saying "It sounds the way it sounds when we sing it, and we sing it well." I respect this, and I wouldn't disagree with this statement if Simply Put put it all over the album notes.

Simply Put features an awful lot of great singing, especially from the ladies. Marisa Esposito, complemented nicely by Andi Gibson and Melissa Stewart on the intro of Killing Me Softly, is a highlight of the album, and these voices also shine in different ways on Love Song and Hide and Seek. The opening, Soundcheck, is a fun showcase for the various talents that the group will show off as the album progresses.

The arrangements are smart, engaging, and quite successful in taking songs from different ends of the pop and standards spectrum and making them sound like Simply Put. In some cases, they are dramatic reinventions, in others they are simply tweaked to fit the group's strengths. Luckily, Simply Put has a terrific sense of its own jazzy style and capabilities. Warm, sinewy chord sounds weave their way through Killing Me Softly, Hide and Seek, and of course the Voices Only Forte-selected track Somewhere Over The Rainbow.

Simply Put's website says the group is no longer together, which is a shame. This album shows that this group had the heart, skill, and insight to put together smart arrangements and committed performances. If the production had heightened, rather than detracted from these factors, this might well be a top album. Nevertheless, it's worth adding to your collection as a reminder of what could have been — in more ways than one. Plus, it's a lot of fun to hear real singing every once in a while.