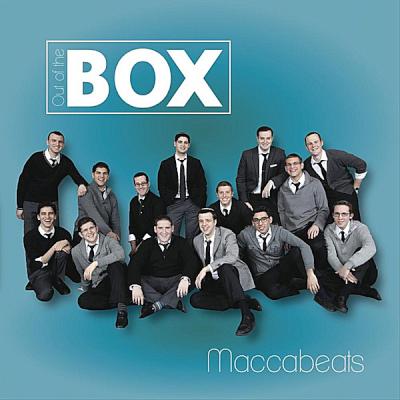 The Maccabeats are probably best known for their Hanukkah-themed parody video of Dynamite, boasting over 7 million hits on YouTube. On the group's latest release, Out of The Box, this fourteen-man Jewish group departs from its comedic claim to fame and presents a serious collection of ballads and slow grooves to mixed success.

Never Say Never, Miracle, Yavo, Come Back, and Keep Your Head Up are one part soft rock and one part Owl City synth pop, a combination that feels natural for these reedy voices. These tracks lilt as much as rock, and when added to the litany of ballads (Keshehalev Bocheh (Shema Yisrael), When You Believe, Modim, Habeit and Kol Berama), the Maccabeats' sound falls somewhere between mellow and sleepy. In fairness, going from lighthearted parody to emotional transcendence is about as far as the pendulum will swing. Simply put, ballads are tough. When they make up over half an album, there's a musical mountain to climb. While there are moments within almost every song when the Maccabeats achieve excellence, maintaining that level throughout these challenging ballads proves too daunting a task.

Arranging and production lie in the perfect sweet spot of enhancing without distracting, and this sets the leads up to dominate the impact of each song. Where those leads excel at their challenges, the song rises. Where the leads must stretch to meet the song's demands, we root for them, but aren't quite swept away.

The Maccabeats and their designer, Rivie Shalev, do an absolutely terrific job with the liner notes, capturing the essence of the group in a fun, lighthearted, colorful way, providing complete, rich credits, dedications, thank yous, contact information, and even take full advantage of technology like Twitter, Facebook, and QR codes. Full disclosure: the QR code led my iPhone to a 404 error page on their site. But aside from that technical snafu, groups would do well to mimic liner notes as well crafted as these.

The Maccabeats have a tour schedule and fan base that are nothing less than astronomical considering their extremely recent formation. Though this album isn't likely to propel the group to even greater heights, neither will it dampen their prior successes. This isn't a must-own for the typical cappella collector, but for fans of this New York-based group, the eleven tracks comprising Out of The Box will be a welcome addition to their growing Maccabeats collection.

The world of Jewish a cappella is one I can't say I'm intimately familiar with, but there's enough fresh and interesting material on The Maccabeats' well-formed album Out of The Box to prompt a closer listen. Tight harmonies, strong soloists, and interesting song choices definitely elevate Out of The Box above your standard collegiate fare.

Out of The Box functions remarkably well as a complete package; the strong song placement allows for smooth transitioning from tune to tune, and there are few moments that jar or disturb the listener's enjoyment. The album also strikes a nice balance between mainstream pop, Jewish pop, and songs that straddle the line.

Production is appropriately modern, with the studio bells and whistles allowing for the group to pop out when needed and then retreat under the soloist when their moment is over. The production techniques used are never excessively flashy or embarrassingly overbearing, and because of this the album has a sparkly, bright texture that suits the language and the timbre of the vocals.

Though The Maccabeats are consistently solid on the album, I was struck by the lack of any "gotcha" moments: moments that jump out at the listener. As a result, the album settles into a bit of a rut after a while — everything's strong and well-sung, but there's nothing exemplary or exceptional to arouse the audience's attention.

Fans of Jewish a cappella have probably already checked out Out of The Box, but those who are looking for a primer could certainly start here. Out of The Box is a strong, energetic and focused release, and The Maccabeats are very much a group to watch.

Out of The Box is really anything but. Nothing about it strikes me as incredibly innovative or unique. That said, it's still a really enjoyable listen. The sound is clean, sonorous, and consistent throughout. It's a bit surprising, since it seems like almost every engineer in the business contributed to this album. The arranging — provided in part by Deke Sharon, Mike Boxer, Tom Anderson, and other industry pros — leaves nothing to be desired. Above all, this is what makes Out of The Box an enjoyable listen for all, not just those of the Jewish faith.

There's no denying the Maccabeats are a talented bunch. When everything locks in, they have an absolutely beautiful group sound and an incredible range. Kol Berama pulls at the listener's heart, while Keep Your Head Up has the energy it needs to inspire toe tapping. The soloists sound vocally aware, and most of them are highly believable. A nice blend is often achieved, though some tracks — like Miracle — could use a tad more bass. These offerings might not be out of the box, but they sure are appreciated.

I have to give props to the Maccabeats for understanding that a small town Catholic girl might end up listening to their album and need Hebrew translations. I'm even more impressed that they're given to the listener by way of a QR code in the liner notes. A+ use of current technology. The liner notes as a whole are clean, stylish, easy to read, and informative. I can't overstate the importance of this. It's the cherry on top of a satisfying hot fudge sundae of an album.

If you're looking for a dynamic listen that will leave you humming for hours, Out of The Box is it. It's not breaking any new ground, but it sure does sound good.