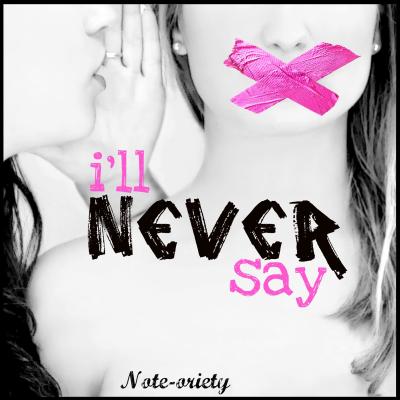 Note-oriety from James Madison University has produced a pleasant album with I'll Never Say. At times, it's a really good listen and packed with fun, but unfortunately, it is also a bit cliché. All of the songs are really pretty and the ladies sing like women who've been performing together for a while. The blend is what you would expect from a top-tier female group and each section seems to understand intrinsically when its particular part should be emphasized in the block and the mix (yay for no screeching sopranos or overextended and exposed basses). So all of the basic fundamentals are readily apparent.

The intangibles are what keeps the album from being stellar. The primary culprit is the vanilla approach to the entire project. Everything is just so safe and is about as engaging and creative as a milquetoast. Most arrangements are lackluster. Even my favorite track on the album, Pocketbook, is simply a faithful transcription of the original.

The biggest cliché is the repertoire. Anyone could look at the tracklist and stamp this album as a collegiate female recording without listening to one note. Tracks by Adele (TWO OF THEM), V V Brown, A Fine Frenzy, Imogen Heap, Carrie Underwood, and Ingrid Michaelson are the hallmarks of contemporary female groups, and they are featured prominently on this album. Even the inclusion of Bruno Mars' Grenade (so very reminiscent of Delilah's version) and Maroon 5 are not enough to make the sounds and songs on I'll Never Say at all risk-taking or innovative. I'm glad Note-oriety was able to produce an album, but I really wish these women had at least indicated the proper crediting and licensing payments in the packaging somewhere.

There are moments that really make the album soar though, like the rollicking Pocketbook! I wasn't familiar with the original, but this track jumped out at me as soon as the first beat dropped. The rap section is a highlight the first few listens ... just as ludicrous as Luda's. The angelic Almost Lover has a haunting lilt that conveys emotion with honesty and depth. But it is truly Addie Balser's solo on the mesmerizing Turning Tables that is the pièce de résistance from a vocal standpoint. She adds such a creamy overlay to the swirling background vocals.

A few of the songs just don't work. The lack of atmospheric processing on Earth is perplexing. (Never in my wildest dreams would I have thought that a high school version of a song would become the iconic version of which all other recordings and performances would be judged. Note-oriety's version doesn't even begin to compare to Durham Academy XIV Hours' rendition.) Little White Church has no grit, but other than Pocketbook there really isn't anything else to use as a closer for the album, which hurts the track's enjoyment. And Stutter? Oh man. Adam Levine brings the sexy with his music; this version comes across more as a Sorority bid day performance on my much missed and beloved TV show Greek.

I'll Never Say is an enjoyable, non-taxing album to listen to. Not amazing, not terrible. If it is streaming somewhere, take that as a preferred option. Or better yet go catch these ladies in concert, as they're a great group live.

If I could describe I'll Never Say in one word, it would undoubtedly be "nice". The ladies of JMU's Note-oriety are good singers. Their arrangements are pleasant, and there is nothing particularly perturbing about their sound. Unfortunately, that's not enough to produce a stellar a cappella album these days. Lackluster soloists, run-of-the-mill covers, and spotty engineering make this one average across the board.

Solos are far and away the biggest setback here, for several reasons. I'll be the first to admit that I don't know enough about the technical aspects of engineering to identify specific missteps, but the solos sound raw and separate from the rest of the group. The intertwining of solo and backs that makes for so many "wow!" moments in a cappella is not present. It often sounds like the soloist is singing in a different room from the rest of the group. I can almost visualize a lone singer standing at the front of the stage with the group in an arc set far, far back.

The engineering isn't the whole problem. I don't hear much besides "Here I am. I am singing," in most of the leads. What's more, some soloists are audibly reaching for higher notes rather than descending lightly on top of them. Grenade and Cowboy Casanova are both good examples of this. This is just another reason why it's so important to choose songs based on the singers in your group. None of these singers are untalented — in fact, quite the contrary. However, these song choices just don't show off the group's best vocal assets.

More on song choices. In my opinion, these are all great songs — but do they work together to create one cohesive, meaningful project? Not really. And hey, I get it! It is way harder to create an album with a "vision" when you're a college group trying to cater to your peers, parents, and all of us grumpy, judgmental a cappella "experts" yelling at y'all to get off our lawns. But as an outsider, I wasn't really moved by I'll Never Say.

There are some moments that really shine. Little White Church has a fast-moving groove that makes you want to stomp your feet. Almost Lover is set in a jazzy sort of shuffle that brings out something new in the song. The vocal percussion, speaking, and other auxiliary sounds in Pocketbook are fun and full of 'tude. These and other little moments of brilliance make I'll Never Say worth at least one full listen.

I encourage the ladies of Note-oriety to spend some time thinking and talking about their vision as a group. In the end, that's what I'll Never Say is really missing: a little TLC and extra thought. Maybe they'll decide they're in this to have fun and make albums that will be fun for their peers and parents to listen to. Or maybe they'll decide they want to take a real shot at creating something meaningful and causing a stir in the a cappella community. They're talented enough that it'd be a pretty darn good shot.

Note-oriety's latest album I'll Never Say might've sounded impressive five or six years ago, and I mean that in the nicest way possible. There's nothing wrong with most of these tracks, and indeed, a few are interesting and powerful enough to be better than average. The production is solid, the arrangements are inoffensive, and the soloists are adequate (most of the time). But the bar for collegiate a cappella has been raised over the past few years, and "good enough", really isn't anymore. Now that great production and sound quality are the norm, groups need to push their creativity, arranging skills, and energy to make an outstanding album. Because of this, I'll Never Say falls into the mostly-for-fans category; nice, but there's little to make an uninitiated listener stand up and take notice.

There are still some bright spots, to be sure. Shark in the Water is unquestionably the highlight of the album, featuring a killer soloist, a driving beat, and a crackling intensity that builds to an awesome climax. Almost Lover is evocative and lovely, with some seriously low altos anchoring the song's bassline.

Unfortunately, the questionable moments outnumber the good ones. Having two Adele tunes on a thirteen-track album is a misstep; it's best just to pick the better one and cut the second. The rap in Pocketbook is too timid to be believable. Cowboy Casanova should've been arranged in a lower key to suit the soloist's voice, as she's really reaching uncomfortably for those high notes in the chorus. The backing chorus in Little White Church lacks spirit and is too "pretty", preventing the track from being as fun and rollicking as it could be.

Really, the main issue with I'll Never Say is that it's ordinary, with no crippling flaws but few moments of brilliance. If you're a fan of the group, you'll be pleased to have the album when you're in the mood for Note-oriety's version of these pop songs. But otherwise, it's nothing you haven't heard before. Next time, I encourage the ladies of Note-oriety to work to push past their comfort zone and take some risks. They've got the basics down; now it's time for them to create something unique and thrilling.

I'll Never Say is avaiilable on iTunes or from any Note-oriety member. Contact jmunotoriety@gmail.com for more information.