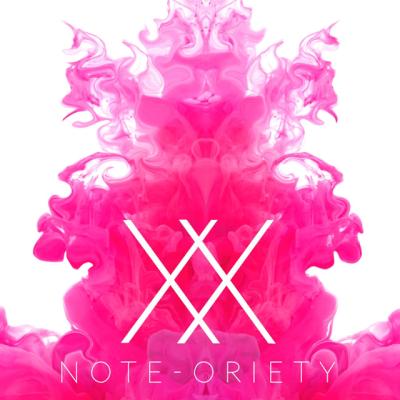 The women who make up JMU Note-Oriety are pretty-voiced singers. This is a good thing, but also a hindrance when it comes to the overall impact of the group's latest recording, XX. From the initial look at the tracklist and contemplating the meaning behind the title (hard-pressed not to think of it as "woman"), I thought the album was going to be full of gusty bravado chock-a-block with enthusiasm, grit and passion ... all the things that we've come to expect from the "girl-power" style (think their own Bang Bang or pretty much anything by Stiletta). Instead, we get some extremely well-sung, but pretty attempts at evocative songs. Not bad at all, but nowhere close to what I was expecting.

The album does have great bookends, though. Greedy is a little ditty of a number and sets a nice tone for the album. I get it: kinda fun and flirty, with just a hint of funky. Cool, cool. Nothing wrong with that at all — it's actually right up my alley and definitely in Note-Oriety's main wheelhouse. I'm adding Rise Up in the bookend comment because it does mark a different sound from the rest of the album in that it's really the only anthemic ballad on this release. I assumed that the group was going to provide a lot more tracks like this one, because the conviction is evident from the first downbeat of the backing vocals, the supportive arrangement, and the effortless solo. And the closing Don't Wake Me Up / Hurts has a floaty effervescence that later transitions into the balls-iest track on the album. My only quibble here goes back to my interpretation of the title. Ending an empowerment album with the lyric: "Baby, I'm not made of stone, it hurts, it hurts," confuses me. It doesn't make me like the track or the album any less, though; it's just a moment of "hmm".

As previously mentioned, Note-Oriety has great musicianship. You can actually hear natural dynamics. It's a bit unbelievable at times. What? Singers singing? A nouveau concept, apparently, in today's a cappella climate. Diction and articulation are excellent, though sometimes to the detriment of the song. I love the R&B Medley but that hard attack on the ending syllable in the opening lyric "All my lay-Dees" is slightly jarring and giggle-inducing. But the structure of the arrangement made up for all of it. The arrangement doesn't try to overlay these disparate songs into a complex story arc, instead just reminding us that the only person you can rely on is yourself. Other arrangements and tracks take a bit of dip in the middle of the album. Burning House is a bit too cornpone for inclusion on the album in my opinion, and You Go Down Smooth has too much empty space to be effective, and the rest is needly and prickly; everything you don't want if smoothness is the intent.

So, if your tastes are running along the subtle and tender trail at the moment, you will definitely enjoy the effort put forth by Note-Oriety. It's gentle and pretty. The next album has to be more raucous to show the depth of the group's skill that I know these singers possess. Swing wide, ladies, swing wide.

XX from JMU's Note-Oriety feels very familiar and comfortable. This is an all-female group that regularly gives us covers of pop/rock songs, and XX continues this tradition: a lot of these are recent radio hits; many of them have been covered by other a cappella groups; and one song was written by a famous a cappella group (Pentatonix's Cracked).

My biggest challenge with Note-Oriety is that I have always struggled to find what makes these singers unique as a group. It's not their repertoire, or their performances (which are always note-perfect but without a lot of dynamic range), or their arrangements — all of which are lovely, but there are dozens of other groups that also give me "lovely", and in a blind listening test, I couldn't tell them apart. These songs are good and often fun — Feel It Still moves along with a lovely bounce, Erin Few nails the solo line of The Cure, and Don't Wake Me Up / Hurts feels like a cohesive song rather than a mash-up (kudos to outside arranger Leif Jom for this arrangement).

But many of these songs blur together from one to the next — or even within the same song. Some songs feel so similar from verse to chorus to verse (You Go Down Smooth, Liar, Greedy) that it's easy to get lost within the song rather than traveling on the song's story arc. I would love to hear more dynamics or obvious changes within songs: more crescendos into final choruses, the addition of harmonies or other arrangement changes from one chorus to the next, and so on. For example, the various components of R&B Medley are jammed together like a radio channel set on "scan" rather than telling any kind of cohesive story, and that leaves me confused as to the selection and inclusion of this track.

There is obvious talent here; Sarah O'Connor's solo on Rise Up shows beautiful vocal control, and the group translates Cracked to an all-female register and soloist without sounding like anything's missing. I just wish I could hear something on XX that sets these singers apart from other all-female groups singing familiar contemporary pop songs. That said, if you like this repertoire, you will enjoy XX, since these singers do a great job with the material, and these tracks sound as smooth and glossy as the original songs.

Note-Oriety is back with its latest album, XX. The title, I assume, is a reference to the all-female nature of the group, although I'll resist the urge to delve into a deeper discussion about gender and chromosomal makeup. Either way, the album again provides Note-Oriety's standard fare, which is a strong collection of mostly-recent, mostly-female pop hits.

As was the case for me on the group's most recent (self-titled) album Note-Oriety, a decent chunk of this album is pretty much take-it-or-leave-it. There's nothing specifically wrong with many of the tracks, other than the lack of something extra to really make them stand out. The arrangements are fairly straight-forward adaptations of the source material, the soloists are well-suited to the songs, and there's not a huge amount of dynamic or expressive range. It's hard to fault Note-Oriety for what is primarily a consistent showing.

There are some numbers that break away a bit from the rest. Greedy, the opening track, features some nice moments that grab the listener: punctuating finger snaps, a spot-on key change, and good use of dynamics. There are some interesting background melodic elements that show up in tracks like Feel It Still and Burning House. I am also frequently impressed by the caliber of solo performances on Note-Oriety's recordings. Tackling almost exclusively heavy-duty female pop singers can sometimes be a big ask for collegiate female groups, but these ladies have a strength for choosing songs that are a great fit both for the group as a whole as well as the individual soloists. Erin Few (The Cure) and Sarah O'Connor (Rise Up) are both notable in my book, although I'd be hard-pressed to name a soloist I didn't like.

One track I expect might see some varying responses is the R&B Medley. Personally, it hits that sweet spot of fun and nostalgia that really works for me. It's not the type of mashup we usually give high marks to in these reviews, without a lot of deep thematic or lyrical meaning, or interesting contrasting messages and brainy arrangement moments. But it's the kind of track I could see showing up in a Pitch Perfect closing scene. It's fun, it's uplifting, the group obviously has a lot of fun performing it, and they sell it. It works.

I think ultimately that is one of the group's biggest strengths. Even when an arrangement starts to drag a bit, or the background syllabic choices are a bit cheesy, I find that these singers come out swinging with enough heart and sass and personality to win me over nonetheless.