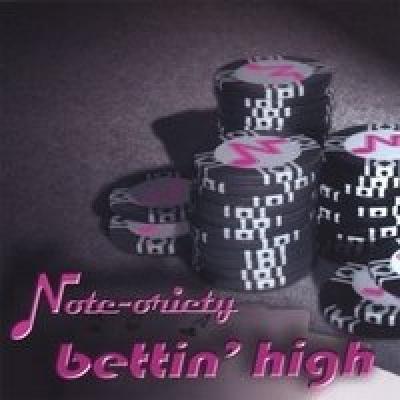 Note-oriety's Bettin' High is a solid, not stellar, new album in the realm of collegiate all female a cappella. With a few overdone, old classics (Walking on Broken Glass and Mr. Big Stuff) combined with fresh, new contemporary pop (Say It Right, Thinking Over), the album is a bit disjointed with what it hopes to achieve.

I rarely remark about packaging, but the only way one would know this group was from James Madison University is to refer to the thank yous in the liner notes ("JMU A Cappella" is mentioned). In addition, two names were missing on the list of members, noted by blank spaces where the name should be, and year of graduation floating alone. It's impossible to read the track listing, and though packaging is not the #1 reason someone purchases a CD, it's seems that very little thought was put into this album artwork.

The strongest arrangements are by outside arrangers, with the smooth grooves of Say It Right and The World You Love. They had the potential to truly be stand-outs on the album, but the percussion is too brassy and sounds like fuzzy static, and there are no dynamics. I despised the vocal percussion on this album; it detracted from the songs, sounded completely canned (the rest of the album had a more natural feel though full of post production), and when four women are listed as having done the VP on a track, it's evident the vocal percussion is not the group's strength.

This album has its high points and low points, and left me very puzzled on how to score the overall product. There are some great tracks (as mentioned above) and then some true lemons, like Walking On Broken Glass. This song is entirely overdone, was recorded at a tempo that was painstakingly slow, and I was bored after about 30 seconds of the listening to the track. Criminal is a cool, sultry song, and it felt empty, flat and awkward with chords missing notes and repetitive "bum bum" syllables. Mr. Big Stuff, other than a few nice trio chords from the soloists (with both Jonnelle Morris and Jenny Kneale making a second appearance), added nothing to the album.

There are some delightful soloists, like Jenny Kneale's sweet rendition of Thinking Over by Dana Glover, and Jonelle Morris' rich vocals on Bring Me Down. They are the highlights on the album, with the rest feeling more like a technical class on producing a cappella instead of an album with emotion, passion and personality. It simply didn't light my fire. James Gammon's production is excellent but understandably cannot produce emotion, but rather quantifies the singing to precise cutoffs, auto-tuning, and other usual techniques to make an album strong.

Note-oriety has a lot of potential. If they work on strengthening their arrangements, really listening to what the lyrics mean in each song and have arrangements reflect that, and stick to the modern songs that they excel on, they can produce a stellar album.

Bettin' High, courtesy of the all-female Note-oriety of James Madison University, is actually a pretty risk-free maneuver, a collection of eleven tasteful tracks that generally don't offend or inspire. The album is pleasant enough, but you can't win big money without putting a larger wager down — and Note-oriety tends to fold before the game gets serious.

Part of this stems from the generally solid but standard arranging work. A lot of the songs start nicely but fail to build or vary, and they begin to blend together over the course of the album. I'd love to hear Note-oriety arrange in a way that capitalizes more on the female group sound and infuses the songs with real emotional drama, as they did on the stellar tracks My Immortal and Wild Horses from their last album, Fusion. In the meantime, I'll take the moodiness of Say It Right and the textured verses of The World You Love as promising consolation prizes.

I generally liked the production, although it got a bit treble-heavy at times, which works on tracks like the shiny, bouncy Walking on Broken Glass, and less so on tracks like Criminal which sounds equally (and disjointedly) upbeat. And the tracklist could have pushed the creative envelope a bit more, in a way that didn't handicap the group's soloists (two Kelly Clarkson songs? C'mon, people.)

Yes, Bettin' High is eminently listenable if also unremarkable, which speaks more to the ever-increasing quality bar in collegiate recording than to any major faults in this group's work. Still I'd love to see Note-oriety put a few more chips down next time, and see if they can play with the high rollers already at the table.

James Madison University's female powerhouse group Note-oriety is betting high that its latest recording will catapult them into the upper echelon of collegiate a cappella. That bet nearly pays off with a royal flush, as Bettin' High is one of the most enjoyable albums that I've had the pleasure of listening to in months. It works extremely well as a piece of entertainment. Crisp, well-balanced, and energetic are just a few ways to describe the recording. The freshness of sound and richness of tone comes through the speakers and grabs onto your head, but more importantly your heart. You can feel the passion that these ladies have for the music they create.

The vocals have a sense of maturity and integrity — always a pleasure in female groups. The production doesn't try to hide the fact that these are women singing. Nor does it try to overinflate the capabilities of the singers. The CD brims with a natural quality that is very pleasing, without sounding too saccharine or yearbookish. While there is still that "sweetness" to Bettin' High that so hampered their last recording Fusion, it just doesn't grate on the same level. Like in Because of You, when soloist Hanna Easley sings "I cry in the middle of the night for the same damn thing" and the backing vocals mimic the same line a few beats later, I laughed. There wasn't an ounce of angst, bitterness or honesty in the performance. I would like to hear them be a little more gutsy and dirty. More Britney, less Mandy. (Did I really just say that?)

What doesn't work so well on Bettin' High are the same artistic pitfalls that trap a lot of other a cappella groups. There is a notable lack of dynamics and similarity of tempos. Everything seems sung at a mezzo-forte/andante — the de facto dynamic level and tempo for most groups. There are no great swells into a chorus or bridge; the background vocals don't make a discernable shift between or within verses, no liltingly soft passages that draw you into the song. And everything occurs at a walking space. Sometimes, it's walking with a bit of pep in the step such as You Thought Wrong while often it's like they are plodding along to a dirge Bring Me Down. 'Tis a shame, because of few of their songs would be masterpieces had the music directors paid attention to that kind of detail.

The clichéd song selection doesn't help matters either. Do I have before me yet another recording by a female group during the final years of the '00s with tracks like Walking on Broken Glass and Criminal? What? Really? I don't know how or when it happened, but I've come to totally loathe all covers of the dreck that is How to Save a Life. One could start by never recording this song again. Also, Note-oriety decided to record You Thought Wrong and Because of You. All the ladies needed to do was include a cover of Monica and Brandy's The Boy is Mine and they would have scored the trifecta of angst-riddled female relationships.

What about the arrangements? Maybe they should stop buying so many and focus more on developing the talent in the group. Yeah, that's my high horse and I'm riding it until the sun sets. The arrangements are solid — nothing extremely taxing or challenging to distract from the great solo work — especially Jenny Kneale's Thinking Over and Sway.

And just like last time, the bookending tracks are the best on the album. While the Maneater section of Say It Right is a bit pedestrian, the rest of the song is fairly scorching in its hotness. The breakdown in Sway is incredible. Jenny Nolte has some great vocal percussion tricks and the ladies seem to enjoy singing this song more than any other on the CD. There is some serious groove happening. Both of the tracks have excellent dance potential and movement. Not the hot and sweaty club bounce, but a more refined afternoon promenade. It works.

And so which wins out — entertainment or artistry — when making a judging decision? This time it's the entertainment factor. So Bettin' High got an overall rating of 4. I smile, bop my head and sing along to most of the album every time I pop it into my car stereo or crank up the volume at work. That accounts for something. Y'all were lucky this time.