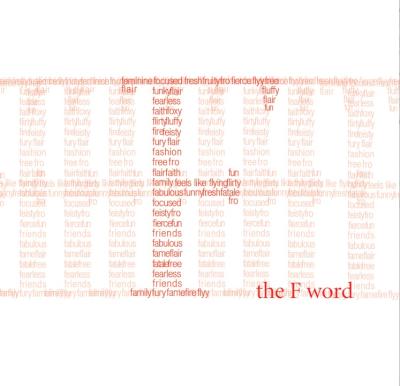 Of the myriad of "f"-words that appear on the cover of The Brown'sTones latest release, there is one most apropos word that appears to be missing: "flashback".

That's the word that came to mind the most often when listening to The F Word. This release features a fair amount of material that was dated when it was covered by a cappella groups ten years ago, features that material (and even newer selections) in arrangements that an octave pedal, effects and some sampling from Liquid 5th can't disguise as being painfully simplistic and uninteresting, and — despite a healthy number of very good solos — features performances that most often are rigid, mechanical, and either robbed of their energy and dynamics by the post-production processing or were devoid of them in the first place.

I realize this sounds terribly harsh and that having not recorded since 2007, The Brown'sTones, by the group's own admission in the liner notes, are "making up for lost time" by releasing a 16-track CD which almost inevitably has to feature weaker repertoire. But other than friends, family, and alumni, I'm just not sure what the market is for an album like this.

The oldies that are covered here have been done many times and in almost all cases, much better, including pretty much all of the material in the (count 'em) five medleys/mashups that sacrifice tempo and arranging creativity apparently just to tip us off that quite a few pop songs share similar chord progressions — something which I'm hoping doesn't come as a revelation to anyone. There's also a woefully misguided I Still Haven't Found What I'm Looking For where the recurring "JUH-minama-JUHminama-JUHmina-juh-MAH-na" syllable pattern is sung almost as a lead line with no effort made to fashion a unified sonic background against which the soloist can wail. And while the soulful Chantel Whittle does sing her guts out on Mary (Don't You Weep), the arrangement bears little resemblance to the harmonic complexity of the Take 6 original. The one exception on the older material is Mummers' Dance, which despite the repetitiveness of the song itself, is given a lovely treatment here, with a solid solo from Krutika Parasar.

As for the (somewhat) newer material, most of it doesn't fare much better, and is more often than not rendered as straight block chord backgrounds, lyric homophony, or mindnumbingly vertical arrangements that rely on a seemingly endless string of leaden quarter notes. Even when the arrangement isn't too bad, the performances and/or production (editing, tracking, compression) have a stilted, robotic drone that robs songs of any meaningful groove and takes popular favorites like Don't Stop Believin' and the sultry Buttons and spits them out as flat and lifeless.

As hinted at above, the one place the group has some real strength is in several of its soloists. There is the aforementioned Ms. Whittle, who was the Executive Producer of the album, and Ms. Parasar. But also deserving of recognition are Priyanka Chatterjee for I'm With You, Already Gone (in the Breakup Mashup) and Lady Marmalade, and Christina Santoro for a number of contributions as well. As is wont to happen, though, all of these ladies graduated last year.

When I reviewed The Brown'sTones 2002 release Femme Vox ten years ago, I urged them to find a good studio in which to record, with knowledgeable and capable producers/engineers. While I'm not enamored of all of the choices made by Liquid 5th here, the album has a polished, slick sound to it that is a vast improvement on Femme Vox. Unfortunately for The Brown'sTones, collegiate contemporary a cappella has come a long, long way in the intervening ten years — especially for all-female ensembles. What was passable, or even reasonably good back then, is weak and tired now. It seems like The Brown'sTones haven't really kept up, and indeed, they have some work to do if they hope to have a bright version of another "f"-word: Future.

Props to the Brown'sTones for absolutely packing their album with statement content — courageous hear-me-roar songs play abundantly on The F Word. And what a title, right? (Though while many "f"-words are presented on the cover for your perusal, like "feisty" and "fearless", that one didn't make the list). Unfortunately, the execution and energy is all over the board, giving us more meows than roars, and the vocal ability and stylings aren't consistently strong enough to pull off many of these ideas convincingly. Despite also landing on the cover, the big "f"-word that's missing the most from this vocal presentation is "focused".

Some will take issue with The F Word's length, but if everything were as compelling as Mummers' Dance, with its extra cool rhythmic foundation and driving movement/dynamics, it wouldn't be an issue, it'd be a blessing. So how to trim the fat? The Brown'sTones could not avoid the collegiate lure of medleys/mashups/combo plays, and five is just too many when more unexpected fare could be explored. However, at least these have clear unifying elements. Fall Out Boy Medley could have certainly been left for live shows, as it throws a harsh light on weak, bare-bones arranging, really weak drums that sound like sneezes or tsk-tsk noises, and soloist issues ranging from forced-sounding singing to intonation instability. The group's take on the Lady Gaga Mashup could have been left behind too, maybe as a stage encore piece, as there's not a lick original about this arrangement (really, "bear-nare-nare" and "meeeeee-ya" guitars?), and it needs a lot more finishing finesse to give proper respect to fill-the-spaces Mother Monster. Of the mashups, the Breakup Mashup is the strongest, especially the extra poppy, extra aching Already Gone.

The consistency of the energy levels, and the general way deliveries are handled are also problems, and I think these areas are oddly dependent on one another within The F Word. For most pop songs in the world, listeners hear major energy shifts during times of transition — softer on the verse, louder for the chorus, more intensity on the bridge. But here on The F Word, with so many vocal changes within each of these songs from the arrangers — multiple/numerous soloists are extremely common from the top of the track list to the bottom, and mashups and add-ins are nearly the norm — we're always in a state of transition! The result means songs can't just settle in and develop nicely, and the energy is lost/an afterthought in the constant change. Also, it's always one big extra bonus when all of the soloists are well-suited to their songs on an album. Here, it's rocky. One example: the lead on Buttons sounds absolutely adorable, like a kitten with a bow. Problem is, of course, that this is the Pussycat Dolls, and the original Buttons contains as much sexual tension as you can pack into one track (good lord, have you seen the chair work on the music video?; there's your inspiration, Brown'sTones).

Finally, despite all of this content, you won't see any songwriters/composers listed in the liners; just the performing artists the ladies cover. So the liner notes need work for the next go-around, too.

Sure, you'll like something on The F Word. But oh, we could have enjoyed it all with more song and arrangement focus, and of course, ever-more energy.

Manet said, "It is not enough to know your craft — you have to have feeling. Science is all very well, but for us imagination is worth far more." While the famous artist was speaking of portraiture, the sentiment certainly applies here. Technical accuracy aside, The F Word is hardly imaginative and lacks even an ounce of feeling. This album of favorites and guilty pleasures is likely only a hit among friends and family of the Brown'sTones. Unfortunately, in the greater world of collegiate a cappella recordings, it doesn't have a leg to stand on.

In different circumstances, a review of The F Word would touch on poor song choices and ineffective arrangements while still praising the group's intonation. It would go through the album's track list to highlight major successes and notable opportunities for improvement. On a basic level, that would be impossible to do for The F Word — sixteen tracks is a full-blown marathon. But on a larger scale, there's an overarching issue that needs to be addressed before any nuances: this is some of the most robotic singing I've ever heard.

If members of the Brown'sTones love to sing, you wouldn't know it by listening to this album. Nearly every track plods through straight rhythms at a lethargic pace, regardless of genre or tempo. There is no anger or frustration in Mama Who Bore Me, no angst in the Breakup Mashup, and there is certainly nothing sensual about Buttons. It's painful beyond being boring to listen to. Visions of frustration in the recording booth as singers strive to achieve technical perfection puncture the sound of nicely tuned backs. One can only assume that these songs were chosen because the group members enjoy listening to them — they owe it to themselves to try and enjoy singing them, too.

It's not enough to know your craft. All-female groups everywhere are breaking the mold by performing gender-bending tunes like the Fall Out Boy Medley. They're learning to embrace their sexuality and sing risqué songs like Buttons. Clever mashups like the Breakup Mashup that tie together songs with similar messages are always appreciated. None of it is worth a cent, though, if there's no feeling behind it.

The Brown'sTones seem like really fun girls. A look at their website finds photos of members dancing and laughing. Any group that has a song from Avril Lavigne's debut album in its repertoire has to have a sense of humor. As a former member of an all-female group myself, I'm certainly rooting for them to succeed. With that in mind, here's my message to these young women: stop sweating the small stuff and let your heart shine through in your singing. We want to hear what you have to say, so say it loud and proud and don't worry about looking foolish or botching the rhythm. The listener doesn't know what's written anyway. This is art — it's malleable. It's communicative. It's yours. Wear your heart on your sleeve. Everything else is secondary.