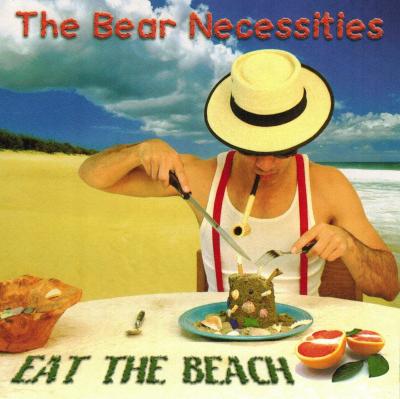 What I feel about Eat The Beach from the Bear Necessities is much the way I feel about many a mediocre musical that I've been subjected to seeing on Broadway in recent seasons. I know the people involved are talented. I know they care and believe in the work they're doing. I know they gave it their all. So why is the work so thoroughly ... well ..."blah", for lack of a better word?

If I thought this was an aberration — maybe this group just had a bad day/year — I might be more hopeful. But it's this same generic, run-of-the-mill, merely average a cappella music-making that typified Teaches of Peaches, which I reviewed more than three years ago, so I fear it may be something endemic to this group, and that's unfortunate.

To be honest, the track list gave me pause: a cheesy 70s classic (Carry On Wayward Son), an overdone 60s classic (The Letter), a wildly overdone spiritual (Swing Low, Sweet Chariot — credited oddly to the composer in this one case), and two songs originated by female leads (Jordin Sparks, Britney Spears) being covered by an all-male group. I was apprehensive and skeptical even before pushing "play", but I've been pleasantly surprised before so there was hope.

Sadly, Carry On Wayward Son was Carry On Wayward Son — a slavishly literal transcription down to the "Beow-now-now-NOW" guitar riff I was expecting but praying the group would do without. This version offers nothing in the way of innovation and very little even in the way of complexity. Other than the gimmick of solely using the human voice, there is no compelling reason for it to be a cappella. Ditto for I Thought She Knew, which might make a nice off-mic closer in concert, but brings absolutely nothing to the table that isn't found in the original.

Now before you yell and scream that the same can be said of a huge percentage of a cappella — especially on the collegiate level — let me pre-empt your protests. You're not necessarily wrong, but that doesn't excuse the behavior, and places like RARB need to call out groups who opt for boring, tried-and-true transcriptions without a shred of inventiveness or originality.

To be fair, the Bear Necessities do show signs of having some imagination in them. Swing Low, Sweet Chariot isn't so much of an arrangement as a string of arranging ideas loosely strung together, but once again, the re-invention and playfulness is refreshing. The jazz work in You've Made Me So Very Happy is appealing and builds nicely on the original. It's done in, unfortunately, by three issues that plague multiple songs on this album: syllables ("rim-wah"?), dynamics/balance (more notably, the utter lack thereof both in the singing and in the production by Liquid 5th), and mechanical, droning, energy-free backgrounds.

And while there are some scarce bright spots, there are far too many gross missteps: a Mulan tune that barely has an arrangement to speak of and just lies there like a dud; the most milquetoast version of a power rock anthem you've ever heard in Battlefield, and a misguided re-working of Stronger that left me scratching my head (and plugging my ears).

Even with all of this criticism, I do like these guys and on each of their last two releases, there have been a couple of "what if" moments that made me hopeful for what the group could accomplish with a bit more focus and refinement. That can be a tough order with the attrition of graduation and infrequent recordings but if the Bear Necessities can resist the cheese factor and challenge themselves a bit more in the music itself, I'll be interested to see what they come up with next.

This is all getting broken record-ish for our Brown Bears (or busted mp3-ish, if you'd rather). Like former releases, the Bear Necessities have an awfully hard time mustering up group energy, fall victim to plodding songs because of this intensity absence, and struggle to find powerful leads to up the interest. The group ends another album with a karaoke track (all the vocals minus the lead, so that you can wail to Kansas, should you desire), includes more harsh syllables throughout (like those "rim"s and "bear"s) that detract instead of nicely embellish, and the overall package for Eat The Beach just seems like a few steps back from where the majority of all-male groups are hanging out.

And yet, there's something very compelling going on within their oldies/classics genre. First, the energy just seems easier and more natural with songs like The Letter, a song that actually has a very fresh, enticing arrangement bubbling under it from start to finish that I enjoy very much. You've Made Me So Very Happy starts out with similar potential, this time with a captivating opening that sounds nearly dark (which is cool, given that it's a happy song and all), but man, drop in those garish syllables and it's a hard one to keep listening to. But then, wow: what awesome leads from Mike Williams and Matt Bauman on the crisp and sizzlin', foot-stompin' Swing Low, Sweet Chariot. Basically, with some refinement, I think the Bear Necessities could really make a name for themselves covering such older material. It certainly comes across more amicably than their newer covers, like the falsetto-rich I Thought She Knew, which sounds rather awkward and very timid from these mouths. The Brit-Brit mashup Stronger doesn't fare much better, because you just can't cover raunchy Ms. Spears in such a lackadaisical manner for so long before anything interesting happens and expect us to lift our lighters when the song comes to an end.

Additionally, like many of their collegiate brothers (and sisters), the Bear Necessities have thin liners that don't include the requisite songwriters/composers. It's just one more area that falls a bit short and could certainly use more attention on future releases.

If the gentlemen of the Bears Necessities could do one thing to bound forward, it'd be to find their inner swagger: a side of confident cool, a dash of energetic sexiness. Such vocal charisma has really become a requirement for lasting success in the all-male genre.

There is very little to get excited about on Eat The Beach. I already own better a cappella versions of many of these songs. There are very few bold song or arrangement choices or killer solos. And there aren't any moments that will wow you. But even so, I enjoyed listening to this album.

It starts with well-executed but very traditional takes on Carry On Wayward Son, Everything (by Michael Bublé), and Battlefield. I Thought She Knew is a beautiful song sung reasonably well here, but there is already a flawless recording of this arrangement with better soloists including the likes of Justin Timberlake. If you're not going to do anything different or sing it any better, what's the point of recording this song? I'll Make A Man Out Of You falls into the classic all-male recording trap: your best songs live, especially funny ones that rely on a visual element, won't necessarily translate well to a recording. I'm sure this had hilarious choreography live, but the focus here is on the subpar arrangement and vocals.

Then out of nowhere comes Stronger. The concept and arrangement are great. It's taken 20 bpm slower than the original, and this gives soloist Benjamin Freeman space to really show off his chops. The first minute is underwhelming, but starting in the second verse, Freeman gives the solo a lot more bite and carries the song to the end. This solo is sick. The best part of the entire album is the twenty seconds at the end when the vocal percussion kicks in. I wish I could listen to this groove for an entire song. The first section should have been shorter and the final section a lot longer, but even so I really like this song.

Like Stronger, You've Made Me So Very Happy takes a while to get good. It's usually best to start a song as close to the entrance of the solo as possible. This song has a lame and excessively long intro. If it was cut entirely, I would like the track. With it I have to resist the urge to skip the track for 45 seconds, and more often than not I don't make it that long.

The album ends with a "Bear-a-Oke" track, which is Carry On Wayward Son without the solo so we all have the opportunity to sing with the Bear Necessities and feel like rockstars. It's not a bad idea, but it makes the album feel less professional. I would have preferred that the group release this track somewhere else, perhaps for free on its web site. Further contributing to the amateurish feel of this album are the liner notes inaccuracies. Seth Kadish is listed as the arranger for I Thought She Knew, but transcribing a song that is already a cappella is not the same as arranging it; that credit belongs to Robin Wiley. And the original artist for I'll Make A Man Out Of You is not Mulan, neither the legandary Chinese figure nor the Disney movie; the song was written by Matthew Wilder and David Zippel and performed by Donny Osmond.

We are left with a standout track in Stronger and a totally solid album capable of scratching your all-male itch, so long as you haven't heard these songs covered too many times before. It's not one of the best all-male albums out there, but it's an enjoyable listen.

Order from the group's web site or contact the business manager at gavin_kramar at brown.edu.