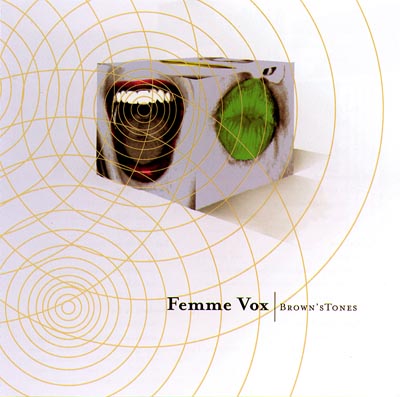 There's a good reason why engineers, mixers and producers like Gabe Rutman are in such demand these days in the collegiate a cappella ranks, and the Brown'sTones' fourth CD, Femme Vox, is proof positive of that reason. A cappella presents unique challenges for recording studios, and having personnel on staff who truly understand both the group being recorded and a cappella as an art form is essential to yielding a first-rate product.

We're not talking about pure sound quality; this CD sounds basically fine, although at least to this listener, there seem to be at least one or two audible either mic "pops" or instances in which someone may have bumped the mic. For me, that's the equivalent in film and TV of the boom operator allowing the mic to stray into the camera shot, and there's a reason those takes tend to end up on the blooper reel and not in the finished broadcast. The same should have been true here.

But more than that, the Brown'sTones need a producer or engineer who has some familiarity with the effects that are currently available to today's a cappella groups. Frankly, I'm startled that I find myself recommending vocal processing when I tend to prefer groups that can do more with less. But in an all-female pop group, there is a built-in biological hurdle which the ladies must overcome to create a full low-end sound. Plus, for groups that want to really rock out, be they male or female or mixed, there is the added challenge of generating heavy duty "kickin'" vocal percussion. On both of these fronts, the Brown'sTones fall short, and perhaps that's not entirely their fault.

The album is definitely treble-heavy and, with a couple of exceptions, does not allow the group's able altos to really anchor the sound. Unforgivable. If you're mixing women, there's no way two solid altos are going to balance a whole collection of mezzos and legit sopranos. Give the low end the boost it needs, dangnabbit!

What's more, the Brown'sTones love their vocal percussion, but the v.p.'s are not blessed with an inherent kick drum sound with any real oomph. Consequently, there is a palpable lack of backbeat on almost all of the tracks that feature v.p. At more than a few moments, it sounds as if you're hearing the arrangement with the bottom end muted because the low voices are mixed into oblivion and the v.p. is substituting a mid-range tom-tom sound for a heavy kick drum, thereby killing the rock feel of the song. Witness the transition into the chorus of Galileo and most of Crazy and Sweet Child O' Mine (a lackluster opening track) for evidence of the above. In short, give the ladies a kick drum — however processed it needs to be — and so much would be solved.

But not everything, mind you. There are a couple of choices on this album that can simply be considered poor. Their rendition of The Platters' Only You is a mistake, in my opinion — just uninteresting, unimaginatively arranged, halfheartedly performed and completely out of step with the rest of the album. Lebo M's Shadowland was another questionable selection given the v.p. problems described above. The soloist is enjoyable and the arrangement is a noble effort, but there were reasons why Lebo M was brought in on The Lion King (the source of this song), and one was his grasp of native African rhythms, which are not adequately reproduced here. Lastly, there is the improvisational sound symphony featured as the final and title track of the album. I'm not quite sure what the group hoped to demonstrate by what sounds like an attempt at the vocal equivalent of a drum circle, but simply put, you have to be extraordinarily talented both as individual musicians and as singers to make something like this work, and even then, its inclusion on an album is still a stretch even for such legendary groups as SoVoSó (whose improvisational For the Forest is on Truth and Other Stories). For the Brown'sTones, this was a case of pushing the envelope farther than it was meant to go.

The Brown'sTones have their moments, but in the end fall into the all-too-familiar all-female booby traps. Sweetness inappropriate to the song, hollow blocks, limp basses, and especially a disturbing lack of energy compromise the CD.

Dahvi Wilson is responsible for several highlights. On Sweet Child O' Mine and Nowhere to Go, she turns in two solos that show real inner fire, and contributes a solid composition with Turn Your Eyes. The Jig Is Up and Shadowlands have a folksy, feminine loveliness I enjoyed.

Unfortunately, serious missteps crop up mid-album. The adrenaline drains out of the group while the tuning and rhythms get shabby around the edges. Without some snap, crackle, and pop, songs like Crazy and The Boy Is Mine are nothing but repetitive, and not especially catchy, successions of chords.

Meanwhile, weaker soloists step to the mike, making hash out of relatively easy songs like Only You and Crazy. There's no shame in failing to match the orginal on, let's say, an Aretha Franklin or Bonnie Raitt cover. Britney Spears, on the other hand, is nothing but a great rack attached to a crappy-ass singer. Girls, you MUST out-sing her. You just don't have any choice. The last thing in the world you want the audience to be thinking about is how great Britney sounds compared to you.

The real heartbreaker on this disc is Water Is Wide. This could have been a showcase for the angelic blend that should be the treble ace-in-the-hole, but sloppy tuning turns it into an embarrassment.

My advice to the Brown'sTones is to take better advantage of the studio. Audition some new producers. If you've got one alto with a really butch bass range, bring her in for a solo session and let her add some extra layers. I got the feeling that you were trying to recreate your live sound, but there's no reason to accept the live balance limitations of female basses. Don't be afraid to crank up the bass and VP electronically if you need to.

I know how hard college groups work on every track, but I have to give Femme Vox a thumbs down.

I don't get cable in my apartment, and my rabbit ears broke a while ago. When I need to watch some Simpsons, I can handle the fuzz. I know each episode so well that I don't need to see it too clearly. But when NBA season rolls around, I start jonesing for a sharper picture. Femme Vox, the latest release from the Brown'sTones, is a bit like that. Their sound has a lot of fuzz, and it works for a limited number of tracks, leaving me wishing for more sharpness a lot of the time.

The blend of the Tones' block is quite good; the middle voices mesh together well, leaving the higher voices to flit about in the rafters. But there's this issue of the fuzz, which is a result of the girls' tones, the arrangements, the production, and the energy. The tone is unfocused, the arrangements capitalize on blend for texture, there's a solid amount of reverb, and the feel is very relaxed.

This recipe works really well for a track like The Jig Is Up, which has a very mellow, folky sound. The straightforward solo from Lauren Rubenzahl floats gently above a lightly rhythmic, chord-heavy background. It's quite nice. It works well enough for Galileo, too, which gets a boost in the energy department from a tempo which is faster than the collegiate norm for the tune.

But when the group tries tunes like Britney's Crazy or Melissa Etheridge's Nowhere to Go, the results are lackluster. The arrangements don't develop, and the sound isn't enough to support the edge that they're aiming for. It grates, too, when they add a "ber ner ner" sound to add edge. The sameness of Crazy leaves me little to do but ponder the lack of poppy hardness. The soloist on Nowhere to Go, Dahvi Wilson, does a really good job of going for the requisite angst, but the pretty fuzz in the background with a bit of guitar imitation doesn't help her out enough.

The soloists don't do enough to rescue the energy and focus of the disc. There are some pretty good turns (I already mentioned a couple, and should note that Dahvi Wilson also does a good job with Sweet Child O' Mine), but none are mind-blowing, and there are several that detract from the tracks. Sometimes stiff, nasal, muddy or unsupported, no solos on the disc really lift the quality of the track, with the single exception of Nowhere to Go.

After a sharp Where My Girls At to close the penultimate track, the girls surrender to the fuzz for some vocal improvisation on the title track. Like the majority of the disc, it's kind of pretty, but it just doesn't do much for me.

To order, visit the group's web site or send email to Brownstones@brown.edu.