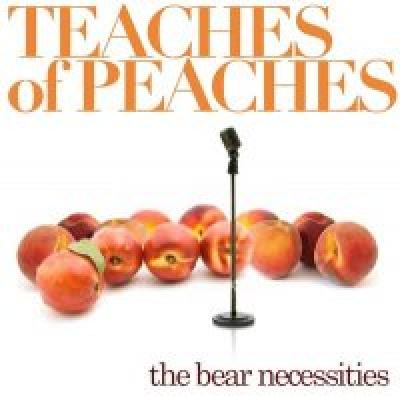 The Bear Necessities from Brown University have titled their latest CD Teaches of Peaches and lest you spend too much time trying to figure out why, they make it clear in the CD tray that they have no idea what it means either.

Unfortunately, the title and the inclusion of a karaoke backing track (more on that later) are pretty much the only interesting ideas you're likely to find on this smoothly recorded, serviceably performed, but otherwise pretty undistinguished album.

The biggest strike against these guys is a palpable lack of energy and feel for the material. It feels almost as though the Bear Necessities were one of those groups that developed as a small specialty ensemble that exists out of some sort of choral ensemble or perhaps a glee club. Not that choruses and glee clubs are energy-free, but it might explain the overly formal manner in which they approach a cappella syllables calling for even a hint of funky: "dumm-diggy-dum", "rim-rim-rotta", etc.. These sorts of syllables stick out like a sore thumb (especially when you're otherwise predominantly using "ooh"/"doo", "ah"/"bah" or word echoes) unless the singers grasp the inherent rhythmic and/or percussive feels they are intended to provide. Sadly, the Bear Necessities deliver their background syllables in a workmanlike, borderline robotic manner, almost like they might sound at a first read-down of a new arrangement where the singers don't yet appreciate what the arranger is trying to accomplish with certain consonant-vowel combinations and ignore the words just to be sure the notes are sung correctly. With the possible exception of the multiple guys featured in Fat Bottomed Girls and Federico Rodriguez in Signed, Sealed, Delivered (in the Stevie Wonder Medley), this extends into the solo work as well, with most soloists sounding way too legit/show tune-y/square for the material they are attempting to perform.

Not surprisingly then, the more successful songs are the more generically arranged. This doesn't make the interpretations particularly engaging, but with the aid of some glossy production from the boys at Liquid 5th, tracks like American Girl, Circle of Life and Zoot Suit Riot prove that the whole can be a good deal better than the sum of its relatively simplistic and unenergetically delivered parts.

The exception to all of this — i.e., the one place where the guys put it all together and which, by contrast, makes everything else so disappointing — is on John Mayer's No Such Thing which features a wonderful, layered treatment of the verses that only comes together into a more unison background at the chorus. The complex harmonies in the chord progressions come through beautifully and the VP, though sounding much more sampled than on the rest of the CD (and if it's not, more power to the uncredited VPer) is spot-on. In all, it's a terrific effort, and to the extent that anyone really would want to sing "a cappell-oke" or Bear-A-Oke with these gents, it's understandable why this was the track that was included.

Otherwise, there's not much here you'll need to re-visit anytime soon. The offerings from Coldplay, Dave Matthews, and Ben Folds all just kinda sit there. They're fair representations of the source material but there's very little imagination applied in translating them to a cappella, and there's a blandness to the performances that blurred them together in my head after more than one listen. Interstate Love Song almost feels like an a cappella oldie at this point, and though I enjoyed the nostalgia (Off the Beat covered it almost 15 years ago), and even found the background treatment of the verse somewhat fresh, the soloist's folksy/country shadings were bothersome and the overall energy level, or lack thereof, dragged everything down.

At a school like Brown, which already has a pretty rich a cappella tradition, it's always nice to see new groups taking shape and forging their own identities. But quite frankly, Teaches of Peaches is more of a "Bear" than a "Necessity" and these guys still have some ways to go before it's the other way around.

My, but the Bear Necessities know how to adhere to a graphical theme. If you are fond of peach imagery, the cover art alone is worth the price of admission. It's a peaches-everywhere scenario, visually speaking.

The music's just peachy, too. A bunch of friendly kids doin' their deal. A little Coldplay, a fistful of autotune, the "Masabenya Konichiwa" song from The Lion King. No big whoop. I like these guys.

It's a bit of a plodding affair, though. The Bear Necessities adhere to their plodding tempos with the same iron-fisted consistency as their graphic artist. I guess "laid back" comes with the territory for a group that's been working on their album since peaches were still ironic funny. Besides, it's Brown.

But sometimes you need a little more than some nice melodies and pretty voices. There's a lot of rock covers on this album, but not a lot of rock. The utterly neutral production doesn't do the Bear Necessities any favors in this regard.

It's certainly in tune, and it strikes me that this isn't just a product of studio work. These guys can sing, and for an album spanning several years, the overall sound is remarkably consistent.

The chill tempo does give us some time to embrace some nifty arrangement work. I like what Ray Sylvester does with Interstate Love Song (he turns in a nice solo as well), and the album includes one of the few arrangements of No Such Thing that nails the difficult build into the chorus. I could do without all the "bear-nair-nair" syllables, but maybe they are intended self-referentially.

The soloists are generally on top of the material, and occasionally exceed it. Michael Williams is a bit weird on American Girl, shouty and robotic at the same time. He can sing, but he can't sing that song. There's a lot of baritones in this group, and therefore a lot of baritone solos, with predictable results.

Except for the Stevie Wonder Medley, which, unpredictably, spans about four octaves (none of them Stevie's) in the first minute. Dudes, when you do the soulful 70s, high-pitched wail, do it just once, outside, away from the studio, and then come back and record once you've got it out of your system. It never sounds as good as you think it does. Ever. This is the shortest track on the album, and the worst.

Fortunately, the best track is the longest. White Shadows evokes nicely the sing-songy call and response of Coldplay's thematic riff. The Necessities navigate the original's various pivots and atmospheric flights of fancy, and Peter Cipparone doesn't fall into the trap of over-singing Chris Martin.

The album ends on a nice note. Unlike most collegiate live tracks, Philadelphia demonstrates the group can actually sing. Then we get the signature Bear-A-Oke dealio. I didn't really listen to it, but I'm glad they did it. Traditions are important.

So, do you want to buy Teaches of Peaches? I dunno. It blows the Jabberwocks' most recent effort out of the water, that's for sure. But there's an awful lot of nicely sung, all-male a cappella out there, and I'm not sure this transcends the genre. Maybe passion fruit next time, fellas? Star fruit?

The album is produced by Liquid 5th, but I don't ever feel like the Bear Necessities are leaning on the studio to fix them. Pretty natural effects, perhaps some gentle tuning, and the album comes out of the wash clean and smelling fresh.

Arrangements create an energy that suits most of the songs, especially Coldplay's White Shadows, and I don't even like Coldplay. They know when to throw in the block chord of "ahhs" and when to turn to the polyphonic rhythmic structure. They do the same thing on Dave Matthews' Where Are You Going, a song that most DMB fans will admit is not the band's best work. The Bears almost take it as a challenge to find a way to make you like the song, and it worked on me. It's nice to see a group that doesn't try to reinvent the wheel, but rather uses techniques tried and true since the inception of this style of collegiate a cappella. It's been awhile since a group has made me love a song that I'd normally turn off when it comes on the radio by the original artist.

On the flip-side, songs that should lend themselves to a cappella and already have energy (Zak And Sara and Zoot Suit Riot) fall flat. So, while the Bears do a nice job with the slow to mid-tempo songs, the faster songs don't fair as well as they plod along. It's Raining Men should be an opportunity to exploit a moment of humor on the album, but the lack of energy tells me they missed the chance to impress. Fat-Bottomed Girls suffers the same fate. They need to find a way to re-create the energy of the original artists on these songs or perform albums of only slow to mid-tempo songs.

Song choices force me to nod in agreement as the Bears pick songs they know will fit their sound on most of the album. Tom Petty, Dave Matthews, Ben Folds (geez, this Ben guy has been coming up more and more recently). Initially one might raise an eyebrow to Circle of Life, but it's not a misstep as the sound falls in line with the slow to mid-tempo songs they perform well.

Soloists are nice, but not great, and it's probably the weakest part of the album for the group. Mark Brown's rendition of Circle of Life is probably the only solo to pass muster on Teaches of Peaches.

The last tracks are a risk. First, you have the live track Streets of Philadelphia, which is okay as is the case with live tracks, but the sound doesn't measure up to the rest of the album. The last track is an encore performance of John Mayer's No Such Thing in karaoke style. I'm not kidding here. The Bear Necessities leave off the lead vocal and invite you to sing along. It's not a horrible idea, but I may have picked a more recognizable song to do this with. I don't dislike the idea, but some might.

Can I recommend Teaches of Peaches for purchase to the general a cappella community? No. Fans will enjoy, and the Bear Necessities can be proud of the product if their goal was to be slightly above average in comparison to the rest of the a cappella universe.