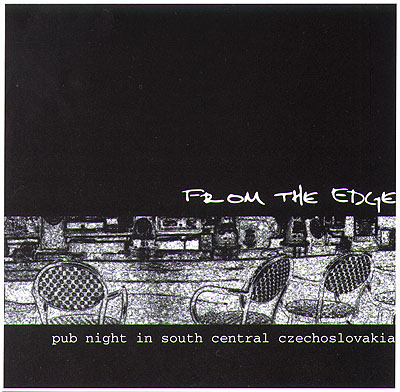 Independent film and a cappella make strange bedfellows, but it's good to know that there's a common spirit of grainy, grabby creativity. Pub Night in South Central Czechoslovakia plays like a black-and-white, low-budget attempt at the avant garde. Weird camera angles and deliberately amateur technical effects could be on purpose, could be mistakes, could be both. But like it, hate it or stunningly indifferent, there's always that spark of connection to somebody else's vision.

This album is art. Modern art, to be sure, maybe even post-modern. But it's going somewhere, it pulls and tugs and feels like somebody's vision, somebody's baby. Like it needed to be made for its own sake, not just as a demo or a collection of memories. I still am not quite sure whether I think it's a good vision or not, whether I think it's funky or pretentious or sloppy or fashionably out of focus. Intended effects aside, that makes me like it more. I like modern dance and modern music that wake me up and then leave me room to think.

Three guys in Canada — western Canada, cold and far from everything — get together and make this strange little recording. "Alternative" music, mostly covers but presented in a way to justify the adjective. There's some real hit and miss here — great percussion on Semi-Charmed Life under a weak solo, or a bizarrely sharp whistle overlay on an otherwise crisp and creative Joyride. There's some sweetly mainstream stuff, the aural equivalent of the cute guy with the big eyes who's the only believable movie-star type in the entire cast. Then there's the scruffier — dare I say sexier — lead, typified here by Drinking in LA and an assortment of off-kilter moments scattered throughout the rest.

I like Drinking in LA. I would buy it on CD if RARB hadn't sent it to me, which is saying something. I wouldn't have paid money for the last two m-pacts, for example, and they are a much "better" group. But to my ears, From the Edge is a much more compelling piece of work, in spite of — even because of — its visible flaws and seams.

I hear that in the end of credits of the movie The Crow there's a standard disclaimer saying that no animals where harmed in the production. Yeah, sure, no animals unless you count the Brandon Lee who was shot to death by what was supposed to be blanks.

The liner notes on Pub Night in South Central Czechoslovakia contain the standard "All sounds on this album were created by the human instrument.". Well, yeah, in a manner of speaking. But this album isn't about the purity of the human voice. Most of the voices on this album are being processed and distorted before they ever reach your ears. The sound is rather like a cheap synthesizer. I wonder why they don't just come out and announce it proudly. There's no shame in using such techniques. It gives the album a truly unique sound. Okay, it's a uniquely BAD sound, but in theory it could have worked.

The problem with Pub Night in South Central Czechoslovakia isn't the fact that it sounds like keyboards, it's the way they're being "played". Imagine Ben Folds pounding the shit out of his piano. This is the opposite of that. There's no attack on the notes. The production techniques ought to make for an exciting sound — instead it blurs all the melodies until they turn into a puddle of sound.

The actual singing on Pub Night in South Central Czechoslovakia doesn't help either. It's equally lifeless. When they let a single voice sing a backing melody without the processing you can hear how loose and sloppy the performances are. When you put the production and the singing together you get something that sounds, at best, like a demo tape someone made in their basement.

There is one nice thing I want to say (and it's not out of pity either). "Pub Night in South Central Czechoslovakia" is a freaking brilliant title for an album. It's so wonderfully cool and funny that I've tried to mention it as often as possible in this review even though I have a hard time spelling "Czechoslovakia".

From the Edge's Pub Night ... is a relatively consistent album, if nothing else: VP a la casio-tone, singing that's been autotuned so heavily that it sounds like robots harmonizing, and leads that for the most part lack both conviction and musicality. Yet, somehow... occasionally, this album actually sounds sort of ... good. Sometimes the electronica-pop choice of music (Somebody, Joyride) or the odd mood painted by the lyrics (Drinking in LA) verge on a kind of punk sensibility. It's an odd juxtaposition where the artificial and awkward singing evokes a hauntingly against-the-grain commentary conjuring images of mid-80s performance art. This is, of course, being generous.

Mostly Pub Night just sounds poorly sung and poorly engineered. The absolute abuse of the autotune effect and what appear to be very unnatural vocal samples is a constant distraction. The kicker is that while one would expect the entire album to be perfectly intonated considering these computer enhancements, it's just not. Pub Night's best use may actually be as a demonstration to audio engineers of the dangers of autotune and sample misuse.

Pub Night is at best an odd mix of synthetic-sounding elements and at worst an engineer's nightmare and a listener's quizzical disappointment. I'd say to skip this one.

The latest Canadian entry to the a cappella scene is the three-man outfit known as From the Edge. Armed with a dream, a vision, and one of the more unique CD titles, these guys deliver a ten-song set of pop/rock selections. This was one of the more frustrating CDs to review, and it took several listens before I could decide that it struck me as lukewarm. Especially since the positives and the negatives evened out the scales.

On the plus side, the vocal percussion was so good that I had to listen REALLY carefully to make sure that it wasn't a drum machine. Despite the standard disclaimer ("All sounds on this album were created by the human instrument"), at first listen I had to believe that they had borrowed fellow-Canucks The Nylons' drum machine. Whoever is doing the VP is doing a very good job. I also liked the arrangements, thorough and full. The backgrounds on each track left no unwanted dead air. The backing vocals were rich in detail, perhaps too much so.

One of the major deterrents to this CD is the solo efforts on each of the ten tracks. The only solo performance I truly liked was the guest vocal by Anna Beaumont on the first track (Drinking in LA). The rest of the solo efforts felt like they were trying to hit the notes without communicating, often leaving me with a hollow feeling. Granted this isn't Handel's Messiah we're talking about here, but still there is a need to sell the song, and it just didn't happen throughout the CD.

Lastly, there are a few cases where the basics were not cleaned up, whether they were noticed or the production costs were just too high, I don't know. However, there are a couple of tracks where it felt like there was a musical stutter, either the solo getting off beat, or rhythmic faux pas that just weren't cleaned up. (Somebody for instance got off track about halfway through.)

All totalled, Pub Night is not a CD I can recommend to the a cappella consumer as a BUY. It's a good progress marker for the group to build from, and I look forward to future efforts to see if it works out that way.

Would that I were reviewing this album ten years ago. Back then, a charming, simple group with pleasant enough voices and basic harmonies could stake their claim in the mainstream a cappella world. Had you heard Pub Night in South Central Czechoslovakia from Canadian group From the Edge a decade ago, you might have considered it an impressive debut from a group which clearly has potential. Disappointing then, that this album was released in 1999, when the boundaries and sophistication of a cappella music-making have been expanded beyond our wildest imaginations.

Make no mistake — what they do, they do quite well. The voices are, for the most part, resonant, able voices. The blend is coherent, if not quite seamless. The intonation, once again more often than not, is on target.

But what's been done with these voices is ultimately bland and uninteresting. The group seems to lack a legitimate bass which compromises its ability to create a full, rich sound. Only on a sweet, mellow song like Somebody do we get a taste for what a bass could bring to the group. The arrangements are almost identical, one to the next: a solo lead over two to three voices singing chords in identical rhythms over vocal percussion.

A note about the vocal percussion: it is, without question, the saving grace of the album. The percussion is crisp and varied with a wide selection of drums and other percussive sounds. It is always tasteful, and often sustains interest in a song whose arrangement may have caused the listener to tune out much sooner.

Back to the arrangements...consistently parallel movement in the background voices is frankly boring. Use of the same syllable repeatedly — "doo" or "bah" — makes them even less interesting. The soloists, while capable singers as noted above, lack energy, so covers like Third Eye Blind's Semi-Charmed Life are rendered flat and lifeless.

And from the "annoying" file — the track list on the back of the album is out of order. For your reference, Joyride is not the fourth song, but rather the eighth.

On the plus side, the exception to all of the above is From the Edge's cover of Sting's Fields of Gold. Here, the simplistic, chordal arrangement is well-suited to the material. The soloist's plaintive voice replicates the original quite nicely. The background rhythms, such as they are, are varied and overlapping to create texture. The percussion, as always, is understated and spot-on.

Unfortunately, the existence of a track like Fields of Gold on an album which I otherwise found so consistently "past its time", only leaves me further disheartened for what might have been if better use had been made of these promising voices.