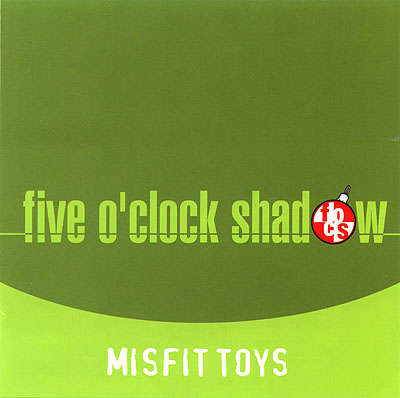 Impressive charge down the field for Boston's five o'clock shadow. But it's anyone's guess whether they'll be able to convert and finally get on the scoreboard.

Forgive the football analogy — it may be a stretch, but I think it's a good reference point with its associations of beer and babes and a big Nielsen share in fall and winter. Misfit Toys sounds to me like an all-out push for mainstream radio play, at least during the last months of the year. If there's any justice in the world, then it ought to work out for them.

It's no wonder FOCS has been so prolific in recent years — they need new demos all the time to reflect their current lineups. This EP suggests to me that they may be out of the woods a little bit — new percussionist Dave Stackhouse is a worthy successor to Wes Carroll, and the other singers have a common blend and uniform (and generic) poppy sound.

The originals that open this disk, the cute-n-catchy Watching the Tracks and the big hair, '80s-esque Santa Says Rock have the guts to stand up to the Backstreet Boys, Toad the Wet Sprocket or the latest from the Goo Goo Dolls. This strikes me as an odd goal to set for oneself, but some folks would much rather have airplay than critical acclaim.

This intellectual critic sees that, and wishes them well. But she is allergic to the Goo Goo Dolls, and so will likely not be around to hear five o'clock shadow either, should they finally make it to mainstream radio.

Did you sit on Santa's lap last Xmas? Did you wish that your favorite professional a cappella groups would learn how to write a pop song that doesn't sound like cookie-cutter top 40 drivel? Well then, I guess you've been good little boys and girls because Santa's got a little present for you: Five O'Clock Shadow's Xmas EP, Misfit Toys. Only two of the five cuts are written by group members, but the first one, Watching the Tracks is a big leap forward in terms of songwriting. The lyrics are actually fresh and articulate. It shows a lot of promise of what's to come from the group.

The second original song, Santa Says Rock, is either total crap or pure genius, but I can't figure out which. On the one hand, it might be a ludicrous heavy metal Christmas song, in which case it's so awful it's hysterical (in the worst sense). Or, on the other hand, it just might be a parody of every holiday rock song that missed the mark, in which case it's hysterical (in the best sense).

I should point out that there's a new vocal percussionist on this album. (They wouldn't be Five O'Clock Shadow if they didn't have a new VP.) His name is David Stackhouse. How does he affect the group? The biggest change doesn't have anything to do with his drumming, but rather his arranging. On Little Drummer Boy, he brings an entirely new sound to the group. It's unlike anything you've heard in a cappella before, but it's very much like something you've heard before: Rush. I've heard cover songs of Rush tunes that don't sound as much like Rush as this does. It's big and flashy and bombastic rock and roll. I think this is another step forward for FOCS.

It's a shame the production quality just isn't a little bit better. There's a lot of cool stuff going on in the mix and they get a nice, crunchy sound. They seem to particularly like making the bass lines buzz. But the levels often seem to be peaking, which adds an extra layer of distortion (of the unintentional variety).

five o'clock shadow has come back. With a new lineup of voices, they have put together a very interesting EP of Christmas songs that is full of their interesting style of fuzzy rock-pop (that is what I call it anyways). Misfit Toys starts off with two original tunes. The first one, Watching the Tracks I would say is my favorite. It has a great sound, and a hook that I couldn't get rid of. FOCS uses a lot of fuzz-box sounds to their guitar lines and other distortion that keeps things sounding a little less like plain a cappella. It is fun.

Santa Says Rock is a very interesting original that just seems to miss a bit. It is kind of corny, but it sounds pretty good anyhow. The vocal percussionist gets a chance to show off on the next song Little Drummer Boy and does a decent job. The other two songs, It's Christmas and Silent Night are very well done, with a good balanced sound and nice harmonies.

Some people may not like the sort of poppy sound that FOCS is known for, but then again they won't want to buy this anyhow. Hey, it is five Christmas songs. You can't go wrong with this little EP. It moves, it has a beat that you can dance to, and I give it an 80 Mr. Clark!

Well, kids, this ain't your father's Christmas album...not even a really older cousin's. Nope, this album has millennial Christmas rock written all over it. From the three originals to the two updated originals. From start to finish, it screams originality, and it succeeds quite well.

As it is a short album (typically EP length), these comments may be equally short. But it's hard to stretch out good comments. The very first track Watching the Tracks sets up the whole album about a kid's hope for the toy train he's always wanted to appear underneath the Christmas tree. Upbeat, pleasant, it captures that hope extremely well.

Santa Says Rock on the other hand has an '80s Guns N' Roses hard edge feel to it...let's just say this ain't gonna be one of your church's standards real soon.

All in all, nary a beat missed, nary a note missung, though I did wonder at the extra long vocal percussion solo in Little Drummer Boy. The originals will grow on you, and the standards are new once again. This EP of a CD is worth collecting come holiday season and putting into your five-disc rotation.

1999 seemed to be the year of the a cappella Christmas album. It seems every group decided this year to cash in on the holiday merchandising craze and throw something together to sell. Five O'Clock Shadow's (FOCS) offering is short (5 tracks), well produced and a little metal-heavy. I usually think of Christmas music as being cheerful, uplifting, and merry. There was a little too much distortion on this album to give me that feeling. Much of it really felt like a Christmas album from an eighties metal band. This is not necessarily a bad thing, it just depends on your taste.

Watching The Tracks, an original, sounded a little bass heavy (as much of the album did). The booming bass in this track was provided by guest Benni Chawes (formerly of Vox One and FOCS) and sounds great, just mixed a little too high. Santa Says Rock, another original, sounds way too eighties-metal-hair-band-y for my taste. If Spinal Tap had ever done a Christmas album, this track would have been on it. Little Drummer Boy is also a little too head-banger-metal for me. I can just picture guys of some band on stage, holding their guitars, long, curly locks hanging down, just slamming their heads when they sing "Pa-rum-bum-bum!" It's Christmas sounds nice, and has a merrier feel to it than earlier tracks. Silent Night started out being my favorite track off this album until they got to the section where the guitar solo comes in and then they lost me. It would have been wonderful without the guitar solo, not that it's bad, just felt out of place. Overall, not a bad album. It's quite short so I wouldn't pay any more than half the price of a regular CD for it.