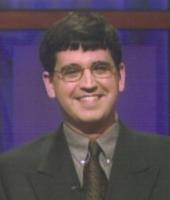 I graduated from Washington University in '94 with a BA in math and a minor in music, where I spent three years with the Chamber Choir, 1 year with the University Choir and a semester with the Jazz Ensemble. I also was Harry Paddington in the University's production of The Beggar's Opera.

Following college, I went active duty in the Air Force with my first assignment at Misawa, Japan. Now one would think that an assignment in Japan would effectively end any hope for a cappella dreams, but think again. In December '94, I became involved with a mixed Christian a cappella group called "Undivided" and spent over 1.5 years as a baritenor with them, occasionally directing them as well. We traveled quite a bit over Northern Japan singing for both service members on the base as well as the odd Japanese gig here and there (including a Christmas performance at the local Japanese mall). We were even invited to sing for 2 4-star generals, including the Chief of Staff of the Air Force. While at Misawa, I was also involved with the musicals Grease and Little Shop of Horrors, which I served as Vocal director as well.

Currently, I am stationed at RAF Mildenhall, UK, where I am steadfastly looking for a cappella outlets, and may have come across one... to be continued... ;)

69 total reviews including 11 reviews from before May 1998, which predate our database and are not listed here.