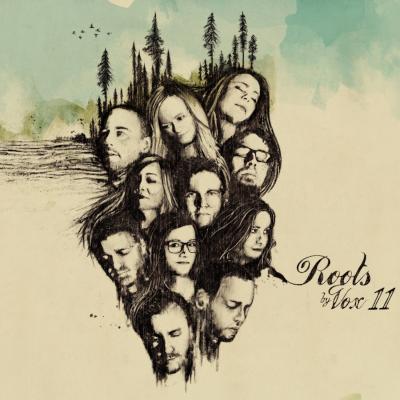 Vox 11 sounds full of youth on Roots, a likable album that roams between pop standards and artsier fare with easy aplomb. The group's eponymous eleven singers seem to be post-scholastic, but the energy here feels optimistic and forward-looking — even the tough songs sound sweet.

Sunday Bloody Sunday kind of works as a contemplative chick-singer ballad. Fix You just sounds muted and high school. But you wouldn't buy this disc for those songs anyway. You'd want it for the interesting bits, like Tit er jeg glad, where the group backs up a fabulous tenor soloist on loan from a classical group. When outside soloist Peter Lodahl starts singing, it makes you look up, like "hey, surely I would have noticed that voice earlier in the record by now." Nice voice, nice song. My other favorite is Vox 11's in-house arrangement of Drive My Car, which is dancey and post-McFerrin in all the best ways. Hum is fun, too.

Also there's original material, always exciting. Clouds and Captured Moments are pretty cool — the background guitarish vocal on the latter is a wonderful touch, by the way. Keep Calling didn't grab me, and I vacillate on It's Called Life — but really, we're spoiled for choice and it's really great to hear people showing off their own stuff. I feel obligated to give this group a "5" for originality, even though that lackluster Fix You is still hanging around like a cloud over my cartoon-character head.

Roots rounds out with some Scandinavian fare, which suits the group's timbre and personaity very well. En linedanser got my attention right away and Viola grew on me after a few spins. Danish groups like Vox 11 are making such great a cappella these days, and adding local fare tends to strengthen their advantage. Too many American pop standards and a European album can feel like a museum piece instead of a living, vibrant ensemble. I want to hear songs — even cover songs — that go places, not that strive to recreate some frozen a cappella archetype.

In sum, this is a very pleasant album that won't disappoint you if you buy it. I'm not sure it's compelling enough to justify the international postage, but the original material might be enough to tip the balance in Vox 11's favor.

Vox 11 is an eleven-member Danish mixed group with a very distinct sound. I myself don't really like this sound, unfortunately, but that's mainly a matter of taste and thus doesn't reflect in my scoring. But as a result, I can't really recommend Roots to you for purchase unless you first give the tracks a trial listen to decide if the style of music is for you.

To describe the sound: the group has eleven members, but often sings in just four-part harmony. Often there is one bass-ish part (low, but not too low), then three higher parts singing in close harmony. Sometimes there is vocal percussion, but often not. The overall effect is very light and airy; I was actually shocked to learn that the men outnumber the women in the group six to five. Judging from the album's audio only, I would have guessed the women outnumber the men perhaps seven to four or even eight to three. I can rarely hear more than two male parts singing together at the same time (plus a presumably male vocal percussionist). The higher parts are often doubled; the lower parts not as obviously so. Overall, it's just too breathy for my taste.

The songs alternate between male and female soloists. Some of the women soloists and duet partners have very pretty voices. Heidi Bisgaard Jondahl, the soloist in It's Called Life is the best on the album, and delivers a solo line comparable to what you'd hear from any slow pop song on the radio. (The song was also written and arranged by Ms. Jondahl.) Vox 11 should feature her more. The male soloists are less capable, with one of them (in Tit er jeg glad) having an effect on me that mimicked fingernails on a chalkboard. The only male soloist I thought was at all impressive was Jesper Albaek in Hum. Vox 11 should feature the male soloists less.

Roots is mostly in English, and the group's English is quite good and nearly accent free. Three of the songs are in Danish: the two obvious ones (looking at track titles), plus Viola. Some of the songs are ones I'm familiar with (Sunday Bloody Sunday, Drive My Car, Fix You), but most songs were new to me. Many of these are written and/or arranged by group members, which is a good thing — a cappella needs more of this.

Many of the arrangements on Roots seemed interesting when the song first started; however, the melodies and harmonies typically repeat themselves so I found myself getting bored by the end of some songs. The combined effect of repetitive harmonies with the light and airy sound almost put me asleep. Come to think of it, this would be a great album to listen to while falling asleep. And I think I'll leave the review with that thought — this is not what I personally look for in an a cappella album, but perhaps it's some others' cup of tea.

If you combine polished, contemporary music with a mellow ambient feel, you'll have Roots by Danish vocal group Vox 11.  This album showcases pristine, energetic performances of R&B, rock, and more with an easy-listening vibe. This dichotomy makes Roots a wonderfully refreshing listen.

Vox 11 does many things right on this album. From beginning to end, the group's dedication to excellence is evident. Every track, while very different from one another, flows smoothly from one to the next. What's most refreshing is the production. I love it when groups explore their sound using technology, but Vox 11 steers away from this trend for Roots. That's not to say that effects and studio tricks are not used, because they are. However, they are used sparingly and strategically. The tracks feel legitimate while giving the illusion of flawless live singing without much production.

I have to give props to Vox 11's musicianship. The performances are tasteful and filled with emotion. The arrangements are sensitive to genre; they don't sound repetitive, and are clearly tailored for the singers to maximize the soundscape.

The biggest problem with this album is that its mellow approach makes for a listening experience in which it's easy to let your mind drift to other things. You find that you have no idea how much time has passed or how many songs you've missed. It's like classical music to the lay. When alert, it's absolutely intriguing and you hear new layers each time. But if you're at all distracted or tired, it drifts into the background as beautiful but indistinct ambiance.

So Sick eases you into some sweet R&B right off the bat. It's Called Life is a gorgeous ballad; other songs that fit this description are Within My Reach, Captured Moments and Tit er jeg glad. I'm not a Beatles fan, but the group's rendition of Drive My Car is one of my favorite tracks on Roots. Fix You is a great song and is very well done, but it doesn't lock into the intensity of the original or the rest of the album. Sunday Bloody Sunday is probably the most different track of the lot. It's got a harder edge than anything else and the group effectively draws you in with some barely audible whispering at the beginning. In addition to the exquisite ballads, Vox 11 is quite adept at the mellow uplifting pieces. These include Keep Calling, En linedanser, and Viola.  For difficulty and execution, I have to give honorable mention to Clouds and Hum. These two are very different from one another, but are both crunchy and jazzy and have great builds in the arrangements.

Roots is a beautifully executed release, though easy to overlook when compared to the more dynamic albums out there.  However, if you slow down and appreciate the simple joys in life, Roots by Vox 11 should be on your list. I was charmed from start to finish. What a breath of fresh air!