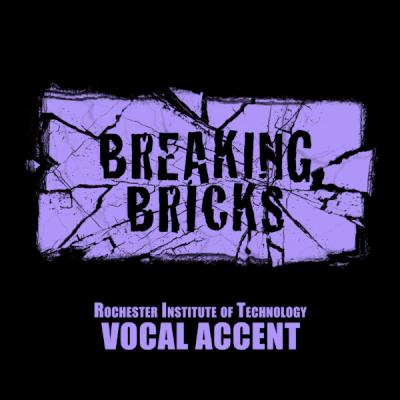 Vocal Accent is a relatively new group on RIT's campus; the all-female group was formed in 2009, and Breaking Bricks is its first EP. It's certainly solid as a first recording: I've written here before that I think it's a great idea for groups to start out with a smaller project to figure out the whole recording world.

Cold War is a great opening song; both it and Sun of a Gun are the strongest tracks here, making uptempo indie songs the group's strong suit. Both of these songs are a bit overdone at this point, so regular a cappella listeners won't find much new here, but these are still solid recordings for a new group. My Heart With You is also strong — the group's pitch and blend sound good, but there's almost no low end audible here (where are the 2nd altos?), and so the group's breadth of range sounds a bit shallow.

The challenge for the group comes with its pop covers. Til the World Ends takes the Britney Spears song and re-arranges it to be a mellower, more sultry song. It works except for one thing: those high notes in the chorus line ("take it, take it, take NO MORE", and so on — this melody is all over the original) just aren't there. It's hard to take such an iconic, earworm-y line out of a song, especially one where there's so little substance left in the song. I wish that Vocal Accent (and/or arranger Rick Thomas) had kept that melody intact in this version — a sultry, relaxed take on a dance-pop anthem could've been really powerful. Instead, something here just feels like it's missing. Die Young is a better performance, except that the soloist tries to channel Ke$ha's toneless sing-speaking, and it doesn't mesh with the choral sound of the backs.

Overall, Breaking Bricks is a good first effort. Going forward, though, the women of Vocal Accent should be aware of their strengths as a group, and work to pick songs and arrangements that mesh with their abilities.

Finally, I must give both a thumbs-up and thumbs-down to the group for its liner notes. Both the original artist and song composers are credited for every track, which is great — alongside arrangers, mixing/editing credits, soloists, and percussionists. These liner notes are clean and clear; nice job! The only issue is that the track listing doesn't match up with the actual CD: on the liner notes, My Heart With You is track 3 and Sun of a Gun is track 2, when they're reversed on the CD. It's a simple mistake (and one that many other groups have made!), but it's one that could've been caught with one final proofread before the discs went off to the printers/duplicators.

Female a cappella groups are at their best when they go for striking choices: inventive arrangements, gender-swapped soloists, and ambitious gambits. For whatever reason, faithful reproductions of the original material is more likely to fall flat with an all-female group than their all-male or co-ed counterparts.

So were does this leave Vocal Accent? Luckily for us, Vocal Accent takes some noted and pointed risks that elevate them above sub-standard fare. Their take on Britney Spears' Till the World Ends is a vocal-focused reinvention that lands very well. Their grabbing from strong modern female artists (Janelle Monae, Oh Land) helps give the group a strident, powerful attitude.

On the flip side, Breaking Bricks is stronger conceptually than it is in execution. Pitchy, unsure solos on Cold War, Till the World Ends, and Die Young rob the group of any brassiness. The album's shorter length is a positive, but The Rescues' a cappella ballad My Heart With You seems oddly placed on the EP. Perhaps a four-song album without the (admittedly well-performed) track would have been a stronger conceptual choice.

The best thing about EPs is that they either leave you eagerly awaiting more, or they quickly let you know that the group isn't for you. Despite the album's failings, Breaking Bricks left me feeling more of the former than the latter. With more focused production and time spent ironing out a lot of the bumps, Vocal Accent could make a superlative album.

It's probably not a good thing when the first thing I think upon listening through an album is that it seems to have been put together in quite a hurry. The first and most glaring example on Breaking Bricks, by the ladies of RIT's Vocal Accent, was the mixed-up tracklist in which both the liner notes and CDDB tell me that track 2 is Sun of a Gun when it clearly is not (it is actually My Heart With You, listed as track 3). There are other clues of hastening this product in the liner notes, like the group's failure to acknowledge each singer on the EP. The audio offers hints as well, namely with the scattered mix of live, studio-processed, and sometimes both types of sounds; the group just seems uncertain of its identity. (For what it's worth, a quick web search suggests that the group relied upon a Kickstarter campaign to finish production as recently as three months before I received the EP, suggesting that it may well have been put together in something of a rush). I'm not a baker, but I do know you can't rush a cake. It's just not ready until it's finished baking.

Despite of all this, Breaking Bricks is not a bad album. The ladies of Vocal Accent sing with a fair amount of enthusiasm, the arrangements are fun, and the production is punchy and fuzzy/buzzy where it needs to be. I like what they're going for, and how they're trying to get there. Unfortunately, the singing is also out of tune at times, the soloists are enjoying themselves but don't really share the party with the listener, and the production is a little incongruous. Rick Thomas has crafted a sound which is very "live" at times but then moments later is processed with some pretty cool sounding effects. At times, I dig it — Sun of a Gun is crunchy, fuzzy, and breathy in exciting ways. Too many other times, the sound is a little cold or tinny. It sounds like a work in progress, maybe even close to finished ... the cake which comes out of the oven a little too early and the batter in the middle is still wet.

Another problem is best demonstrated by the cover of The Rescues' My Heart With You. It's a nice arrangement of a beautiful song. It's well-sung, for the most part, but it doesn't have nearly enough sentiment. What makes the original so powerful is the warm, thick, oozing atmosphere of the dissonances and the rubato push and pull. Whether it was a result of the singing or the production here, the crucial elements are simply missing. It sounds nice, and it's not the worst version of the song I've ever heard, nor is it even bad. It's just ... meh. That's pretty much the feeling I get for most of the EP.

Vocal Accent has some talented singers, some competent arrangers, and Thomas has some great ideas for what to do with production. I would love to hear the group go back into the studio with these same songs, and take some real time and discover or engage some true emotional investment. I think they have a really good album in them ... it's just not Breaking Bricks.

This album is available for download on iTunes and Loudr, or contact ritvocalaccent@gmail.com to order a physical copy.