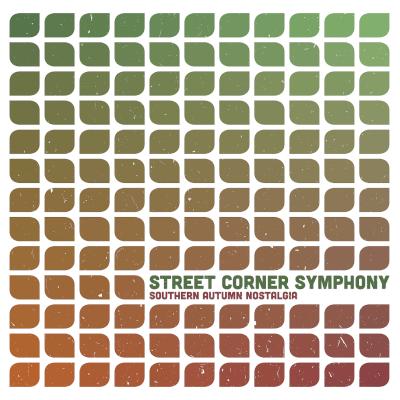 As I listened to Southern Autumn Nostalgia, my hand kept inching closer and closer to a large red button I keep on my desk that reads "Greatest A Cappella Album Ever". One certainly doesn't want to overreact and make hyperbolic statements like that, so I've applied caution and have avoided pressing the button. For now.

There is no element of Southern Autumn Nostalgia that doesn't soar above the competition. The soloists are brilliant, committed and focused. The arrangements are inventive and layered. The original songwriting is some of the best I've heard on an a cappella album. The production is masterful, from the conceptual producing work to the actual sonic pallette to the freakishly good mix. This is a great album, from start to finish.

I'm going to have to monitor my effusive praise, as I wouldn't want to be accused of being a paid shill. I am a shill of my own accord! Some of the most shill-worthy moments are John Martin's powerful vocal performance on the ELO-esque Little Old Me (plus, its distinctly Brian Wilson vocal features), the striking women's choir on Voodoo, the masterful build of the title track, and the glorious prog rock finale of Sicut Tempus Fugit/Dragon Rider (which includes the greatest vocal guitar solo of all time — I don't have a button for that, unfortunately).

If I had to compare Southern Autumn Nostalgia to an earlier band's work, I'd say the experimental but accessible sounds of Electric Light Orchestra or The Alan Parsons Project match up best with Street Corner Symphony's '70s-inspired progressive rock leanings. Picturing You, with its choral-style backgrounds, wouldn't have been out of place on a Jeff Lynne album and Dragon Rider is a delightful blend of King Crimson, Van Halen, and insanity.

If I have to give some constructive feedback, and I probably should so that this review isn't just one long gush, I'd say that the album's momentum falters in the middle section. The songs are still high quality, but from Loves a Loser to Myriad of Stars the album features ballads, power ballads, and downtempo numbers. The album does feel programmed in a ballad-heavy way, and like on a Chicago or Earth, Wind & Fire album you enjoy the ballads, but sometimes you just want to groove.

Southern Autumn Nostalgia is a remarkable effort, which really shows contemporary a cappella advancing through looking back. The combination of superb soloists, excellent original material and stellar vocal performances means that — oh screw it, I'm pushing the button. Greatest a cappella album ever!

One of the purest joys I get from listening to an album comes not from hearing obvious vocal talent, lush soundscapes, or innovative arranging and songwriting. Instead, it comes when I sense that a group is in touch with its identity and using that connection to unapologetically announce: "this is who we are." Do I enjoy the outstanding solos, gorgeous mixes, and thoughtfully crafted arrangements and songwriting on Southern Autumn Nostalgia, the newest album from Street Corner Symphony? Of course. Very much. But what really hits me after each listen through is the satisfying sense that Street Corner Symphony made exactly the album they wanted to make, and it is an album which does not hide one ounce of their individual or collective personalities.

In fact, Southern Autumn Nostalgia is an album with a lot of different personalities wrapped inside a larger theme. As I listened through it, I heard shades of autumn, shades of the south, and most impressively, shades of southern and country rock, blues, folk, surf rock, and even Brit rock. The influences are wide yet consistent. After all, The Beatles may have been the progenitors of Brit rock, but they idolized and stole liberally from American R&B artists (Elvis, Chuck Berry) and surf rock (The Beach Boys), among other influences. Street Corner Symphony has synthesized these artists and many others (hints of Doobie Brothers, Allman Brothers, The Eagles, and others abound) with all original tunes, most of which are indeed evocative of the title concept. As you listen to the middle of the album, you feel the cool crisp air on a late summer, early autumn evening wash over you as you sit on the porch drinking sweet tea (or bourbon) after eating your sweet potato pie or cobbler. Ok, maybe I don't know much about southern living, but the bulk of this album makes me feel like I do.

Bookending all of this charm and lush harmony are two divergent but highly entertaining songs. Leading off the album is Voodoo, one of the only tracks with a real defined groove to it (plus lady backup singers!). It's catchy, sultry, and I would gladly pay to hear an album full of similar tracks. The final track, Dragon Rider, is ... more than just divergent. Songwriter (and soloist) Mark McLemore offers this paean to every power metal song you've ever heard, complete with frantic guest guitar shred/solo (raising my lighter for you, Ed Boyer!), pummeling drums (rock on, Dave Baumgartner!), shrieking and growling vocals, and words like "scepter of the gods". It's blissfully unaware of the rest of the album (and a little incongruous), but it's a perfect example of how much the guys of SCS are enjoying themselves throughout.

I haven't offered a lot of specifics about the rest of the tracks, but it doesn't take much to sum them up. Better-than-average songwriting, top-notch arranging, excellent singing, and even a little humor (though I had to dock Loves a Loser a tad because it nearly lulls me to sleep, the lyrics are playfully tongue-in-cheek). Brilliant mixing by Bill Hare, who continues to find new and effective ways to make voices imitating guitars, strings, horns, and especially organs/keyboards sound organic without sounding contrived. Oh, and of course the sparkles, swells, and shimmers are just perfect.

I have not met or spoken with any of the members of Street Corner Symphony, but I get the sense that Southern Autumn Nostalgia tells me all I need to know about these guys. It suggests that they're pretty likeable, fun, honest folks. Great musicians and singers, too.

Voodoo perfectly sets the mood for the album with Jeremy Lister's soulful performance. The arranging work on Emily is intricate and conversational, brilliantly capturing the hopeful nature of the lyrics. Loves a Loser is an easily welcomed juxtaposition with Little Old Me. John Martin's songwriting and arranging abilities shine through with the playful and upbeat Little Old Me, while Mark McLemore's performance on the melancholy Loves a Loser is textured and heartfelt.

The title track, Southern Autumn Nostalgia, showcases the performance and songwriting abilites of Adam Chance. Coupled with arranging work by John Martin, this track serves as an emotional pillar around which the entire album is constructed. Frozen in Time is a complete change of character following the tenderness of Loves a Loser and Southern Autumn Nostalgia.

With a seamingly endless vocabulary of syllables, Deke Sharon gives us Frozen in Time and Picturing You (as well as Emily). The arrangements are creative and imaginitive, always leaving the listener to guess where we will be going next. Myriad of Stars is delightfully upbeat and met by the talented performing abilities of Adam Chance.

Sicut tempus fugit acts as an introduction to Dragon Rider featuring special guests ranging from The King's Singers to The Swingle Singers, Pentatonix to VOCES8. Dragon Rider is unexpectedly heavy metal, and while full of virtuosic guitar riffs and driving vocal percussion, the performance and execution causes this final track to come across as a parody. Given the lighthearted nature of Southern Autumn Nostalgia and Street Corner Symphony as a group, this could very well be intentional but after an album full of lilting ballads, nothing will quite prepare you for Dragon Rider.

Southern Autum Nostalgia is an excellent album of original songwriting. With this release, Street Corner Symphony proves that it is a group to watch out for in the coming year. I wholeheartedly recommend this album to anyone.

Southern Autumn Nostalgia is available as both a download and a CD at the Street Corner Symphony Store.