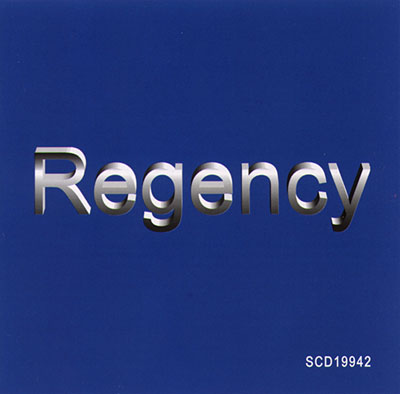 The main problem with this album is its middle-of-the-road arranging, singing and producing: while the finished product isn't terrible, it is mostly without the features which would lead me to recommend it for purchase. Regency has put together a large collection of songs (a plus, compared with most, normally shorter a cappella albums), not so much interpreted as simply sung, and in a recording space notable for its flat response. The group's energy and enjoyment of the material are both manifest, but do not launch the group out of traditional interpretation into any more novel and potentially more striking modes.

As said, interpretation is fairly traditional, albeit with much switching around of parts from one track to the next (without any drops in quality), including soloists who are generally credible. That said, each song sounds as if performed too quickly, right on the edge of control: speed seems to have been taken for intensity, and the result is no small amount of rushing. This breathlessness makes for an exhaustive listening, especially after the accumulation of twenty-one songs.

Tuning is also not bad, and at times the group gets a great ring from their chords. Throughout, however, the bass is a bit warbly and has trouble matching tone with the others. As said, soloists are normally fine if not really superb; I could have stood more bass in the solo spot, where his slightly divergent tone could have been put to good use.

This is a cappella in an urban, aging doo-wop form: an unfortunately lackluster hearkening back to an older style. That style is historically interesting in its own right, a delight to hear when sung by its original practitioners or by modern devotees with more energy of their own. Here, however, the effect is only disinterest.

From Starlight Serenade comes this five-year-old recording from the five man group Regency. A strong start on this CD is never really reached steadily or intensely. Touted as having been recorded in a nine hour span back in June of 1994, I can't help but wish that they had spent more time in the studio, and likewise more time in mixing it afterwards.

While there is no denying the effort that was put forth as this was recorded. It is quite evident as the excitement pushed the beat on a couple of tracks, more notably I'm Ready.

As is one of my usual tests for how much I can enjoy a CD, if I can listen to a CD and forget that it's a cappella, then I'm floored. However on a couple of tracks, one of the low tenors was out of tune to the point of hurting the blend. Many of the tracks, though greatly used on other recordings, do have a sense of freshness in their arrangements, which are aptly suited to Regency's street corner feel. I got the sense as I listened though that Regency's forte falls more along live performance as opposed to recorded tracks, as a few of the tracks included dialogue amongst the members.

One final thought is this: 21 tracks? Granted, it's a bit late to change, as the CD is five years old, but no matter how short the tracks get, 21 tracks times anything is going to make for a long sit and listen.

Rollicking, Rocking, Rippin'-it-up: this is Regency.

Regency presents you immediately with jammin' and driving bass lines that keep your fingers snapping and your toes tapping, solos that are so heartfelt and so energetic you just want to get up and boogie. Although the arrangement style is reminiscent of the doo wop style, Regency has sped up every doo-wop/rock-n-roll standard by quite a few RPM's so that you no longer have to wonder how your parents could have partied to this stuff.

As proof that lots of studio time does not equate to a fabulous recording, Regency's liner notes reveals that the entire album was recorded in one session and does not use any studio tricks or overdubs. Amazing. While there are occasional tuning issues, I can hardly imagine trying to record 21 songs in one 9-hour session, so I have to give Regency props for keeping up their energy and delivering with such gusto.

The album consists of mostly oldies and goodies like, Jailhouse Rock, Higher and Higher, and I Got You (I Feel Good) to name a few. Even though there are 21 tracks on the album, the average song length is only about 2:30 minutes, keeping the tempo and mood shifting and the party rocking. (Caveat: 21 songs is still a bit much in general, no matter how pleasant the music.)

I'm sure you all don't really need to hear me gush any more, and really I can't think of anything else to say about this record. If you like soulful renditions of rock'n'roll, kick-ass soloists, and dancing around your living room like a silly fool, buy this album. There ain't no way you'll regret it.

These guys have energy! It's fast, it's doo-wop (mostly), and it's fun! This album was recorded in a single evening in 1994, and it was all mixed live to DAT. I really like these guys. It has a little Persuasions feel to it, but with much more energy and speed. Most of the tracks are uptempo and filled with feeling. I can't tell you how many doo-wop groups I've heard that have just been boring to listen to, not Regency.

I heard no major pitch problems with this group. Their tempo was pretty steady too. There could be a little less reverb on the recording but it didn't sound like they were singing in a cave. The booklet and case design could use a little spiffing up. They looked like they were just thrown together pretty cheaply. Of course, what matters most is the music on the disc not the package it's in, but everything helps.

Overall a very enjoyable album. Very refreshing. I'm a huge fan of large studio produced albums (a la spiralmouth, The House Jacks) but every once-in-a-while it's nice to hear a bunch of guys standing around a couple mics singing like they do on the street corner.

Regency has been around since the early eighties, singing all the while, and it shows — these guys are pros. A quintet of solid, mature voices with a ton of character, they split solo duties among four of them, and all pull off their respective tracks with panache and flair.

There is no doubt, after listening to this CD, that Regency is fantastic live. According to the liner notes, they were a huge college act in the eighties, touring nationally and winning all kinds of awards. It comes through on the CD — "A live mix direct to DAT as you hear it" crows producer Robert Kretzchmar, and every track leaps out with an intensity and punch that is ably captured by the spare, unmixed production values.

But overall, I wish they had done a little more with a little less. It is, after all, possible to record "live" and get a polished, professional sound — Rockapella's Primer, among others, shows what can be done. And a very generous 21 tracks might be just too generous, even though a lot of the tracks are quickies. With so much of the same type of repertoire, I wish they had really worked on a dozen choice tracks and taken more time.

Those dozen tracks might also have included fewer standards, which make up about 90% of the album. Want to get your fifty-something folks into a cappella? Get them this album.

On the whole, I couldn't help thinking that this was what a cappella used to be like, before someone threw the word "contemporary" in front of it, started arranging with sounds other than "doo", and added non-finger-snapping percussion. I can't say whether those things made things better, but with so much fresh, innovative work being done out there, Regency comes across as a little dated.

These guys are good enough to do something new, but it's not here. Next time you're near Baltimore's Inner Harbor, swing by and check Regency out. It'll be worth the trip, trust me. And while you're there, pick up Starlight Serenade Presents Regency as a little memento. The rest of us can wait for the next album.