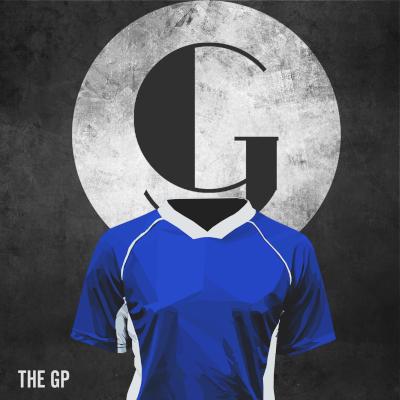 The G-Men brave some exciting new territory in The GP. In their last release, G-Manifest Destiny, they played it safe with mellow, predictable arrangements. There were some adventurous song choices, but the one really inventive arrangement was really too inventive to enjoy. One year later, they are turning songs on their heads with sophisticated arranging, charismatic percussion, and vibrant mixing. They still don't have the formula quite right, but The G-Men have uncovered some a cappella tricks that will make you go "Whoa."

Radioactive sets the tone right for this EP. Matt Shirer ditches the dainty intro from the original and instead hooks you with a brooding throat-bass line. The throat-bass and soloist JP Bonadonna continue to drive the song forward as the backgrounds fill out the space. With the exception of one or two little tricks, the mixing is straightforward, loud, in-your-face pop. So in-your-face that sometimes it distorts unflatteringly, but it goes with the grunginess of the song. Creative arranging and percussion, a strong solo and backgrounds, and aggressive mixing; this song is the whole package deal.

Thinkin' Bout You and Settle Down have a lot of the same gusto but don't come together so well. Like Shirer, Brendan Asante recognizes where you might lose interest and compensates with clever arranging. The new sections he composes are musically impressive, but stylistically inappropriate and sometimes difficult to follow. As cool as the throat-bass and distortion is in Radioactive, it doesn't really have a place in Thinkin' Bout You. Meanwhile, Settle Down is catchier as a quirky downbeat song than a theatrical Broadway musical. It doesn't help that both soloists lack the range and tone to own the lyrics and melodies the way Kimbra and Frank Ocean do in the originals.

Everybody Loves Me and Drumming Song are more conservative arrangements that are less innovative but also require less attention to digest. The difference is that Everybody Loves Me is unbelievable and Drumming Song is unconvincing. With Everybody Loves Me, you get a fun drum and bass groove and a powerhouse solo from Noah Collins. With Drumming Song, you get pushed relentlessly forward with a blunt solo delivery backed by antsy percussion samples, "din"s, doh"s, and "doh no no"s. Both of these songs are packed with energy, but the way the energy is unleashed reflects two very different sides of The G-Men.

What makes this EP special is that both sides of The G-Men are willing and eager to pour their personalities into each arrangement. Sometimes, you hear a group of creative, talented, professional musicians who are pushing the frontiers of a cappella. Other times, you hear a relatively young group (established in 1995), with a revolving roster of musicians that are figuring out their strengths and weaknesses. It's exciting to hear The G-Men taking chances and developing their musical tastes. Get The GP to hear Radioactive and Everybody Loves Me, and maybe you'll find something new for your tastes, too.

The GP by The G-Men is a fantastic EP; it's only five songs, but a complete musical journey. The G-Men really brought their A-game to this release!

I present the winning three elements: arrangements, performances, and production. The arrangements are meticulous. Every rhythm and held note is written with purpose and every vocal line is added or removed for a specific reason. They remain sparse when appropriate and fill-out without being excessive when required. Radioactive begins with a very basic dub-step line and a solo, nothing else. Jazz is explored in Settle Down, but the song retains a contemporary feel. Drumming Song is powerful and has been on my personal playlist more times than I can count since receiving this album.

The performances are 100% committed. The emotion and intent of every single voice, from lead to the most basic background line, is evident throughout. The beatbox needs special recognition for being amazing, while not distracting from the heart of the songs. I wouldn't mind getting a few pointers in beatboxing after listening to this album. If I have to nitpick, I could have used a little more power in the Radioactive lead vocals.

The production (from Plaid Productions) is magical. Perfect balance in the mix. Just enough studio trickery to add a level of interest, but not too much to distract. Some of the credit for the awesome percussion has to go to the production team; I tip my hat to you.

This EP, or GP (which means "Gentleman's Playlist"), is certainly a gem that I intend to hold as a standard for what large, all-male groups can strive for. This is one Gentlemen's Club that everyone should join!

With mixing help from Alex Green and Alexander Koutzoukis of Plaid Productions, the Michigan G-Men present an exhilarating and unique EP with The GP.

Radioactive expertly sets the mood for The GP with Matt Shirer's intricate arrangement. Complex and innovative arranging work permeates The GP, expertly capturing the lyrics in stunning, electrifying ways. The second track, Settle Down, showcases the performance and arrangng abilities of Brendan Asante. Full of jazz re-harmonizations, this track is different enough while staying true to the original.

Thinkin' Bout You is a complete change of character following the upbeat nature of Radioactive, Settle Down, and Everybody Loves Me. Thinkin' Bout You, again, showcases the performance and arranging abilities of Brendan Asante. Giving Frank Ocean a run for his money against the backdrop of rich background harmonies is a welcome and necessary break from the mid-tempo tracks that surround it.

The GP finishes with an imitative version of Drumming Song by Florence + The Machine. Lacking intensity, this track leaves the listener feeling incomplete. My only wish for The GP is that it had ended with bountiful energy (like we hear in Radioactive).

Living up to its name, The GP is truly "The Gentleman's Playlist". With The GP, The G-Men set themselves apart from the thousands of average, all-male collegiate albums and EPs. I highly recommend this EP to everyone.

The GP is streaming on Spotify and available for download on iTunes. Physical copies are available through Bandcamp or by emailing the group directly at gmen@umich.edu.