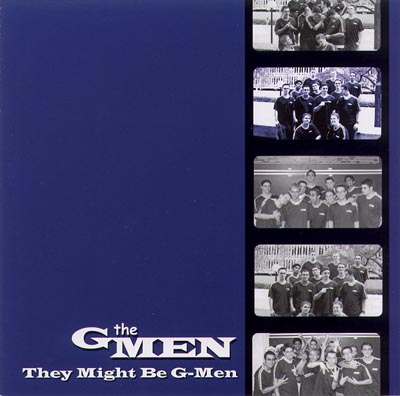 They Might Be G-Men, from the University of Michigan Gentlemen, is, like many collegiate a cappella albums, graced with a title of remarkable and perhaps accidental appropriateness. The word "might" does a fair job of summarizing how ambivalent this disc is: generally in tune, sort of humorous, not quite rocking, enjoyable but noncommittal, nothing hair-raising... They Might... is light-weight.

The group does well enough in most capacities, but has some growing to do. Soloists don't have enough heft to carry many songs (e.g. Build Me Up...). The bass is strangely light throughout. The whole group has a tendency to sound remote and uninterested, not quite convinced and thus not quite convincing.

At times, it seems that the G-Men have missed the memo on certain things. For example:

Give the G-Men kudos for their varied attempts. Next on the agenda has got to be more interpretation, more emotion, more weight...an approach to the music in general more committal.

They Might Be G-Men is like the cake you make from your mom's cookbook. You go through all the steps in the right order, but for some mysterious reason it just doesn't end up tasting that good. The ingredients for this particular cake, the usual suspects of a men's collegiate a cappella album, are all here and accounted for, including the original number, the humor opener, the one or two oldies, and the alt rock covers (Moxy Früvous says hello, but Guster is left off — Michigan is, thankfully, a ways from Boston).

But in the end, it falls flat. The Gentlemen need to perfect the fine choral art of singing in a cold room, into microphones, the same way they sing on stage. It's not easy, folks, to capture the warmth and meaning of a song on tape. It's so hard that there's an entire awards show called the Grammies to honor that particular skill.

Part of the problem might be that the Gentlemen seem to be trying to perfect what the guys at Stanford, Tufts, and Penn were doing ten years ago. We've got Major Tom, Video Killed the Radio Star, and one-hit-wonder-to-end-all-one-hit-wonders Shai's If I Ever Fall in Love, all of them played to death back then, eagerly adopted by the collegiate a cappella community a few years later, and here beaten to a pulp all over again.

I have no problem with the fact that college a cappella has long kept '80s music on life-support, but still. There are good songs out there. New songs, songs we haven't heard. Try them out.

And the G-Men make a glaring error in the inclusion (as the first track, no less) of Rockapella's doo-woppy-poppy Folgers commercial (a classic irony in the a cappella world, considering Rockapella isn't even a doo-wop group). It's especially glaring because it takes an entire twelve tracks until these boys finally hit a groove, on In the House of Stone and Light. If they'd put that track first, the good feeling would have carried.

As I listened to this album, I found myself hoping desperately for one redeeming track that I could write about as the bright spot in a fairly dismal atmosphere. Unfortunately, it didn't appear.

This album is splattered with poor tuning and bad singing.

Some of the arrangements are OK, and probably would have stood up quite well with better performers, and the song choices are interesting. The soloists have their good moments, and most of their voices have pleasant tones. However, this group really needs to pay close attention to fine-tuning those chords and singing the right notes!

Nearly every group has occasional, forgivable tuning errors. This album has notes that are clearly wrong, and some of the soloists' voices audibly break on a couple of the higher notes. You might expect to hear a voice break in a live performance, but not on a studio-produced CD. All of the singers need to do a lot of work on the transitions between their chest and head voices, as they become noticeably weaker and change tone as they move into their falsetto ranges.

Timing is also a big problem for The G-Men. Songs get faster and slower, echoes are late, and in one song, the backing vocals are so late that they ended up adding an extra beat to cover for it!

Build Me Up Buttercup is possibly the worst offender. The very first word is off key and over sung, and that word has friends! The chords are muddy, the echo voice is out of key and out of time, and there is more scooping here than at your local ice creamery.

There are really no redeeming features here. If you are not a blood relative of these boys, don't bother.