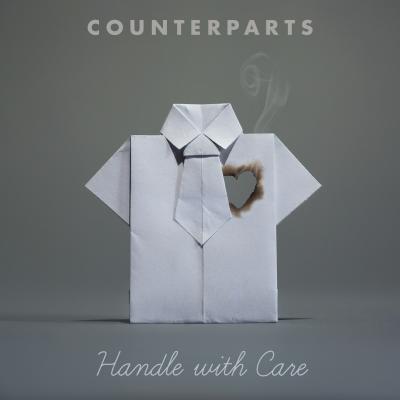 A little more than a year ago I said that the Counterparts are, if nothing else, consistent. From the release of Low Key to the making of Handle With Care, not much has changed.

The literal approach to transcribing instrumental parts to vocal syllables is the hallmark of Counterparts music. Unfortunately, there are many arranging techniques that sound catchy with an instrument but corny with a singer. Like the bland "doo doh ba da den doh" intro to Undiscovered or the dubstep "wob wob wob" chorus in Too Close. And as much as I enjoy Never Let Me Go, I get jarred every single time by the harsh "J" (piano?) that punctuates the opening chords. Where movement usually intensifies an arrangement, too many of these attack-heavy riffs layered atop a bed of full chords actually dulls the backgrounds. It reduces elaborate compositions to droning rhythms squarely keeping track of chord changes. By employing the same syllables and lighthearted delivery throughout, Handle With Care lacks the dynamics and surprises needed to capture whatever made these ten songs special.

The production also doesn't do much to differentiate songs, but it does have the same vibrant sound from the same team that worked on Low Key. Chris Juengel again edits different takes together seamlessly, while Carl Taylor mixes and masters to keep the solos in front and the chaotic background parts in a careful balance with one another. They dress up Chris Whitney's percussion, particularly in Tears Dry on Their Own, with tasteful mixing and sample overlaying. There are just a few too many weak "doof" tom fills and "k" snares to make a really convincing kit. My biggest problem with the production is that the album credits didn't come with the digital download, and don't seem to be available online. This is inconvenient as a listener and disrespectful to all the people who worked so hard to produce Handle With Care.

The soloists certainly deserve to be recognized. The Counterparts shift to more pop and less jazz, if only slightly, than their previous albums. Pop songs require a strong soloist to carry the melody, and almost everyone on Handle With Care steps up to the challenge. When the style, tone, and range are all there you can really get carried away with the lead, even if the background isn't all that emotive. When it comes to picking the right soloists, being consistent is exactly the way you want it to be.

In general, consistency is not all that desirable in a ten-song collection. There needs to be different dynamics and different textures to set songs apart from one another. In a cappella that means departing from the original instrumental arrangement and treating the voice as its own instrument. Too Close is the only song where the Counterparts take that risk, and it still sounds too square.

If you've liked the Counterparts in the past, you can be confident that you will like Handle With Care. But, it would be nice to hear them try more of something new.

With clever arrangements and great soloists, the Counterparts present a fragile and diverse album in Handle With Care.

Never Gonna Leave This Bed is a delicate, creative arrangement that is different enough while still staying true to the original. The juxtaposition between Undiscovered and the track that follows, Melody Gardot and Ken Pendergast's Your Heart Is As Black As Night, is easily welcomed with the Counterparts' haunting interpretation.

The Counterparts' arrangement of Amy Winehouse's Tears Dry on Their Own combined with a great solo performance perfectly captures the heartbreaking nature of the original, though I would like to hear the group take some more creative liberties with the arrangement.

The solo performance on the love ballad, Lightweight, gives Demi a run for her money. My only wish — that the background voices match the level of energy and intensity presented by the soloist!

You and Me Are Gone is written by Jamie Cullum. The soloists delivers an edgy and energized performance, tying together the theme of unrequited love that permeates the album.

The Counterparts' adaptions of Ingrid Michaelson's Ghost and Florence + The Machine's Never Let Me Go are both powerful and textured, filled with emotional intensity.

Handle With Care finishes with an energized version of Alex Clare's Too Close that ties the entire album together.

Don't be afraid to take chances as arrangers and performers! If the Counterparts can find some creative arrangements and perform them with energy and intensity, I guarantee they will knock their next release out of the park! If you haven't checked it out already, I do recommend purchasing Handle With Care.

Jazz and pop. Jazzypop. (Not Dirtypop.) The Counterparts present a jazzypop blend of music and bill themselves this way so that they can tailor their performances for the appropriate audience. With its long history of success, the group recorded an album that has great tuning and consistency.

Most of the tracks on Handle With Care are standard collegiate a cappella fare, with some standout solos — particluarly Joey Wallerstein on Undiscovered and Sam Hernan on Tears Dry on Their Own. Where the Counterparts excel, however, is when they let their jazzy selves take over. Your Heart Is As Black As Night feels like listening to velvet. The swing jazz tempo and sultry soprano-disguised-as-alto solo serve as a nice mode change from the rest of the album, showing off the true strength of the Counterparts. I want to wrap myself in the rich background altos. That's not weird at all, nope.

The Counterparts occasionally falter in this recording when they go for the more advanced stuff. The pitched toms in the vocal percussion of You and Me Are Gone sound silly and stick-out from an otherwise serviceable percussion line. But in Save the Last Dance for Me, the riffs of the vocal percussion work perfectly for a familiar song. The group's recording of Too Close, while technically fine, doesn't make any new statements about the song.

Perhaps the album would be better described as pop first and jazz second. That may be the direction the Counterparts are heading, and the ratio of pop to jazz on this recording would agree.

This album is available from CD Baby and iTunes.