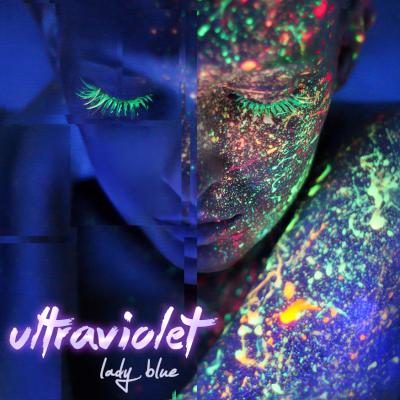 Ultraviolet is a good example of why song selection is so important in a covers-driven medium like a cappella. Duke's Lady Blue doesn't really hit the mark with this album: there are a few songs here that work with these singers' choral sweetness, but the songs that don't mesh with that sound are incongruous, leaving the album struggling to find its identity.

An example of a good song choice for Lady Blue's tone is Never Ever: it has the tone of friendly girlfriend advice over brunch, with just the right amount of breathiness and sweetness; even the group's disconcerting (and disjointed) grunts can be easily overlooked. Say has a similar tone, and it works well with Lady Blue's delivery. The group is significantly less successful on Bad Girl; there's something about the song's sleaze that these singers just don't capture at all. The layered vocals on the lyrics "when the red light comes on I transform" are technically proficient, but they're almost too perfect: these are supposed to be bad girls, not girls who follow every rule and sing every note as-written. Back to Black is another suspect choice. Lady Blue seems to realize this, changing the song's explicit second line to the much tamer "[he] kept his lips wet", but later lines referencing drug use are unconvincing.

My biggest issue with Lady Blue — and I felt this way with their previous album Off the Record — is that these singers never sing all-out. Some of these songs beg for a wider range of emotions and dynamics, and these ladies never get there. Break the Ice and Uprising both languish in a slow churn; I want to hear these singers feel something and truly wail when the song calls for it. Soloist choice comes into play as well; the lead on Anything Could Happen is solid for much of the song, but there's a section where she slips into head voice, and it shows that the song just isn't the right fit for her overall range.

Ultraviolet features singers from the class of 2009 all the way up to 2016; this album was certainly recorded in several chunks over the years. (One glaring omission in their liner notes is any mention of who recorded, mixed, and mastered this album; my internet sleuthing turned up the album listed under Vocal Mastering's recent projects, but it would have been nice for the group to list who else was involved.) It's quite likely that there was no one strong vision behind the album, no single leader to make decisions and coach the group to deliver more emotion or pick the best possible songs. Lady Blue could definitely benefit from having that kind of unified vision and leadership to steer the group's next recording.

Ultraviolet, the second release from Lady Blue to be reviewed, is focused but ordinary. Following Off the Record, Ultraviolet is neither a step forward nor backward.

The tracklist panders to the more overplayed songs of the past several years (Set Fire to the Rain, Say, Anything Could Happen, and Battlefield). But it also features lesser-arranged songs (Jai Ho, Never Ever, Uprising, and Bad Girl). The mixes are very creative while remaining true to the organic quality of the arrangements. And they have clearly been enhanced by The Vocal Company to give the listener everything that their studio has to offer. The backgrounds on tracks like Jai Ho, Uprising, Set Fire to the Rain, and Bad Girl have plenty of effects to generate listener interest, while not distracting from the soloist. But is a varied tracklist and immaculate production enough to set Lady Blue apart from the hundreds of other all-female collegiate a cappella groups?

The arrangements never seem to reach out and grab the listener. If you are familiar with the original versions of these songs, chances are that you could guess what's going to happen next. Lady Blue is talented enough to take on/create more than transcriptions. The fascinating part about the arranging though, is the consistency of sound: a feat that even some of the most accomplished a cappella groups struggle with. Nearly every single arrangement on Ultraviolet is writen by a different group member. The same can be said in regard to the vocal percussion, nearly every single track features a different member of Lady Blue. The percussion is full-bodied and nuanced to the point that it is no longer just keeping time but enhancing every aspect of the arrangements.

Ultraviolet is definitely not in my top ten, but it's not in my bottom ten either. To remain relevant beyond the hundreds of all-female collegiate a cappella groups doing the exact same thing and doing it better, Lady Blue will need to find something unique to say with the group's arrangements for its next album.

Lady Blue opens its album with the lyrics "it's been a while / and I know we shouldn't have kept you waiting / but we're here now". It's a fitting opening for an album that sounds like it should have been released in 2011. The rosters of Lady Blue that contributed to this album include alumnae who graduated from 2009 onward. While I'm sure the song choice on the album reflects the years that went into the production, unfortunately this makes the album as a whole sound somewhat stale. Set Fire to the Rain, Jai Ho, and Battlefield have been covered repeatedly in collegiate a cappella.

That doesn't mean that these tracks are all bad. Jai Ho benefits from a stellar, expressive solo by Rajasree Roy and percussion by Tatianna Mott that really fills out the sound, making the chorus joyous. On Set Fire to the Rain, I was incredibly impressed with the diction on the solo from Christina Lan (but thoroughly confused why Angela Ugolini recorded the percussion: why bring in a professional when you have serviceable vocal percussion in the group?) On Battlefield, however, the group plods along — something about the disjointly arranged parts in the chorus makes it feel like the tempo is slower than it is, and that the soloist is singing through molasses. The recording of Uprising, however, is driving and intense, just as it should be.

It's hard to get a clear picture of the status of an a cappella group from an album that spans so many years. That said, the later-recorded tracks on this album show a lot of promise. Lady Blue would benefit from being able to record an album in a shorter period of time and conceptualizing an entire presentation for an album rather than racking up yearbook-style tracks.

Ultraviolet may also be purchased through Lady Blue's website.