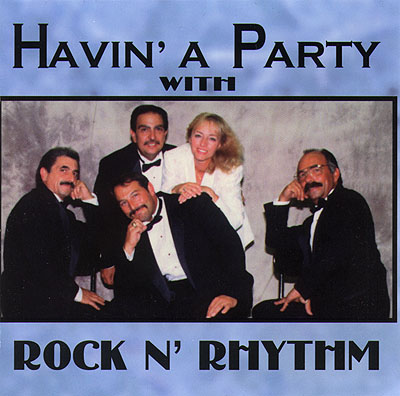 Starlight Serenade sends more modern doo-wop your way with Rock N' Rhythm, a slightly mixed (four gentlemen and one lady) group specializing in old standards with some more recent tunes thrown in. Of the Starlight discs to have come my way so far, this is the most enjoyable: more convincingly than on the other discs, these singers engage their music and have a good energy to their approach.

There are some problems. Tuning can slip, especially in the backing voices when solid chords are called for; this is compounded for my ear by what sounds like no attempt at matching vowels — this is not barbershop, but there should still be that ring (this is a problem especially for It's Alright). Similarly, while the bass does a nice job when he is walking, his sustained notes falter more than they should; when he opens songs, as well, his tuning takes some time to settle. Tuning is also affected, frankly, by the lone female voice, which is especially jarring when used on leads.

Most surprising is the shaky rhythm which erratically rears its head on almost every track. While I do not advocate singing to a metronome, this group can sometimes not be followed due to its divergence from the initially established beat.

So: good energy, some interesting experimental choices (River of Dreams as doo-wop?), but so-so tuning and shaky rhythm. As doo-wop goes, this is not among the best.

This is going to come out somewhat right way round (as the Brits might say). I started out liking this CD, really I did...a quintet with what I thought to be a good blend, and obviously some good chops amongst them started out to have a seemingly strong collection of tracks.

If anything, I wholeheartedly agree with their own designation as "street corner `acappella'...", and that there in lies the problem for this recording. An album called "Havin' a Party" should elicit a desire to keep playing the album until the CD player wears out. My reaction was how much longer until it ends?

To their credit, there is definite evidence that Rock N' Rhythm are quite good as performers. However, I kept getting the feeling that the recording arena tried their patience, especially as the CD was going on. Many of the tracks, regardless of tempo or feel, felt very similar...not so much "here are these incredible pieces of music which we want to put our spin on" but rather "this is how we make the song fit to us". Two tracks in particular stand out in this vein:

First, Drift Away...and as much as I hate to make a comparison, I will. The Nylons also recorded this song, and recorded it much better. Even if you took out the drum machine, it still would be a more powerful recording with vocals alone. I just never felt any peaks or valleys with the track...just a very plateau-ish feel to it.

Second, Wonderful Tonight. If you haven't heard the Eric Clapton classic, what rock have you been living under? Regardless, it feels like the group took the track and sloughed off any nuances of the song. Such is the danger of a cover; if you do it so differently to the original, chances are good it will alienate fans of the original. That was the case for me.

I can't recommend this CD, unless your a diehard fan with a penchant for Starlight Discs. In that case, this may just take up space on your CD rack.

Rock N' Rhythm's liner notes say that the group is, "Keeping the street corner `acappella' sound alive and fresh." After listening to this album, I can't dispute that. Produced as though the quintet was still standing on that proverbial street corner, this album delivers high quality doo wop with gusto and integrity.

The arrangements on this record are varied and fun to listen to, the song selection a great mix of popular tunes and less popular, older and less old. I particularly enjoyed Could This Be Magic and It's Alright. I noticed that Rock N' Rhythm has performed enough (and performed enough together) that they have the great ability to match vibrato while holding chords. I love that. Groups that can do that successfully have the ability to create a fuller, thicker sound with a lot of soul. In addition, Rock N' Rhythm has graciously provided full writer credits for all of their songs, which is appreciated by this reviewer.

However, that same production quality that harks back to the hey day of street corner a cappella also gives Rock N' Rhythm an overly "retro" sound that, in the end, sounds tinny and thin. Nor is the tuning impeccable (the solo in The River of Dreams is flat....a lot). Also, I feel that the male soloists are stronger than the female one, which is kind of odd since I've always felt that there are generally speaking more female singers than male singers. Odd.

In any case, Rock N' Rhythm is a fun album and an easy listen, although I'm not the biggest fan of the genre, I'd recommend it to fans of doo wop and '50s style a cappella.

This is the final disc in the set of CDs that I've received to review from Staten Island, NY based Starlight Discs. The albums all feature similarly bland and awfully unimaginative looking cover art. The groups showcased on these albums are all Doo-Wop/Streetcorner-style groups of questionable quality. I'll also have you know that this is not the strongest album of the bunch.

The first thing that jumps out at me is their pitch. I usually go easy on groups of this genre when it comes to pitch but the songs are so littered with annoying intonation problems that it's hard to ignore. As far as blend is concerned, it's hard to say. Charlene Siciliano (the lone female of the quintet) is so loud in the mix that it's hard to hear anyone else. Her backup harmony lines almost cover the soloist at times.

The production quality is just so-so. It sounds like the lead stood in front of one mic and everyone else in front of another (if not all of them just standing in front of a pair of mics). The whole thing is then just washed in reverb. The bass lacks any definition whatsoever and the male backups are mostly covered by Mrs. Siciliano.

The whole album has a very amateurish feel to it. I'm sure they'd sound fine singing in the background of some corporate function but on a CD, I'm not so sure.

Rock N' Rhythm is an a cappella quintet that specializes in street corner doo-wop. I've always felt that doo-wop is the purest and most enjoyable form of a cappella to listen to. Taking that into account, I was excited to break into Rock N' Rhythm's latest doo-wop project, Havin' A Party with Rock N' Rhythm. Unfortunately I found this album to be less like a party and more like a three hour seminar on differential equations. Just like a seminar, I started to slouch down in my chair and slowly began to lose interest the longer it lasted.

Tuning, tuning, tuning! Rock N' Rhythm needs to address some serious tuning problems before getting back into the studio again. Many leads in songs were fighting to stay in tune with the rest of the song, and the background was struggling with its own intonation concerns. I wish the liner notes had mentioned who sang lead on specific songs, it would have made it a lot easier to pinpoint the soloists that were solid in contrast to those that weren't.

I truly believe that the arrangements were a large part of the intonation problems. Sometimes parts seemed to be written when they weren't necessary to the overall texture of the song. A word of advice for all arrangers across the country: making an arrangement busy doesn't make it a good arrangement. Always think to simplify things in the interest of your group, because bigger isn't better, better is better.

There was anywhere from little to zero sound production on this album. The following are the most basic fixes in a mix down: background breaths, attacks, releases, and background balancing. They were evidently not given the attention needed.

The best track on the album was Six Nights a Week. A controlled lead in front of a balanced and simple background earned this track a very well deserved CARA 2000 nomination for best doo-wop song.

Overall, I didn't enjoy listening to this album. Too many out of tune songs, too many weak arrangements, and too many contemporary songs that should NEVER be arranged for doo-wop. This one gets two thumbs down.