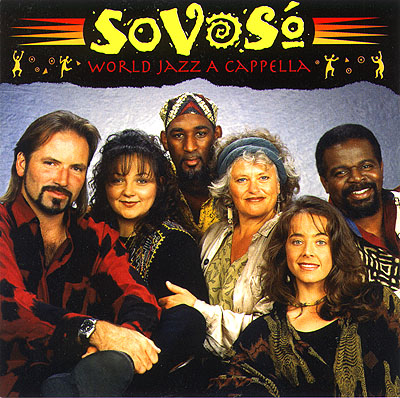 SoVoSó's earthy and organic World Jazz A Cappella is a vocal soundscape rich enough for contemporary tastes and sparse enough for true a cappella purists. Circlesong one moment and café-style blues the next, SoVoSó's magic is in the powerful phrasings and inflections that imbue simple words with a deep and abiding spirituality. The greatest achievement of this CD is the marriage of clear smooth studio production and the raw energy of live performance. It's a great CD.

SoVoSó boasts three "graduates" of McFerrin's Voicestra. The influence of improvisation and spiritual connection to the music is clearly evident throughout. The group cares for its themes like gardeners, patiently nurturing the musical seeds until they bloom into full songs. It's beautiful, but not recommended for the ADD generation. Take your time with this one. You'll miss the point entirely if you just sample it.

Still, World Jazz A Cappella has its faults. Most glaringly, the lyrical content of the album is simply not of the same caliber as the music. Example:

"You know that I'm in love with you. I know you feel the same. I wish that you'd give me a clue what's going on in your brain."

If this album aimed to poach the Back Street Boys' fan club, I could understand doling out the cliches. But as long as a group is willing to take some musical risks, lyrics like these fall embarrassingly short of the mark.

Then there are times when decent lyrics are repeated excessively. "Show them the dance. Show them the breath. Show them that they see. Shababa" has to last you about four and a half minutes on track three (entitled ...you guessed it: Show Them Dance). Now don't get me wrong; when you're in the "zone", you're like "Yeah... the dance...yeah..." But when you're NOT in the zone, you may be as likely to say "Show them the dance? Riiiiight. Who? Why? What's Shababa anyway?" Disappointingly, the sparse insert doesn't give us much additional information about the songs.

On the other hand, McFerrin's Circlesongs (and John Williams' Star Wars The Phantom Menace score, for that matter) used fanciful babble rather than lyrics with meaning. Often this use of nonsense is the most effective lyric for SoVoSó. The listener can imagine whatever meaning she chooses, or none at all (hence the sparse liner notes?).

My favorite is track 11 and I haven't the faintest idea what it might be about. It might be Spanish, or a combination of Spanish and gibberish, or maybe just Spanishy-gibberish. Whatever it is, it's one infectious jam.

World Jazz A Cappella is an open invitation to join in the circle, but it won't sweep you up unless you let it. Absent the rude awakening of cliches, SoVoSó is a group I'd be swept-up by anytime. It's no wonder McFerrin called them "tight, soulful and a whole lotta fun". They are!

It is no fault of SoVoSó's that the sort of music they perform, and the ethos which it and their liner notes seem to encapsulate, simply rub me the wrong way. The group members are clearly excellent singers, but the music leaves me cold. It seems that some sorts of fusion simply do not work. Culinarily, French and Japanese can go hand in hand, Tex-Mex and Italian cannot. Musically, groups like Take 6 have shown how successfully Christian and Jazz may be blended. "World" and "Jazz" . . . at least in this case, they seem unsuccessfully mixed.

What each member of that pair should contribute is a bit uncertain. While there are interesting chord structures throughout, and some songs in particular can be especially lush (Down by the Riverside), intonation is mostly not matched with the text of the song, tending too much to breathiness for my own tastes; all this from "Jazz". "World", I think, is responsible for more of the album, including the selection of songs themselves, the various noises incorporated into some of the tracks, and the group's earthiness. What results to my ear is a set of songs which sound too long, because they are lacking musical motion or goals and because they are sung fairly straightfowardly.

I could have stood a bit more bass in the mix, although the light effect may have been what was desired. Percussion is sprinkled in throughout, and normally meshes well with the texture of each song; particularly good on this score is the dance song-cycle, which however must lose something simply for having been composed for a dance which the listener obviously cannot see.

SoVoSó, again, sounds like an excellent group, but performs music which I personally would not care to hear regularly, or would put on only in specific contexts. A good album; I can neither recommend it nor disapprove, because of the conflict with my tastes.

From the mouths of the group SoVoSó comes this gem of a recording, World Jazz A Cappella. It is an extremely clean and moving collections of originals and covers, along with a cutesy opening, First Words, that segues appropriately enough into the original Say.

I had always heard of this group, but never had bothered to listen to any of their recordings, mostly due to the moniker of "WORLD jazz". I, being the Midwestern suburban guy that I was raised as, typically never bothered to listened to anything that indicated itself to be "World"-anything. I'm not inclined to deny myself that opportunity again. So to SoVoSó, I thank you for breaking down that paradigm that I created.

The music is EXTREMELY accessible to anybody who appreciates good music. Each arrangement is toe-tappingly listenable, and incredibly performed. More incredibly, I found this to be one of those rare recordings where you could lose yourself in the music and forget it was all vocal.

Another kudo to offer is the wonderful chain that was created in the song order. Where many recordings might have one or two tracks that seem out of place in the song order, or maybe so far off that I would wonder why it was included in the first place, SoVoSó's choices make for great hills and valleys on a musical frontier.

For this particular recording, the only wish I would've had was in the liner notes, particularly with the track Tu Para Mi, since I'm fluent only in English, and even that's questionable.

Definitely a must buy, I'm holding onto my copy for dear life, as I fear that now that you know I have it, I may be a marked man.

I think SoVoSó is one of the finest a cappella groups around today. They have the warmest, smoothest, most soulful sound there is. The group is made up of three men and three women (three of the members used to be in Voicestra, Bobby McFerrin's group). These women and men just ooze harmony. The sound is thick and lush. The leads are wicked and slammin'.

One would really have a hard time finding anything wrong with this album. I suppose the one thing that I don't really care for is the first track, First Words. It is simply a track of people babbling randomly (for thirty seconds). It just feels random and out of place. But it in no way spoils the rest of the album; it just feels weird.

I particularly love the Sly and The Family Stone cover Thank You (Falettin Me Be Mice Elf Agin) (track #4) which was nominated for a 1997 CARA award for Best Pop Song (just one of their many awards and nominations). I've had the CARA CD for a while now and this is usually the only track I play on it. The song is just loads of fun and happiness and I can often be found humming/singing it for days after listening to it. Other favorites of mine are Say (track 2) and U (track 12).

Overall, this is a great album. The pitch, rhythm, blend, solos, groove and sound production are just perfect. I highly recommend purchasing a copy of this album so that your collection of a cappella recordings can truly be complete.

With a typical debut CD, safe to say you approach with caution, expecting imperfections — sloppy tuning, careless phrasing, overambitious arranging — so let me put your mind at ease...SoVoSó's is NOT your typical debut CD.

At the risk of exaggerating, the six soulful members of SoVoSó have fashioned an balanced album of covers and originals so polished, so spot-on...well...musical (for lack of a better word), that you're left wondering where they can go from here. (Thankfully, their second CD Truth & Other Stories is already out so we don't need to answer that.)

Okay, so World Jazz A Cappella is a pretty boring title — but a more accurate description would be pretty tough. Like jazz? Check out the Take 6-esque harmonies of the spiritual Say a Prayer. Like more mainstream a cappella? Groove out to the Sly & the Family Stone classic Thank You (with Nicolas Bearde's dead-ringer solo and rock solid (uncredited) vocal percussion). Have a hankering for some international music? Check out Tu Para Mi — if Vocal Sampling and The Real Group had a kid together, this would be it. And there can be little surprise why the group credits Bobby McFerrin as a teacher and guide — his creative influence is everywhere, especially in the rich and varied bass lines.

Quibbles? Well okay, a couple of teeny, tiny ones. A few of the tracks go on a bit too long and there's some scattered mixing mushiness on the extreme highs and lows here and there. On the listenability front, I'm torn on the issue of tracks 7-12, a series of short pieces originally created to be part of a larger dance suite. Minus the dance, they still explore a diverse range of moods and styles + they're ceaselessly inventive and exquisitely rendered — but that said, they're also not tracks you're be revisiting frequently. Aw heck, if these are the only problems, every a cappella album should have them.

Simply put, you want this album. If you don't know SoVoSó now, you will. And you'll wonder why you didn't pick up their first release sooner. Rather than wait, treat yourself now.