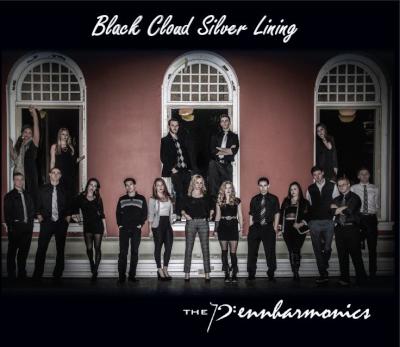 The Pennharmonics belt and whisper, building their songs atop powerful pads and galloping rhythms. Leads power-wash listeners with abandon and intensity. Rich phrasing from the backs insist that you attend the songs' message. Arrangements admittedly head towards familiar destinations, but they take enjoyable scenic routes to get there. The Pennharmonics are the happy collision of raw emotion, pop sensibility, and theatrical melodrama.

And when pop with a little attitude is called for, The Pennharmonics bring it. Olivia Jones (I Need Your Love) will leave you brokenhearted. Michael Murray will get you fist-pumping as he flexes his vocals against the man (Uprising). Octave-dropped bass and sampled vocal percussion provide all the bombast to back up the leads' sizzle, whatever the style.

The production hands of Victoria Brahm, Rob McNeil, and Five Spice Records (Colin Egan and Marianne Chang) balance the group's sound between naturalism and processing, somehow bringing more of each extreme to the recording than listeners might expect. It's a compliment to the deft handling of the realm between singer, producer, musical director and engineer, and for those sensitive to the tools and choices of that domain, it's an unexpectedly interesting ride. Many producers today have established preset values for their tracks — a premix. It's often a necessary evil in the process of lifting inconsistent amateurs to a near professional level in record time. But it's also a recipe for homogenized a cappella. In all fairness, collegiate groups slavishly imitating pop and standards doesn't help matters much. And in a world where fans are increasingly paying pennies to stream instead of dollars to own, and tuition-strapped families are the main supporters of patronage-based funding, the pressure on engineers to produce magic for thin wages is a giant sucking sound that undercuts the art and industry of a cappella. But I digress.

Against that backdrop of same-mix-different-group, Black Cloud Silver Lining stands out. Five Spice ensures The Pennharmonics' energy, dynamics, and humanity stay front and center while keeping enough oomph and polish to slip right into playlists with considerably higher recording budgets. Some parts are multed unexpectedly while others are just as unexpectedly barren. Some breathe, free from snap-to grids, while others are unabashedly artificial. Some lines pop only to fade into the mix soon after. There's a lot going on and it all adds up to an interesting listen.

Not all the engineering is a hit; soft lead vocals reveal a sporadically unnatural quality to the compression (Not Giving In, Uprising, I Need Your Love, Give Me Love). Similarly, the mix on Blue Ocean Floor is uncomfortably compressed compared to other tracks. And more present leads on the beginning of Wings would have been a plus.

The liner notes could also have used more attention. They contain a page-long introduction, and a nearly full page of sponsors. The back panel reveals song titles, leads, and arrangers, but nowhere are composers credited. It's a serious omission but sadly, a common one. Far more inexplicably, The Pennharmonics fail to credit their own soloists on Wings and Nothing Left To Say. A quick review of liner notes best practices would help the group give credit where it's due on their site, and on future releases.

Far from its monochromatic implications, Black Cloud Silver Lining is a painting of bold, beautiful tones and well worth the listen.

The album opens with powerful and creative arrangements of Not Giving In and Uprising that are different from while still staying true to the original tracks. The juxtaposition between these first two tracks and the track that follows, Calvin Harris and Ellie Goulding's I Need Your Love, is easily welcomed with McNeil's haunting reinterpretation of this 2013 dance track.

Brahm's arrangement of Little Mix's Wings combined with edits by Egan and the talented voices of the "Femmharmonics" perfectly capture the bold nature of the original. Nothing Left To Say brings impressive (although not as energetic as the "Femmharmonics") solo performances by the "Mennharmonics"!

A thoughtful though rushed fusion of Can't Hold Us and My Songs Know What You Did In The Dark keeps the interest alive through the middle portion of Black Cloud Silver Lining. Waiting For The End allows The Pennharmonics to cut loose and play with some uptempo unisons leading into a deeper, richer solo than the original track — making it their own. Five Spice Records' adaption of Grace Potter & The Nocturnals' Runaway is powerful and textured, filled with emotional intensity.

Murray and McNeil's arranging, Egan and Cheng's mixing, and the talented voices of The Pennharmonics combined with soloist Radler Kelly make Give Me Love one of the strongest tracks on the album. Then, Black Cloud Silver Lining finishes with a luscious version of Justin Timberlake's Blue Ocean Floor that ties the entire album together.

Black Cloud Silver Lining fits perfectly amongst some of my favorite collegiate a cappella albums! If you haven't checked it out already, I highly suggest purchasing this release.

With Black Cloud Silver Lining, the latest from The Pennharmonics, group directors Victoria Brahm and Rob McNeil (Assistant) deserve a lot of credit for putting together an album that actually feels like an album. Despite varying arrangers and soloists, there's enough of a similar feel that everything works together without getting stale. The Pennharmonics also do an excellent job of both presenting less-covered hits from common a cappella favorites (Imagine Dragon's Nothing Left To Say, Justin Timberlake's Blue Ocean Floor), and attempting to breathe new life into songs that have been covered extensively (Uprising, I Need Your Love, Can't Hold Us In The Dark).

Unfortunately, Can't Hold Us In The Dark falls flat for me. The mashup idea itself is clever, but the performance suffers from the decision to record the song 15-20 bpm faster than either of the songs it draws from. It ends up feeling too hectic and makes the rap segments nearly unintelligible. I Need Your Love, on the other hand, is a stripped-down, refreshing take on the song, though the group should have given a nod in the liner notes to Jake Coco and Madilyn Bailey who recorded the version actually covered. The track also features the strongest solo performance on the album, courtesy of Olivia Jones's soulful and mature lead vocal. Uprising, with a strong solo provided by McNeil, also fares better and is easily the best arrangement on the album. The song is well-paced, makes great use of the group's dynamics, and cleverly ties in Pink Floyd's Another Brick in the Wall (Part 2), which works musically and thematically. Again, though, the liner notes don't mention the inclusion or Pink Floyd anywhere. While none of the songs on this album are correctly credited to the composer(s), Can't Hold Us In The Dark at least has both original artists listed in the liner notes.

The rest of the album is solid, and the soloists across the board seem well-suited to their songs. The group blend is also excellent, although the mixing occasionally overwhelms the solos or emphasizes certain parts in a way that feels a little heavy-handed (the bass line in Runaway, for example). Overall, The Pennharmonics should be proud of what they've produced on Black Cloud Silver Lining. The group clearly had a unified vision going in, and the energy present in every song proves its commitment to that vision. I encourage the next generation of Pennharmonics leadership to continue this level of group integrity; it comes across powerfully to listeners.

For a physical copy, send an email to thepennharmonics@gmail.com.