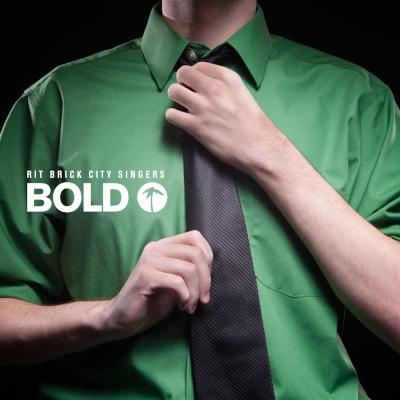 Bold is a perplexing title for an album by a group of Hawaiian-shirt loving guys singing together in one of the coldest parts of the country (this would be the Brick City Singers from Rochester Institute of Technology). True, the debut recording from these singers is a bold statement to the a cappella community. Unfortunately, it probably isn't the type of statement that they wanted to make. Being bold does not automatically equal being good.

The album's sound production is deceptive, because upon first listen to the opener, it is very intriguing. The group decided to go with a very natural sound on the recording — no disguising the fact that these are developing male voices blending together to create what you hear. That decision fits extremely well on The Bidding. The eccentric Beck-ian nature of the song lends itself to a bright and buzzy sound in the backs, a modified electronic filter added to the soloist, the forward mixing of the individual auxillary parts and minimal reinforcement from the lip-buzz drumming. And I thought: we are going to have a winner here. But I was wrong, because after this track, the flaws in the musicianship come to the forefront.

Without a lot of studio tricks — of course there are some used — the masking of various vocal issues doesn't happen. On many of the tracks, the guys struggle with blend. Vocal sections are within the relative allowance of proximity, but they usually don't stack nicely. An occasional disappointed remark escaped from my mouth on particularly egregious moments that caught me off guard. From my own past experience, often it's as if a certain line in an arrangement was left up to a particular singer to get right, so his voice is mixed high enough to cover up the wrong. Though, it seems like the guys have it in them to be good because the opening/closing by the choir in Everytime We Touch nails it and most of I'll Always Be Around is gorgeous.

I want to point out that John Lavalley has an incredible vocal instrument. He solos or duets on four of the ten tracks. He impresses and blesses me on I'll Always Be Around and saves the group on a really horrible version of Fat Bottomed Girls. He's definitely one to keep an eye on in the future.

This recording project started out as an EP, but through crowd-funding, the group had enough money to produce a full album. I'm all for more music on collegiate albums, but I'll always wonder what could have happened if the guys kept it at the smaller size and spent that extra money on more extensive production work. The guys can be proud of this debut, but if they are truly going to be bold, they'll need to step up their arrangements, musicianship, and production values.

First things first: groups need to write liner notes! This is the third consecutive downloadable album I've received without any credits whatsoever. Neglecting liner notes is disrespectful to the composers, arrangers, singers, and producers of your music, and makes it darn near impossible to follow the creative trail. For detailed guidelines, check out this article about giving credit where credit is due.

If you happen to not be a recording musician, you can begin reading here.

The Brick City Singers got lost somewhere along the creative trail. They set out with a few smart song choices, ambitious feel changes, and a personable sense of humor that could almost make Bold a nice addition to your collegiate male a cappella collection. Almost, if not for the lack of creative direction.

The arrangements are partly over here and partly over there. Darling, It's True alternates between mind-numbingly simple verses and excessively clamorous choruses. Everytime We Touch is the most straightforward dance pop you could ask for, but almost half of it is spent in a buzz-killing choral intro and outro. Changes and I'll Always Be Around want to be touching ballads, but the ambiance gets swept from underfoot by silly instrumental "ja na" and "dim da" interjections. Fat Bottomed Girls, what should be the rousing finale, is just an obnoxious stream of "bow ba bow"s. Bland transcription, abrupt transitions, and inappropriate syllables make it so these arrangements don't often settle into the right mood and don't ever build into any jaw-dropping moments.

The singers also sound disoriented trying to get into these arrangements. The backgrounds perform without a trace of enthusiasm as they either pick their way through extraneous riffs or slog through monotonous pads. It's most evident in the ballads Changes and I'll Always Be Around, but you can hear it just as clearly in the whole notes of Smooth and the staccato "zing dings" in It's Time. The soloists sound just as uncertain as they get stuck meandering around tuning and ranges beyond their comfort zones. The only guys who consistently bring the energy are the basses (check out Soulman) and the percussionists. Otherwise, it's Brick City Singers singing their parts but not really finding their role in the creative trail.

There is an air of disorganization in the way Bold came together. The Bidding and Soulman sound like what they were going for: these two songs have the winning combination of energetic arrangements, passionate soloists, and post-production flair. There are a million reasons why the Brick City Singers might not have sung their hearts out or nailed the embellishments on the rest of the album. The liner notes would provide some insight into some of that creative process, but as is we can just make out what we can of the final creative product.

Attention other upstate New York a cappella groups: do you want energy? Do you want your audience to be primed for your own performance? Do you want punch-in-the-face pump-ups? If so, Brick City Singers is the group you want opening your big concert. Every moment on Bold just screams energy — only occasionally literally — perfect for riling up a staid audience member or two.

Tracks such as as Everytime We Touch exemplify this intensity perfectly. Starting in a soft, slow ballad like the original, they set up the inevitable "oontz oontz" club section of the song (you didn't think Brick City Singers wouldn't throw in the remix, did you?) in a way that actually makes the listener anticipate it with eagerness. Set off by the gentle ballad section, the club section resonates much more and focuses the listener on the actual musicality of the song. Pretty deep for a remix of a cheesy ballad.

I am particularly enamored of Austin Williams' soloist turn on Soulman, which is a highlight of the album. His performance is lovely and engaging. The slight hint of grit in his voice lands perfectly, belying lyrics such as "Don't have the charm of Denzel's smile". He does, and he knows it, and the listener knows it, and we're all in on the joke. The end of the track, however, roughly moves back from a produced, smooth polyphony to a rough group-sing ending. It's a strange transition and a harsh ending for a recording that I truly enjoyed up until that point.

Smooth speaks to my 1999-imprinted heart. It's one of those songs for which I know every turn, every lick, every offbeat shake, and Brick City Singers' recording does not disappoint. The arrangement deftly takes guitar solos and horn lines that are absolutely integral to the original Santana/Rob Thomas recording and translates them to voices seamlessly.

If you find yourself needing a jolt at 4pm on a workday, you could walk across the street for caffeine, sure, or you could pop Bold into your audio player of choice instead. It's a snappy album with sharply edited tracks, and will definitely make you do a little office chair dancing while you listen.